Having survived Thanksgiving 2019, it’s time to maintain E and get our Yuletide on.

My wife picks a fat 9 ft Fraser fir from North Carolina and so I pay some gentlemen to wrap and load on the roof of the modern family Truckster. There was a heated argument by the tree salesmen as to whether they could get the tree through their wrapping tunnel. I told them that since I didn’t own an F150, sale was contingent on wrapping up the tree and getting it on the roof. Three guys failed pulling it through the tunnel. Not to worry, because one of the proprietors fetched his FWD GMC crew cab, attached the tree with motorcycle tie downs, and pulled it through with ease. I had my wife and kids stand well away.

Of course it was dark when we got home. I untied the lashing and attempted to roll it off the roof, at which time it removed a good chunk of my right cheek and destroyed a pair of glasses.

I managed to use an appliance dolly to half-drag it into the living room., my wife riding me the whole way to make sure that I didn’t scrape the floor with what felt like 200 lbs of whip ass. Mounting the stand and uprighting the tree could have been made into a documentary, but suffice it to say that Scarlett gave it her ninja seal of approval.

Female members of the family placated, dad mixes the first eggnog of the season.

I surprised the family when they were all out the other day by getting a tree and bringing it home and putting the lights on it. I left the ornaments to my wife since that requires more patience and attention to detail than I have. 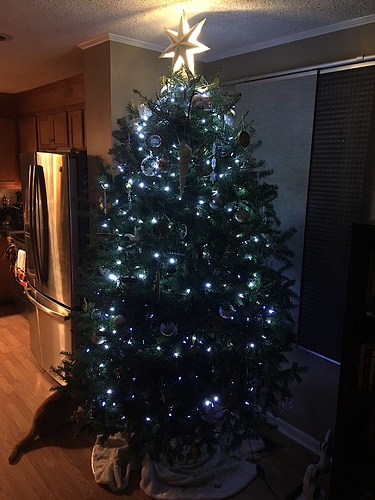 Well done, and a fine tree it is. That probably scored major dad VR time bonus points. I contemplated a similar act, but knew that the tree selection should best be left up to those most critical. I was thinking more Charlie Brown size, but knew that would get me banished to the dog house.