Sweet! That’s about perfect for me. I’ll give you a shout on discord later.

Hollo Pointe North has SRS and DCS voice chat, but Hollo Pointe standard is still Discord at the moment.

We can’t watch when you don’t show up.

I popped in for 5 mins last night but the performance for me was really bad. My machine really doesn’t seem to like the combination of Persian gulf. Tomcat and multiplayer. Proper shame I was looking forward to seeing your new mission

I tried to drop by as well but was kicked after about 30 seconds. I seem to only have real luck connecting if there are no players in the server.

What’s your hardware specs?
A shader cleaning if you haven’t recently may help too because of all the updates - just zoom around the maps in the free cam in SP first to generate new shaders before MP. Is your ping to the server okay?

I seem to only have real luck connecting if there are no players in the server.

Same hardware / shader / ping concept here as above for Victor to start. Does it run okay if you join solo?

The reason I ask is while the PG map is itself definitely more taxing on a system - Divine Falcon as a mission is presently less demanding to the server than Offensive Posture(Caucasus) as it has less simultaneous ongoing action (but more overall).

Have either of you guys been able to join ok for some of @WreckingCrew’s PG missions such as:

Hmmm. That’s interesting as I dont normally have any problem with OP. plus keyhole etc runs fine.

That shouldn’t be necessary, the shaders are compiled during the loading screen.

Are they? I thought they were a compile-as-needed situation.

I just like to have to whole map pre-loaded, a fly around gets textures into RAM nevertheless. Then going SP to MP it’s already cached.

Not particularly familiar with the Red team’s GPUs.
How much VRAM on that card?
I7 - what gen/model? Overclocked or stock?

While 16GB ram can easily change to 32gb, I am thinking maybe asset counts could be pushing the GPU and/or CPU up to limits combined with PG being more taxing.

Server itself doesn’t have to render anything, so it’s only taxed by tracking all the AI units and the map doesn’t affect it too much.

One interesting thing i have 32gb of ram but everytime I fit it the system crashes. If I swap the ram sticks around it makes no difference it only seems to like 16gb of those combinations. I might buy 2x 16gb sticks and see if that changes things but I assume one of the sticks or ports is bad.

With two good sticks you can try slots A1B1 and then A2B2. If the system crashes in one pair of slots, one of those slots is bad. We had this happen to my brother’s PC after I had to re-seat the processor (old thermal paste was a bit messy) when his cooler failed, must be a pin that isn’t contacting the processor right as any time we put a RAM stick in slot 4 his system fails to boot - doesn’t matter what stick.

There’s a lot going on and spread throughout Divine Falcon. I built it with my old i5-6600k on 16GB of memory, so I know your system specs should be good enough. Did you try it with the Mi-8 or Harrier?

Are they? I thought they were a compile-as-needed situation.

I got a AMD 8120, with a Nvidia GTX770 (2GB) and 24 GB of ram, with DCS running off a solid state drive. I didn’t have any issues running any of the other missions. I did in the past have issues loading missions from Nearblinds server on PG at night.

Well you likely are OK on RAM, but single core processor performance and GPU VRAM is low.

I didn’t spend much time on PG with my old build to get a feel for it on older hardware. The info helps as I can rule out network and server performance issues. Does single player on the PG map play any better?

I had loaded Off.Pos earlier in the day incase you gents are around again, so that should be running for now.

) Primarily a ground attack mission, but there are plenty of bad guys flying around looking for you if you go looking for them. 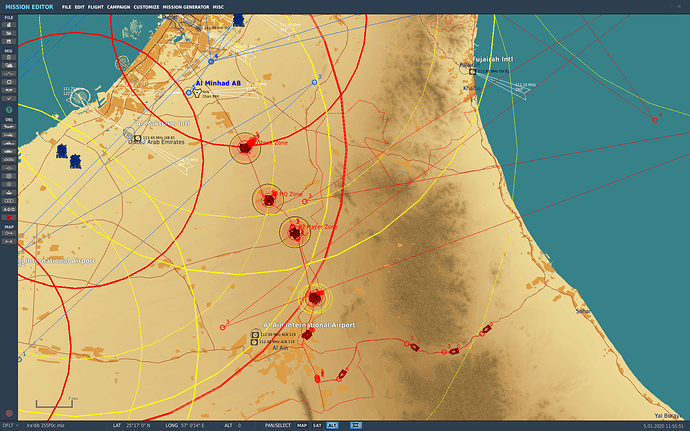 The faster jets can change that -

I still need to add in the a/c clients, and some triggers, and then put fresh veggies on top -

Combined Arms can win this…

Links are aggregated with some nice new cables that are CAT6, should keep things running smoothly. Grey - my PC, Orange - HPN.

Simple Radio Standalone has had some new updates again, so please if you are a user of this awesome add-on - update to 1.7.2.0 which will now allow you to see how many players are on the same frequency as you!

From the server side of things we now have a frequency that can bridge across coalitions with the security enabled. I have selected the aeronautical emergency channel of 121.500Mhz AM for this purpose. As from a previous update, you can also do a mic-check on 120.300 or 247.200Mhz AM.
These three frequencies are now listed in the server description, visible from the server list browser.

Just a reminder to let me know which region you belong to and I can add you to our “@ NorthAmerica” or “@ Europe” roles - which you can then ping others in the same region to meet up and fly!

You can also let me know if you are a user of SRS, as we now have “@ SRS Users” which will mainly be used to make notes of updates to SRS and when I update the server so that in the event of backwards incompatible changes you can be certain what version the server is running. You could also ping this role for help with SRS.