Currently using the Thrustmaster T.Flight Hotas 4 for a few years now, but I have some cash (not warthog cash) burning a hole in my pocket so looking at upgrading. I’m very close to walking into frys and having them pricematch this: 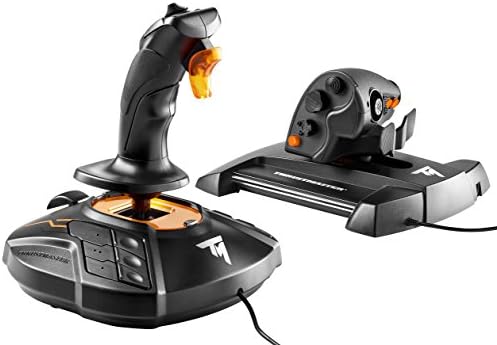 This is a very reasonable price, and it seems to provide some upgrades to my setup that like the additional hat switches and axis. Do any of yall use this setup? What are your thoughts? I watched a few reviews, it seems like a decent product.

Secondly, I’ve been considering getting TrackIR, but I have a couple questions.

I sit about 7 feet from my TV when I fly, will the sensor work well at that distance?

Give me your thoughts on IR head tracking vs using a the mouse and POV hat.

Barring VR, trackir or cheaper alternatives such as EDtracker and facetracknoIR are excellent immersion amplifiers. They completely destroy both the mouse and abusing your trim hat for viewing. There’s no substitute for having your neck tell you where you are looking. VR is better, but comes with a rather large performance and resolution penalty. Some people prefer headtracking over VR for that reason.

The thrustmaster set you have selected is said to be an excellent one. The stick uses the same sensors as the warthog, so it matches it for precision. If I hadn’t been able to get a Full Metal Hog on the cheap second hand, the t1600 would be what i’d be driving now.

That said, take a look at the 2nd hand market for hogs. These things are almost indestructable and repairable to boot. Perhaps we on the forum could chip in a little to get a vet his hog?

Good points here, I’ll check into the used stuff. The price factor on the warthog isn’t necessarily because I can’t afford it, I just can’t justify that kind of money on a peripheral. Wife would kill me. At least the old “out of sight, out of mind” adage applies to the pc components. She never sees them. Hard to hide a massive new Hotas.

Because of how you can set the curves for the tracking, it diminishes the awkwardness of turning your head but still looking at the screen. For example I have increased the sensitivity for looking up/down for panel viewing because it was too big an angle to do it effectively (sensor actually stopped tracking because I had to tilt too much).

You can do this for all axes to make it as responsive/unresponsive as you need. It’s pretty sweet. As for distance I’m not sure. That’s best checked via Google or the natural point site.

I was curious about the TrackIR range thing so I tried it 7 feet away from my monitor with my TrackClip. It works but you have to turn your TrackIR camera’s IR brightness up (no big deal), and you have to make sure the camera can’t see any other bright light sources. 7 feet is really stretching it though as your camera’s sight picture of your clip is pretty small so your head movement range becomes diminished. It would be ideal if you could bring your range within 5 feet. If not, I’d start thinking about building some sort of tray that you could rest your camera on closer to you but out of your line of site to your TV but still directly overhead or underneath your LOS so that it’s centered.

Thanks for testing. I could probably just put the sensor closer, I didn’t think about that.

It is a good set.
I like the accuracy of the stick: I initially selected it for weak springs and high accuracy (helicopter flying!) but the drawback is that after a while, the stick hangs slightly to the left of the center position when you let go. This is only noticeable because of the high accuracy of the sensors and can be fixed by setting a larger deadline, but still.
Also, I read people online who complained that the stick is quite big. I have big hands, and it fits perfectly.
The buttons do feel a bit cheap though, but that is mostly a problem for the buttons and slider on the base, which you won’t use much if you also buy the throttle.

The throttle is even better than the stick. Loads of buttons, a rocker for rudder in case you don’t use pedals.
I came from using the terrible slider on the stick, so I love the small adjustments that are possible with this throttle. Great for AAR or Mi-8 flying. There is no detent, very important for hell’s.
Only downside is that the throttle can ‘stick’ a bit: it takes a bit more force to set it in motion when it’s still, and barely requires any force once it’s moving.

About TrackIR: it’s great to be able to look around in sims while using your hands to fly. Make sure you get the active (Pro) version with the LEDs, not the hat clip with reflectors. Especially if you are sitting at a distance from the sensor.

If you think you will be getting a VR headset soon-ish, it might not be worth it: TrackIR Pro is quite expensive and the alternatives may be difficult to get.

I stopped by and picked it up the T.16000 today, got it price matched to $99. Quality seems way better than the T.Flight Hotas, well worth the money in my opinion. Now off to binding it…

yup this is going to take awhile, I’m assuming I have to make a target profile giving all the buttons different ID’s? Is that why Joy Btn 1 is on both the throttle and the stick?

Nevermind, the buttons are just labeled btn 1, but can be used separately, as well as the axis. I’m Makers Mark is not helping me tonight.

If anyone wants a TrackIR, I have one I’d like to get rid of. VR ruined it for me, but never really got the hang of using it anyhow. PM me if your interested, we’ll figure out something fair. (Hope I’m not breaking any forum rules here)

I got the TrackIR set up thanks to @piper. Can confirm it works from several feet away. Just need to tweak the settings, but its working.

Hey @Gunnyhighway, I was looking into how to position my TrackIR camera for high and low positions (because I’m using a 60" monitor directly in front of me now) and found out you can actually put the camera directly behind you and invert the axes! Not sure of your situation but it’s an option …

solid idea right there. A long USB extension to a splitter or just using the pass through on the track clip pro would probably work. Thanks.

Linebacker is full of good ideas. You are hired my friend.

I did that when I got the 34" Ultrawide curved screen.
Putting the TiR sensor behind you worked really well, and solved the problem with jittery movements when leaning in on the screen. With the sensor in front, leaning in meant coming too close to the sensor, at an angle, and that always made TiR hard to use when I wanted to have a closer look on stuff.
Moving the sensor behind meant that leaning in increased the distance, and problem was solved!

But since I went VR, none of that matters anymore. I gave my TiR to my brother

Wish you had mentioned that about 10 years ago mate

solid idea right there. A long USB extension to a splitter or just using the pass through on the track clip pro would probably work. Thanks.

Yup! No problem. Here’s what I just did BTW …

Works GREAT! This even seems like a more logical position to place the camera instead of at the top of the monitor because you kinda always sit in your chair exactly the same way. I’m going to paint it black and put velcro at the back of my office chair for it tomorrow …

BTW, I just use a Trackclip velcroed to the top of my headset. I used to have a Trackclip Pro but it broke as they normally do but I’ve found the Trackclip works just as well and no wire!

Just a note - may not be an issue for you but this was something that helped me - when I increased the number of peripherals (from HOTAS only to TrackIR, HOTAS and pedals), I got a bit of button ‘ghosting’.

I turned @Rhinosaurus on to the switchable ORICO 3x3 USB hub a year or two ago but they stopped making THE BEST powered USB hub!!! 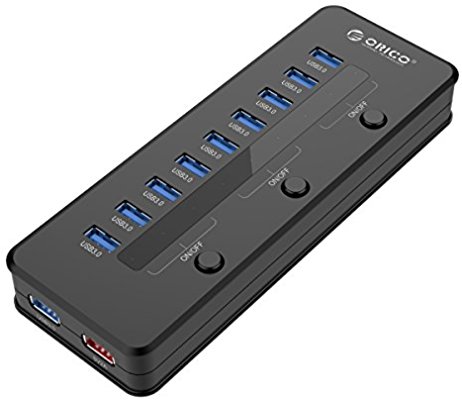 I actually want to buy another one for that warm and fuzzy feeling that $50 bucks can buy you but they’re nowhere to be found!

More good ideas from you. Now I got to go to Amazon and get that.

Here is a tip. Put a mirror on your door. That way you remember to remove your hat before the Pizza man looks at you all crazy. I’m not talking from experience or anything. I have only been to the supermarket Once with TIR clip on my head.