How to intercept a tanker

Is there a clever way to join a tanker for air to air refueling without wasting fuel and time?

I had some thrilling moments in the past with the Hornet and Tomcat when my inefficient rendezvous gave me very little fuel before I finally got even near the basket. No pressure

Especially when I try to intercept a tanker with head on aspect I’m never sure when to lead turn to come out right at the left wing. I follow my gut feeling but maybe there are some rules of thumb you’d like to share.

There are procedures to do that, and they are even available on the Internet I think!
starts searching…

Can’t find it (I am not at home, using my phone right now) but it was a document that contained similar stuff like the diagrams in this article:

This could also help:

Air to Air Refueling Introduction… Purpose The 1 st VFW prides itself on realistic training and procedures. Current NATO standard procedures are detailed in ATP56/B which came into effect 1 April Since Falcon is based on procedures and brevity from...

Sorry for double posting, I can’t edit my post for some reason…

ATP3342 would be the latest guidance…
But from fighter perspective you do whatever necessary to join formation while being safe. So do some of that pilot stuff. Typically to lessen wasted time, fighters would request tanker to fly towards direction of where fighters are coming from. Then fighters would do high-g turn to burn off energy and position to whatever position boom operator requests…be it left wing observation or in trail.

…at which point the lack of AI and communications in DCSW becomes an immersion breaker. Again.

Seriously, those tanker crews in DCSW are… not exactly great at their job. Not very cooperative.

Thanks for the input so far. I’ve checked the slides and ATP 3342 (and even ATP 56). They describe the general procedures but are not very specific on the pilot technique for rendezvous (RV).

There are multiple RV procedures (Alpha to Golf). I learned in some of them even the tanker will do all the work and join up with the receiver. I think we will never see this in our sims but that’s not an issue for me

Let’s assume I found the tanker, he’s 20 nm in front of me an roughly heading my direction and will fly straight and level. How do I “calculate” when to initiate a turn (other than just estimate and turn when feeling appropriate).

other than just estimate and turn when feeling appropriate

Due to the way pilots get trained…this process becomes very natural through experience. You can try to find AFTTP3-3 KC-135, But those techniques are tanker to tanker rejoin.

How to intercept a tanker ?

I’d say first of all is to know and respect your bingo setting. Have a contingency and buffer for x amount of time and so on. Second, TACAN and knowing where the tanker is going relative to you. Stuff like speed might be harder to gather here; I have settings I prefer to use in missions to keep that part consistent, but otherwise they can be defaulted to a pretty damn slow speed. Lastly, being patient and not going to maximum thrust.

Can’t speak for the real world, just know what works in DCS. Give yourself plenty of room to work with and get the tanker visually, then go from there.

If you have a radar you run a stern conversion intercept. Later I’ll post some more words/ a reference pub if I can find d it

How to intercept a tanker ?

Talk about getting a hot foot.

A question about peacetime air to air refueling. Last night after installing the stiffest springs in my Virpil base, I tried some formation flying and refueling in the Tomcat. In the Quick start > F-14 > Nevada > F-14B AAR, I jumped on the boom… 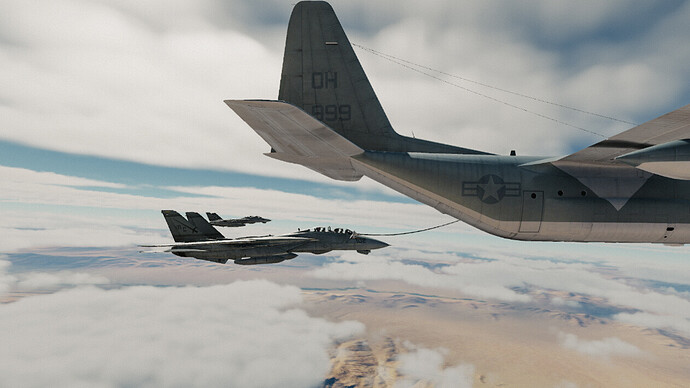 Once topped off, I slid to the reform area. As I moved to the right, I became aware of a pair of Marine AV-8Bs hanging out in the reform area. I hadn’t noticed them before. Hey, what are those jarheads doing there? 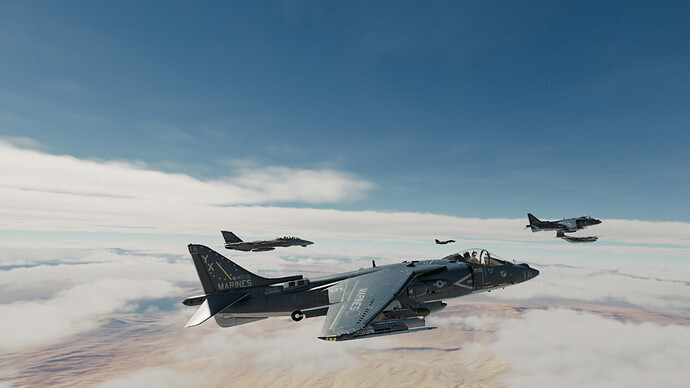 Given that I should have looked before sliding in their direction, my question is, do aircraft ever form up on the right side, even if they are waiting to refuel? Or does the conga line always begin on the left, observation area, and then move to the reform area after getting a drink?

do aircraft ever form up on the right side, even if they are waiting to refuel?

Generally speaking, no - the area to the right and above the tanker would be for aircraft already complete and/or departing the tanker. Even if you were joining from the tanker’s right side you would typically be expected to cross well under to the left side and then finish the join from there.

You can always deviate from normal procedures, provided you’ve got a good reason, but you’d definitely want to be talking about it so everyone in that formation is expecting it. Keep in mind real-world this has to work between different services (IE USN, USMC, USAF, etc) as well as mixed nationalities so it all has to be fairly standardized.

I forgot I once started this topic.

Coincidentally, Tactical Pascale recently released a video which kind of answers the original question in the DCS context: