I Have Seen the Future (A Decade Late)

Do any of you ever wonder how you are perceived on this forum? Maybe you realize that sometimes you can be a little too opinionated or hold a defense that borders on being stubborn, even confrontational? Or perhaps you find that you are not as open to new experiences or ideas as you should be? Most likely, you are not half as self-absorbed as I am and so you rarely ponder such things. For you, maybe Mudspike isn’t about you. It’s just a hub for the shared love of this hobby in the company of (usually) like-minded people.

The sword I had chosen to fall upon was (ready for it?): Orthophotos. I just now wrote damn near a dissertation as to why my change of heart. But really, who cares? The thing is, FS2020 is coming, and now that I am using orthos I have a hard time seeing how anything can survive this onslaught that doesn’t trash the old hybrid form of texture placement and photo-based tiles. After filling a 1TB harddrive with either “Forkboy2’s” orthos or rolling my own, I am finding waking up next to DCS and IL2 an ever bleaker experience. The terrain textures which were once plausible, no longer are. I love those sims too much to let aging beauty get in the way. I will dig deep to keep the relationship going. I re-embraced Falcon BMS despite her generation-old terrain and lack of VR support. I am faithful if nothing else but like the old couples say, “you gotta work at it.”

The following are X-Plane shots from a series of flights I made today from “Nine Mile” near Missoula, MT to Wurtz, MT (near the border with BC). I am–at long last in my sim life–exploring real places. And it is this sense of exploration has totally changed what it is that I am seeking when I choose to virtually fly. I can now look down and appreciate how lovely it must be to live above that river or how hard it must have been to build a farm among all the gullies. I can wonder if that mountain gets climbed regularly or why this fresh water lake is so incredibly clear. I can stick my head out the removed door of the helicopter and feel the rush that comes with looking over the edge of a precipice. It has all become so real. Now I know. Just a tad late.

These were all taken using my modest VR graphics settings. So as screenshots go, they are not as well detailed as they could be. What I really wanted to point out is how well Global Forests North America, Vol 2 placed trees. It is pfm to me! 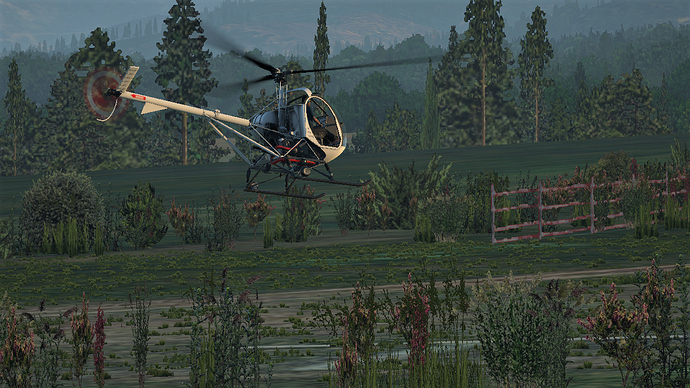 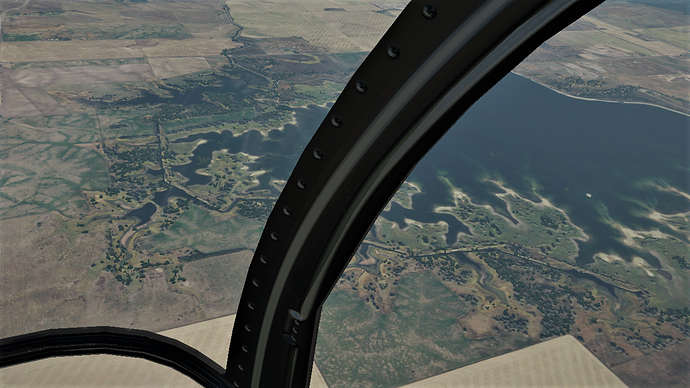 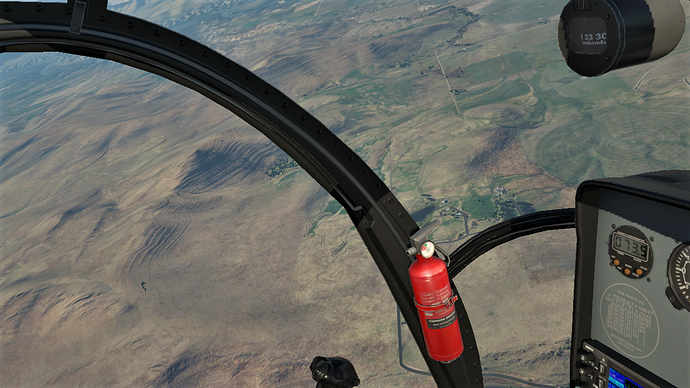 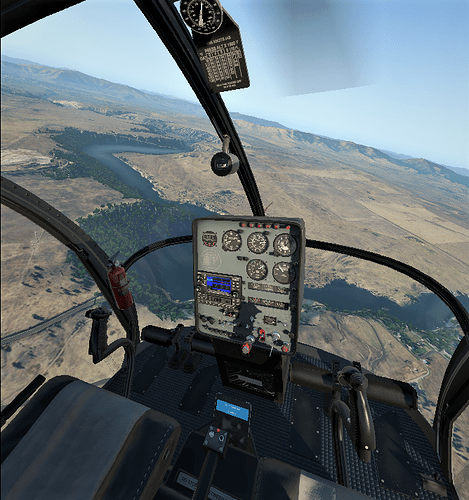 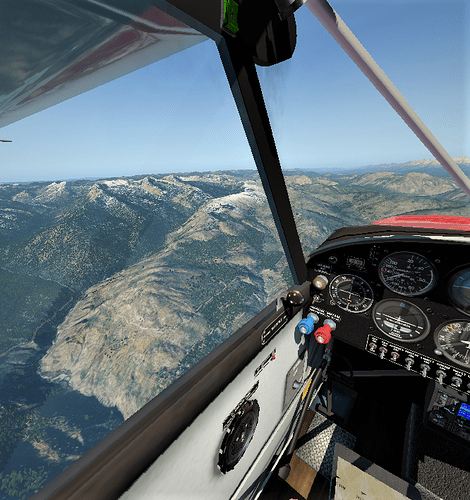 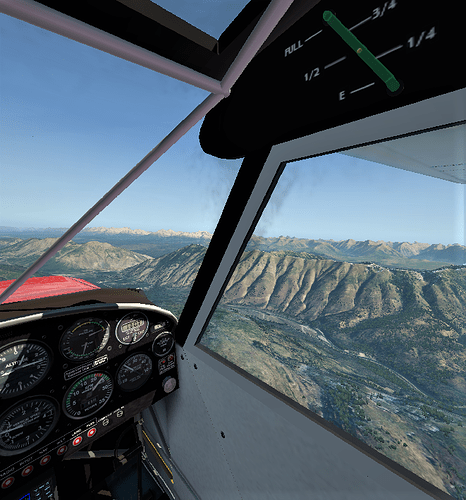 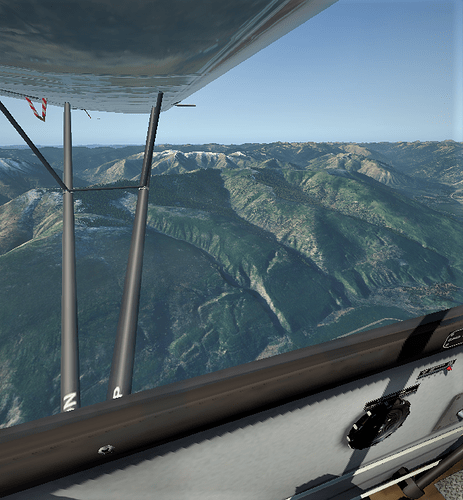 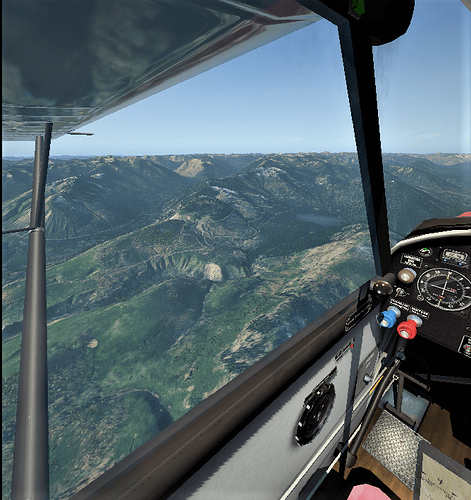 Whoa superb shots sir, I can see why you love you your orthos. It blows all other sims out of the water. I wonder, can you have dogfights in there? Bomb things?

Me, I hardly ever wonder how I’m perceived, but I must admit I work on being as cool as I can be on the internet. Want to make it awesome for me, you, everybody! A small social medium like this is always about more than just ‘what it’s about’.

I see you guys as my friends, comrades. Those who understand and share a great and deeply held passion. I feel honoured to post among you guys as a peer and fly with you all.

In a sense Mudspike for me is about me. About living the dream of being a pilot, being amongst pilots, to talk about flying and planes and such with people who live and breathe them things too.

I can now look down and appreciate how lovely it must be to live above that river or how hard it must have been to build a farm among all the gullies. I can wonder if that mountain gets climbed regularly or why this fresh water lake is so incredibly clear. I can stick my head out the removed door of the helicopter and feel the rush that comes with looking over the edge of a precipice. It has all become so real.

Preach it Brother! I was flying VFR down to some Idaho forestry strips the other day…and enroute I was just staring straight down most of the way marveling over the little farms on plateaus or along rivers - knowing that each one was unique and special due to ortho type generation. And all the curious man-made formations and places…the southwest is rife with things on the ground that make you wonder what weird technology they are testing or what secrets they are hiding.

Your screens look great. Love the steam gauge Husky too…even though it is a bit flat with regards to panel modeling (they are more like pasted on gauges)…but who cares…we are looking out the window anyway!!

Thank you! You are way too kind. I would argue that they are actually mediocre shots taken of a spectacularly beautiful and real place.

Responding to @schurem below: Well it is a mostly automated process with Ortho4XP but it did take 14 hours to generate at a zoom level of 17. Plus I grabbed the two airstrips which were painstakingly made by a guy named “Wookie1” (both free).

A place you cobbled together from bits and bobs then photographed looking as real as it does. Nice work man!

awesome pics. Ortho is a must have for xplane, as is VR hand controls. Forkboys stuff is extremely well done, especially considering the touch-up work required to make so many tiles work seamlessly like they do. One of my favorite parts of Xplane is the amount of extremely high quality freeware. I’m sitting out on MS2020 until it has VR, but i hope it has similar freeware capability.

One could argue that the zibo 737, forkboy ortho, and some of the high end free airports are better than most the payware modules.

the southwest is rife with things on the ground that make you wonder what weird technology they are testing or what secrets they are hiding.

I’ve been playing this “look out the window and wonder” game for more than half my life. But I’ve been doing so from 37000’. Google Earth VR helps for closer exploration. But 1) It’s not flying–I mean not even close! and 2) The scale is way off. I wowed my daughter by letting her fly over the canyonlands and Orange Cliffs of Utah. She was both awed and surprised that they weren’t really all that massive. And that’s true. If you are an easterner like me, raised on TV and movies about the west, you have this sense of bigness that is simultaneously legit AND misleading. The only way to know for sure is to go there or get X-Plane and buy a VR kit.

I wowed my daughter by letting her fly over the canyonlands and Orange Cliffs of Utah.

25U (Memaloose) is a nice little “off a cliff” takeoff to the south.

Maybe you realize that sometimes you can be a little too opinionated or hold a defense that borders on being stubborn, even confrontational?

You could’ve just tagged me…!

I do like and prefer a good ortho myself. But even if the terrain in IL-2 can look almost cartooney at times, I still don’t have a problem with it. As long as There’s no obvious texture lines or pops, I can fool my naive little brain to buy into the concept. Same with DCS, which has the benefit of really detailed low level textures and details. It kind of works and I can stay immersed even if it doesn’t look 100% real.

Looking forward to see how the MSFS dudes have done it…

It kind of works and I can stay immersed even if it doesn’t look 100% real.

Definitely part of it. I can play EECH, Strike Fighters 2, VTOL VR, or DCS World and sort of shift my expectations. I feel bad for “kids” growing up today in that they will come into this sim thing with ortho and HDR and all these awesome effects…and they probably won’t be able to hold their noses to play the “classics”. Maybe that is a good thing too though…forge on with a new base expectation and hopefully it will just keep improving.

I honestly can sit and look at the details on the aircraft for so long I lose track of time. They are what makes the sim for me. The scenery is just the place I go to enjoy the aircraft. It doesn’t really matter to me to be honest.
As for perceptions of people on Mudspike towards me. I came here because of the DCS tomcat thread. I had only dipped my toe into DCS with the free steam su25 etc. I had literally (in the truest sense) zero Internet presence at the time. But I found a group of people from all over the world, with the same almost rabid fascination for aircraft both real and simulated. A nice place where I could talk the way I wanted to about the things I enjoy with people who didn’t mock or belittle me and taught me things and listened when I had things to teach (infrequently lol) I have always hoped that I come across as genuine and honest. I don’t like to argue and when things do get heated occasionally I try to be a calming presence. I hope that comes across.
I even post pictures of my kids on here without any worries or concerns because I genuinely feel like I’m sharing with friends. Even have a couple of you on WhatsApp. I like it here.
But…I really get wound up talking about cruise ships…I can’t help it.

It’s true that we fly the plane, not the terrain.

but… we spend a lot of time looking out of our virtual aircraft ogling at the terrain, which these days is simply stunning. For me, a favorite thing to do is running around the Mach Loop in Wales in the JF Hawk with the OrbX TE scenery, cranked up as high as I can while still getting smooth VR performance. Another is to fly over the Axe Valley in Devon, UK, where I grew up. It brings back a lot of memories. It is amazing to me that flight sim scenery can be that good for an ordinary little area of the UK.

The exploration has paid off. For among all this alpine beauty… 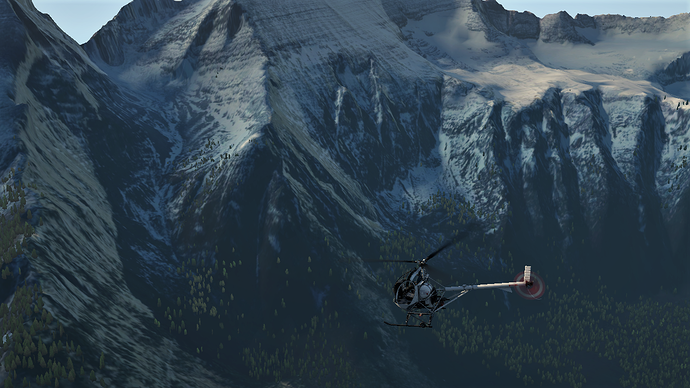 I have found the Great Scenic Wall of Canada!

And now we wonder, how many Canadians secretly wish this was a physical reality? 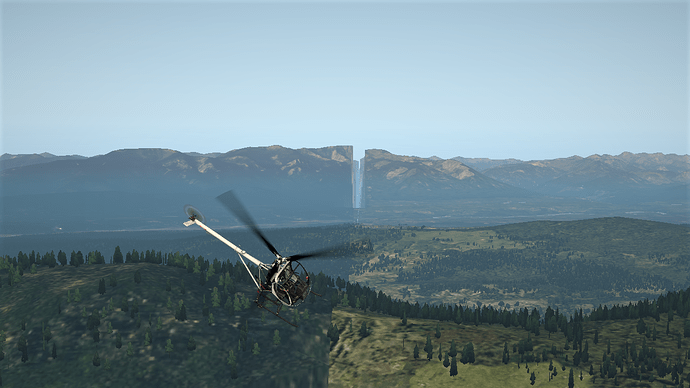 Maybe it is? Did you check…? 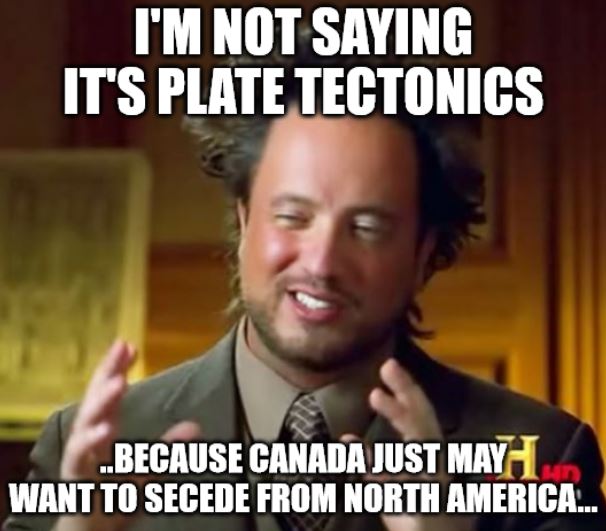 Are there sharks with lasers swimming in the bottom of it?

Really great views. What I hate about this year is hardly having flown. I still love looking out at the world. I really miss Scotland and the mountains. These were taken from my old aircraft by the fleet captain Peter Scott who also shot the video of my wedding. Some of the east cost shots near Berwick were flown by me 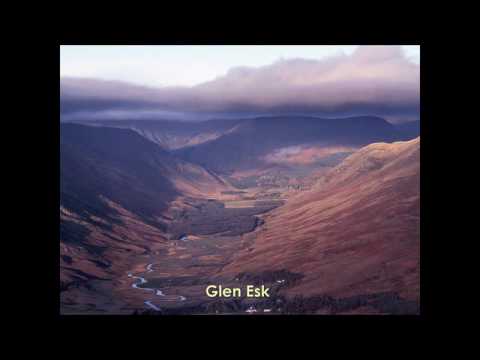