I want you thought on these 2 GPU's

I am leaning on the 2080Ti because it has the same vram ddr6 but it has 11gb and the 3070 only has 8gb, I mainly play DCS,No Mans sky and Elite dangerous.

just looking for a mid life upgrade for my GPU as I had it since 2017-18? thnx for any thoughts…

I’d wait until the RDNA3 mid level cards come out and decide then, but that’s still a couple of months off.

+1 for what @sobek says. It seems like Nvidia is keeping prices high on the RTX 40 series because of the huge stock of RTX 30 cards that they still have.
AMD does not have such a huge stock of old cards, and could, if their supply is strong enough, undercut Nvidia and cause all GPU prices to fall. Their initial price announcement for the RX 7900 looks good.

But yeah, that is all uncertain and a few months away.

If you are planning to use this card for more than just this winter, I would recommend comparing not just purchasing price and performance but also sound level and calculate energy costs.
I had a look at a test run by a local good reviewer and they measured 214 and 279 Watts used by resp. RTX 3070 and RTX 2080Ti during a Tomb Raider benchmark where the fps difference was less than 0.5 1 fps on 60 fps total.
That is 65 W of energy wasted, that also needs more cooling and fan noise.

The RTX 3070 will thus be cheaper to operate, especially in summer when the heat is pure waste, and very likely quieter too because it needs much less cooling. Whether the increased DCS performance of the RTX 2080Ti is worth it, depends on how much you nees it and for how long you are planning to use it.

If you do go for the 2080Ti, I would very seriously consider sidegrading to a more efficient card in Spring.

especially in summer when the heat is pure waste

good point. one feature I like about my laptop, RTX3070 btw, is that I can set the fan speeds from ‘quiet’ to ‘performance’. in other words, you inspired me, from ‘summer’ to ‘winter’

there is definitely performance penalty but not that noticeable in case I have the performance on the high side normally, like cca 100fps in XPlane.

wondering if this is also possible for desktops.

wondering if this is also possible for desktops.

Yes. In fact, it’s possible to set your own fan speed curve if you have the appropriate software package, I believe.

I use a 1070GTX currently so anything I get will be an improvement. I am mainly getting it for DCS and my Reverb G2 headset… I am not looking for max Setting in the G2 just slightly to improve the performance hit in DCS 2.8 …

Don’t discount an ‘older’ AMD card if you are looking at an interim solution to get you thorough the next six months or so, especially if power consumption is an issue or concern, unless ray tracing is a must have.

Or better yet, tough it out until the end of the year and wait to see how the next gen AMD RDNA 3 cards stack up… and see what they do to Nvidia prices? I’m looking to replace my 2060S and that’s what I’m doing.

Tom’s Hardware has a recent rating on current 2022 cards: Best Overall Value - Radeon RX 6600 (just a bit behind the RTX 3060 in terms of performance). 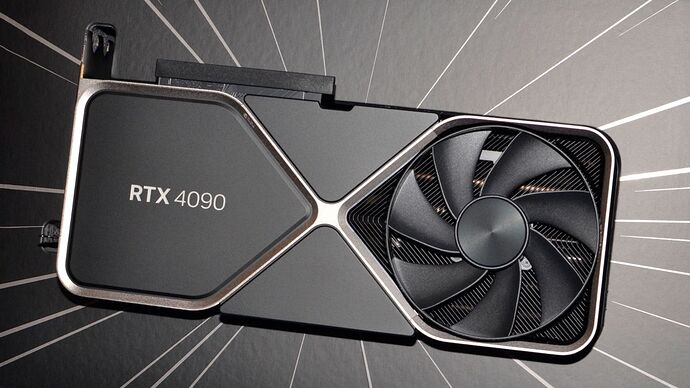 Best Graphics Cards for Gaming in 2022

Here are the best graphics cards for gaming, from high-end to budget solutions.

I will say that the G2 is pretty demanding. I have a 3080 right now (10GB) and it could use more VRAM. I’m in the process of upgrading my CPU to see if that makes the difference, but if not then I’ll be looking to upgrade it.

yes AMD not an option for me… I am trying to get a higher tier card even if it is older.

Yes the G2 is demenading if you push it. what settings are you using and what makes you say you need more vram?

EDIT: I am also trying to determine how many pixels a GPU can push theoretically. Some guy is saying a 2080ti can only push 2million and that can not be correct…

Some guy is saying a 2080ti can only push 2million

That does not mean you can run Cyberpunk at that resolution at Ultra at reasonable framerate though: specific questions like that are very much dependent on the workload.

For reference, my 3070 will run Cyberpunk at 1080p at ultra locked at 60 FPS as long as DLSS is on. If I switch DLSS off then the framerate drops to around 45 FPS. With raytracing off that goes back up to around 70 FPS. I suspect the 2080Ti will beat that slightly with RT off but probably won’t be able to keep up with RT on. I’m not sure you would notice the 10 FPS or so difference when gaming though. Or maybe you would? But I can say that the difference between RT on and RT off is very noticeable (the image quality, I mean).

I’m not happyw with current Nvidia portfolio RTX 3000 series because their RTX 3060Ti/3070 are only 8GB VRAM and prices are still higher than should be.
My 3 years older AMD RX 5700 XT 8GB VRAM has performance better (little bit) then newer Nvidia RTX 3060 12GB (except Ray Tracing which RDNA 1.0 cannot) and because personally playing on QHD and/or 4K monitor/TV I’m looking for next generation of GPU with 16GB VRAM GPUs as minimum. Modern flying simulators and future games will be more utilize VRAM because of 4K textures everywhere.

I know that VR sets are really demand on GPU power horse, therefore is better wait for newly coming generation of GPUs, AMD or Nvidia.

PS: on our Falcon BMS meeting recently I got opportunity to test RTX 3060Ti and RTX 3070 in Cyberpunk 2077, Far Cry 6, Quake 2 (RT version) and one other game which I don’t remember but RT was there. To be honest, RT looks absolutely fantastic in Ray Tracing verison of 1997 (!) Quake 2, relatively good in Cyberpunk 2077 1.61 but only in Quake 2 I can tell that RT is absolutely game changer. Quake 2, Doom 1, Minecraft those are games really good with Ray Tracing, the rest of new AAA tituls is not worste but not perfect.

well while that maybe an option for you and others it is not for me. I was buying used as it is all I can afford at the moment even $400 for the 2080ti was too much. I will save up a bit and get a better card but for now I went with a 1080Ti.

I am pretty confident it is all the card I need for now as the 1070 works rather well in DCS with the way I have it setup I get between in Open XR 40-55FPS which is perfect.

Having already ran the benchmarks of sorts in DCS, so when I put in the 1080Ti I will see what the difference was which should be a bit. I am really looking forward to the new card and it should be here on Thursday.

iirc 1080ti was very good card in its time, I believe it will serve you well

yes I am banking on it. heck I figure if the 1070 can hold up and the 1080ti is a much better card I should do very well… can not wait until thursday.

well the 1080ti is working prettygood, I was able to get too 50% and still have 45-60FPS in game with distance on medium and textures on medium. It never looked better and I am really a happy camper best 200USD I ever spent.

It appears DCS is the problem child here, but they announced multi thread yestarday and hopefullly in 2023 it will happen… but even as it is now it looks way better and smoother then the 1070 did…

I found that ED took a lot of tuning to dial in. The default (recommended) settings looked absolutely awful and I had to turn everything up by hand. I don’t know how well the 1080Ti can cope with supersampling but I found the best quality to performance ratio was using Frontier’s native supersampler at 125%. For me (using a RTX3070) this gives far better performance and quality than FSR.