As most dynamic missions in DCS involve capturing airfields, I think it would be an interesting mechanic to have to escort a C130 or C17 from an occupied base to the “new” one before you can use it. Most missions right now rely on you destroying vehicles at an airfield, landing troops there to capture it, then it opens up spawns there. Would be more realistic if it remained captured yet unusable until the ground crew arrived in a transport plane of some sort. Of course the enemy would have a chance to shoot it down.

I think that we had one like that a year or so ago. I seem to remember @near_blind, @DeadMeat and I escorting a C130 to an airbase, keeping an eye out for bandits along the way. I think that might make a cool scenario again

Was also thinking of @near_blind’s mission from a few weeks ago where we took of in eastern Georgia to hit a chem factory on the coast. Would like to re-run that one again.

I remember doing C-47 runs back in Aces High, it was always nice to have a couple fighter escorts helping out.

We talking more escort missions, or sweeping dynamic missions where there’s an AO and we’re knocking over facilities and capturing territory?

I’m happy to make more of the former. I’d love to make the latter, but y’all don’t pay me enough

Yeah like we start with one field, limited resources, limited air frame. capture nearby warehouses to gain more capability. Capture airfield to gain more air frames (after you escort crew over) etc.

I recall that EEAH/EECH had a dynamic like this, though using helicopters rather than fixed wing. You could also capture and fly OPFOR helicopters at the field/FARP.

So you talking about two waves, right? First troops to capture, then ground crew to make it usable!?
Sounds good.
Same as in AH it was in Warbirds, but it was always single wave of paras to capture and make it active.

if you wanted to make it real dicey, the ai could counter attack your capturing troops, forcing you to leave some CAS on station, while a different flight escorted the transport bird.

Maybe even a random counter attack of various size once we have populated enemy base. Cause you know, can’t have those mission creators idol.

Those Schmuckatellis really get around. I heard a lot about them in the Navy,although I never actually met one of them…

Those Schmuckatellis really get around. I heard a lot about them in the Navy,although I never actually met one of them…

I must’ve had all the luck because I met an ex-Navy Schmuckatelli when I worked on post. We had some choice words for how often he messed things up for the rest of us.

First off, I once heard a Colonel of Marines once opine that if they removed the rank of LCpl, half of the Corps’ discipline problems would go away. After two floats on LPH-9 (22 MEU and 26 MEU), I’m inclined to agree…just say’n.

Second, and more to the point. If I recall looking at the triggers correctly, the Condition field has an “Airbase Captured” value, with, I assume from the above postings, is triggered when all the vehicles and troops are dead.

To forestall a message that te airbase is captured until the wrench turner’s arrive, I think you would need an additional “Unit in Zone” and “Unit Velocity” < 10 kts (or another “the plane has landed” variable), where the Unit is your C-130/17…or Il-76…(an equal opportunity mission builder) that lands at the airfield…the zone covers the airbase.

Hmmmm… better yet…a bunch Hueys (or Hips) escorted by AH-64s (or Ka-50s) roar in and land at the airbase…playing the Ride of the Valkyries! 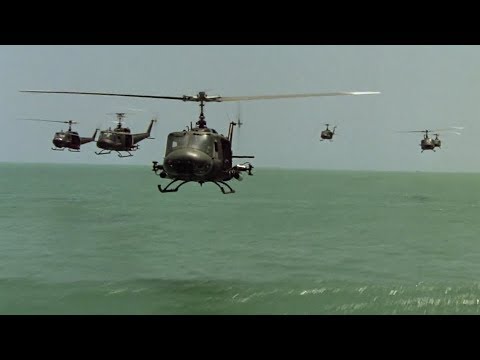 I may have to attempt to frustrate my self and try building a mission off this idea.

I may have to attempt to frustrate my self and try building a mission off this idea.

I don’t know…but I shall find out…of course I don’t have a Huey, just the Hip so instead of the Ride of the Valkyries it will have to be…

Well were off to a great start here, after learning about base capturing (farps can be captured) I discovered that UH-1’s can’t be spawned on the Tarawa (because they spawn next to the ship in mid air) and apparently the Embark command is broken.

In-game embarking/disembarking has had many problems. Learn to use the CTLD script instead. It is what the helicopter squadrons and popular servers use. I haven’t built a mission with it yet, but am going to learn it sometime next month probably.

Tarawa (because they spawn next to the ship in mid air)

Haven’t tried it but wouldn’t you set the Huey start position to start from a parking spot. If placed close to a carrier, it should just pop over to it…at least I’m pretty sure that’s the way it worked in FC1 (yeah…I’m that old).

Hmmm…this one is a thinker…

So Coalition has Airdrome or Helipad is a condition. However, this thread started with the desire NOT to capture an Airbase and have it “Open for Business” until a C-130 or C-17 safely lands there…which means, as far as the game engine is concerned All Dead = Captured…so there is really no getting around that, game engine wise

What I’m thinking of is the use of radio callas and messages so that to the human players (the wetware as opposed to software and hardware) the airbase is still “unavailable” for flight ops until that C-17 lands…and taxies and parks. There are sufficient “Units speed is less than” and “Units altitude is less than” to work that.

You can put both in the same trigger so that only one radio call/message goes out…but I would use two triggers.

The first trigger would be the Coalition has Airdrome switching it to the other side. That would send some official sounding radio call saying “send in the airbase team” or what ever. It would also trigger the C-17 to head for the airfield (either take off or cancel a circle task). Then when the C-17 lands and stops, you get the airbase ready to receive company.

which means, as far as the game engine is concerned All Dead = Captured…

Maybe I misunderstand. But blue flag has it so that Farp, airfield, city etc is not captured when everyone is dead until you drop troops into that location. If you do kill everything off and leave an area alone, it will slowly respawn enemy reinforcements to simulate the AI repopulating the area.