Issues with the Y-Axis on my VKB base

The VKB Gunfighter Mk.1 I have has been working pretty damn well for a few years now but I have hit a situation that has me concerned.

As I posted on their tech support forums with the following picture: 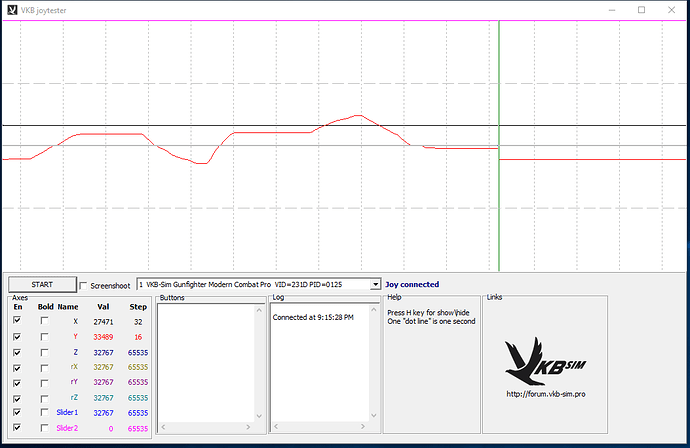 So, on the far right, I was holding the X and Y Axis off of center for one cycle of the graph. When it restarted on the left side, I moved the Y Axis forward across the center for a bit and then back. I was attempting to be smooth and as you can see, there is a plateau when I change direction, moving the Y-Axis back toward me. It appears to ‘freeze’ and after a moment (as I was continuing to ‘pull’) it suddenly became ‘unstuck’. At the bottom, I again switched direction and just after I crossed the center, it again became stuck but this time as I was continuing to push forward. Again, it became unstuck and after this, I began pulling back towards myself.

It is not ‘lag’, it seems as if the sensor gets ‘stuck’ reporting its position and then suddenly remembers what it was supposed to be doing and catches up. This event is not displacing the center of the stick, and by this I mean that it is not ‘freezing’ in a way that it then reports an offset but with continued movement it returns to function reporting the correct values for the position.

Here is an example where I was attempting to go diagonal from the top left to the bottom right. This is hard to do and not generate false data where you may think you are moving in a diagonal but are not. Here you can see it ‘stick’ and then suddenly ‘free’ itself:

I am a little annoyed. The hardware is pretty darn good. I have been happy with the base for a few years now (2 years + a few months). The Modern Combat Grip Pro is a pretty swell piece of kit, as is the Kosmosima grip. but VKB has been pretty slow when it comes to stock (luckily, because I am able to jump on the stock when it was available) and their throttle is probably going to be released in 2020 (or 2021 at this rate).

Does it happen reproducibly? When you power it off and back on again? Happens just in one axis, right? Did you set or is there a deadzone on the Y-Axis?

Could this be a blown capacitor on the sensor board?

Are there any electrolyte caps on that board? I would be surprised to see any, TBH.

Could this be a blown capacitor on the sensor board?

Maybe the Flux Capacitor!!…and once again I’m not helping, am I…

I don’t think so?
Probably ceramic.

I will try unplugging the stick for a bit, then plugging it back in and see if it persists. I did not think of that. It is only the Y Axis and the first thing I went looking for were the deadzones - couldn’t find any that were set up in the game or the joystick software.

If it keeps failing, I will take it apart this weekend and have a look see. Last time I had an issue, a quick re-seat of the connectors was enough to clear it. Hopefully that will continue.

Gah! I don’t want to be one of the few (first?) Mudspike members with both the VKB and VPC sticks and bases. That’s too expensive to maintain

The point is those age much better. Blowing caps is usually a power supply issue where electrolyte caps are used to implement lowpass filters for larger currents. The electrolyte is prone to aging in the heat of the power supply and so at some point the cap shorts and blows up.

Ceramic caps are usually among the more resilient devices on a pcb, with the semiconductor stuff blowing up much earlier.

Yeah, I see your point.
It’s just that it looks like a voltage issue.
It is a variable voltage signal, AFAIK?
If not a capacitor, maybe a resistor?

The supply voltages to this kind of circuitry are all low voltage DC. Only the output of the actual hall sensor is variable voltage. That is probably packed with it’s ADC in the same IC package, so impossible to debug anyway (unless you have a well equipped hardware lab and are up for some serious work).

There’s lot’s of things this could be, from some obscure hardware issue to a bug in the firmware. Debugging that PCB is going to be a pain, though. If VKB offers to RMA this, i would spare myself the trouble.

It looks like a perfect hysteresis, though. Is there a way to calibrate the stick/ADC? Could the calibration be out of whack?

It seems to me that the calibration is pretty good. I did go through the process a few times and it seemed solid. I will likely pull appart the base this evening and check things over. Then, install the latest software (I am off by a couple weeks) just in case that fixes something. VKB did offer the other person a replacement sensor board, and I would be happy with that.

My concern, because I always seem to do an inadvertent worse-case analysis, is that I have to get myself a new base. That gets compounded with being unable to purchase a new base 1) because of supply issues with VKB; 2) because they don’t sell the base without a stick; 3) because the new bases have the pins reversed which makes my existing VKB sticks (modified Thrustmaster Warthog and Kosmosima grips useless). I am not liking the worse-case analysis.

Another thing that springs to mind is the magnetic polarity… I had an issue with this when using TLE sensors. Could be the magnet has attracted some metal.

When I got home from work today I disassembled the base to see if there was anything glaring. Nothing stood out, that I could see.

Y Axis sensor board in place (it is also the common connection point for the stick (2 pin red, yellow, black), the X Axis board (bottom connector) and the outgoing connector to the VKB ‘black box’: 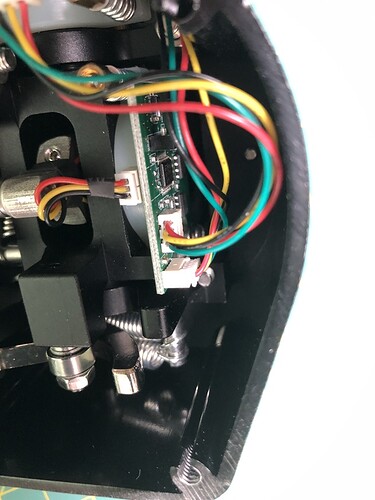 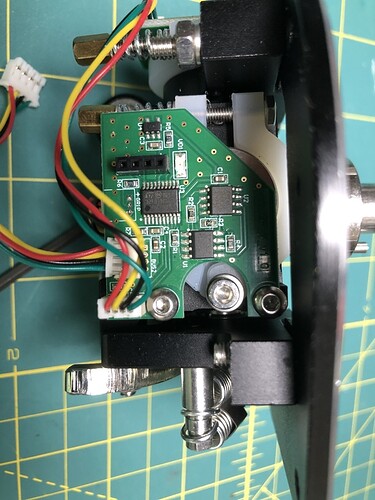 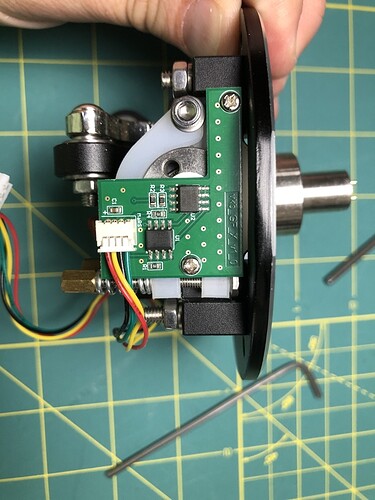 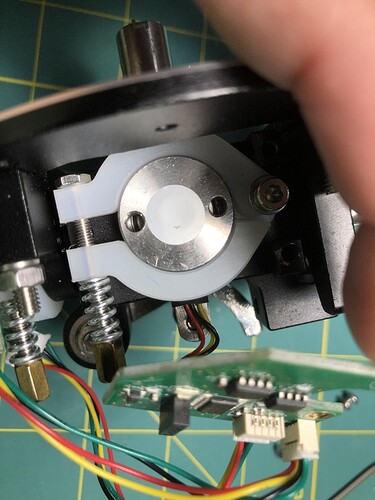 Bottom of the Y Axis board: 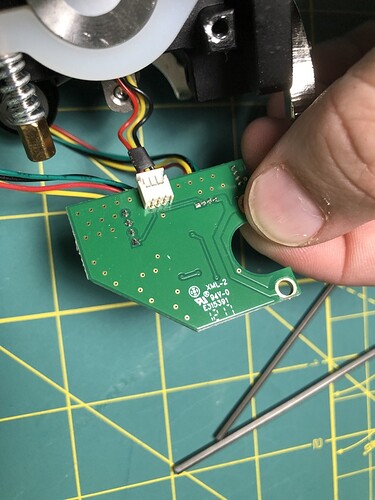 There was some small dirt fragments in the Y Axis mechanism and the appeared to be magnetic (resisted a light breath). Cleaned it all up, re-seated all the cables and reassembled the base.

Clean booted my machine and immediately went through the calibration sequence. Everything looked good: 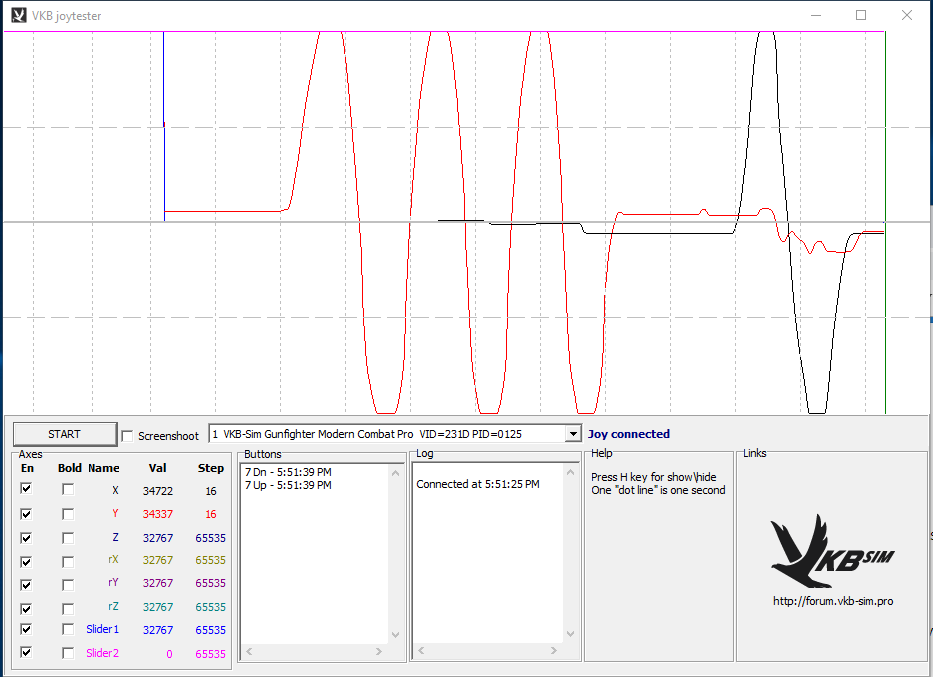 That is full throw of the stick forwards and back again with the X Axis at the end (side-to-side). Held the stick a little left and a little back. The next graph, time is along the bottom but if you see the vertical line on the right, that is where it is overwriting the previous path. So to the right of that line was me holding it in position (red is the Y Axis back a little and grey is the X Axis off to the left a little). When the graph hit the right edge it starts over on the left side and I started moving the Y Axis back and forth across the center. The forward motion was good but as I came back you can see where it ‘froze’ very close to where the stick was when it was being held. Then, suddenly it continued to the bottom and forward again, ‘freezing’ about half way. Through this process I was smoothly going back and forth and during the pauses, the stick was moving but the sensor was not registering. 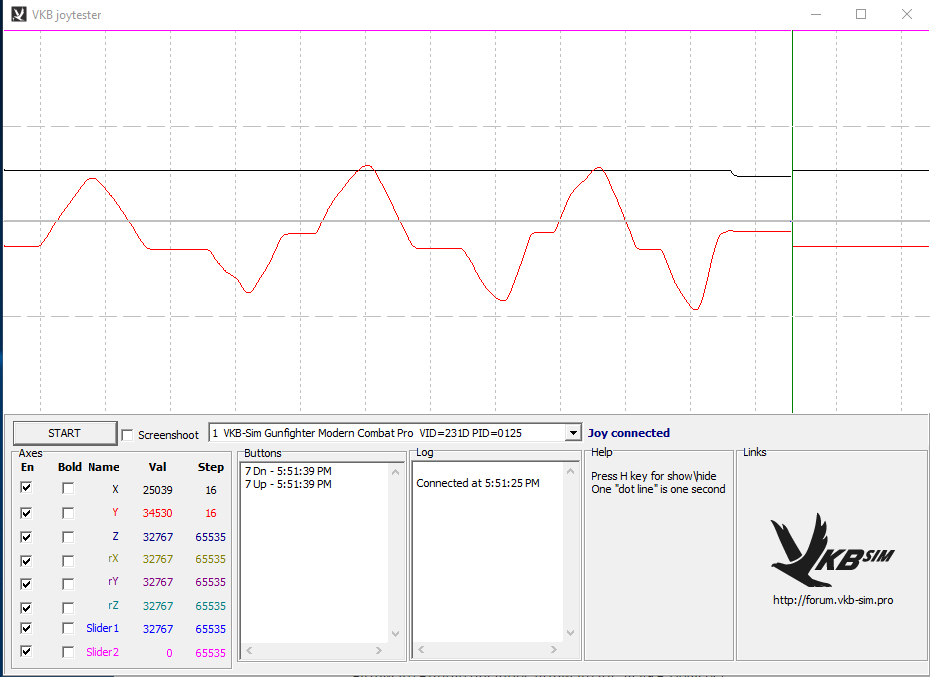 Ooookay!
Those sensor boards are totally different beasts than what they used before.

The signal looks almost like the magnet gets stuck.
Is the magnet completely secured?
Try loosening the friction damper…

So what happened between the good graph and the bad one?

Between the good graph and the bad one, I held the stick left and back a bit for a few seconds (maybe 10?). Then, keeping the stick held slightly left, moved it back and forwards. If the stick is ‘centered’ or held far left, this isn’t an issue apparently.

I will take a look at the mechanism again later today. Nothing seems loose but I did not pick at it all that much

So it may be worse than I was hoping. Here is what I posted on their tech site forums:

So, at the suggestion of one of my friends on the Mudspike forums, I disassembled the base again to look for looseness in the Y Axis magnets. I marked one side of the bearing and noticed some slack in the Y Axis movement that would not turn the bearing.

Here is the Axis straight (note the two little black marks on the bearing): 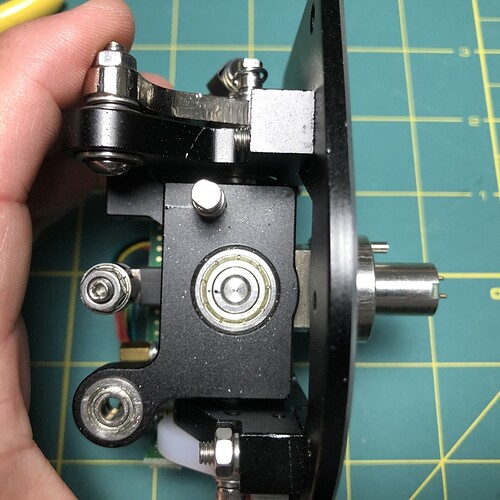 And then I moved the Y Axis a little without the bearing moving: 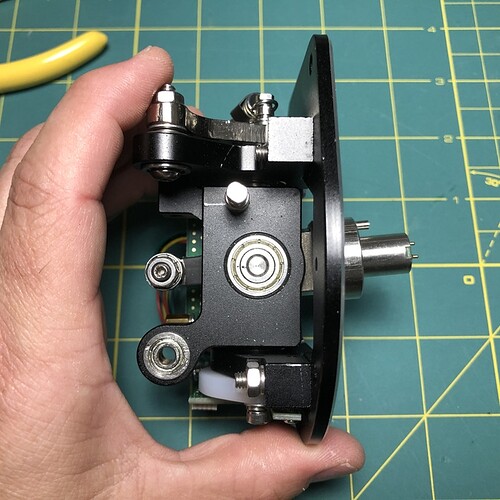 I disassembled the base a little further to get to the sensor section, marked the metal and plastic clutch (which is not tight enough to generate this). 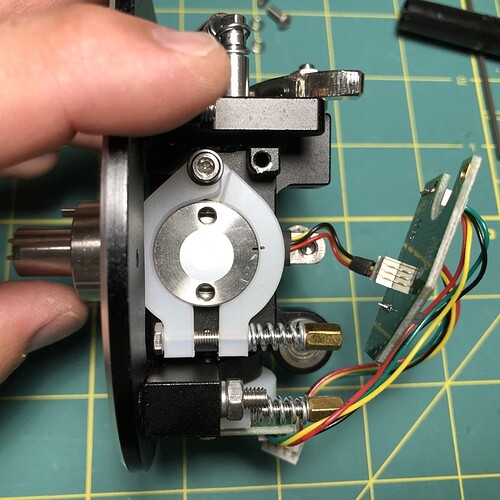 And then I moved the Y Axis a little without the two marks separating: 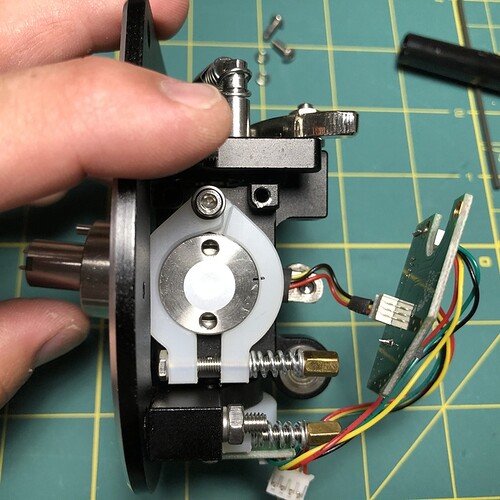 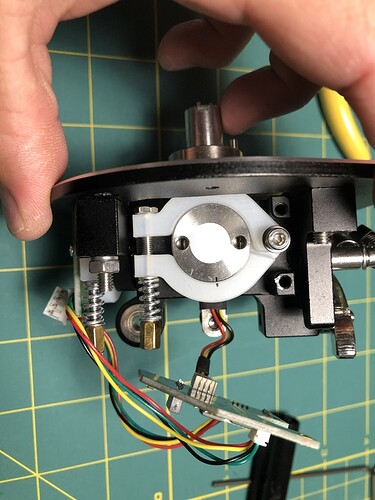 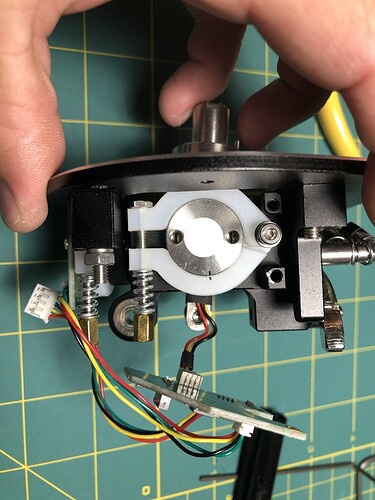 Playing around with this with two hands, in this disassembled state without the springs or cam (?) in place, there is considerable play in the Y Axis and a small amount of play in the X Axis.

I was able to replicate what I think I am seeing in the Tester graphs with the Y Axis disassembled. If I move the X Axis a little to the left, and there move the Y Axis back and forth, there is a little ‘slop’ in the movement of the bearing/magnet that seems to correspond, by feel, to what the graph is showing.

In my case, this seems like a more costly fix than I had hoped (with a sensor board replacement).

Also of note, the ‘10’ cam that I had in place has a two grooves in it. One, travels along the axis. This is where I observed the bearing riding along the axis. This groove does not affect functionality but shoes some wear on the cam. The second one is harder to see but if you come down along the axis from the right (in the picture), you can see it get shiny and then abruptly get dark just after the yellow line in the background. There is a small groove that runs top to bottom where the ‘center’ of the axis would be. It is hard to see but you can feel it when moving the stick. I think that the looseness is causing the cam to grind back and forth along this position. 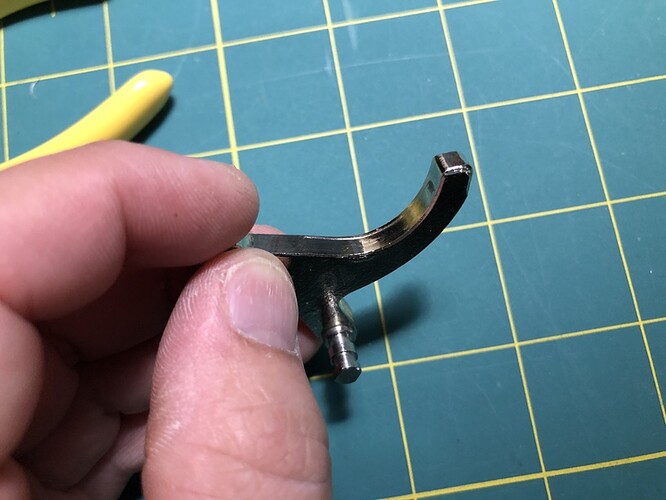 I really like the mechanism that VKB has but it is pretty apparent to me that it has become looser over time. The Y Axis has some fairly significant play in it now when you have the springs and cam off and it is loose enough to notice right away once you have those pieces free. This was not there the last time I changed the springs; granted, that was likely almost a year ago.

I am not sure that there is a fix other then replacing most of the base - as it does not seem to be to be trivial to do without tearing down the base to it’s component pieces.

Ouch…!
Well, at least you know what the problem is.

Yup. I am just not really liking the solution

I like the VKB stuff. I really do but I am not sure when they are going to get stock in again.