Just when I thought I was out

Horizon Hobby pulls me back in:

I mean, come on, how am I supposed to not buy a mini V-22 that I can fly in my back yard and can be transported in the box it came in? 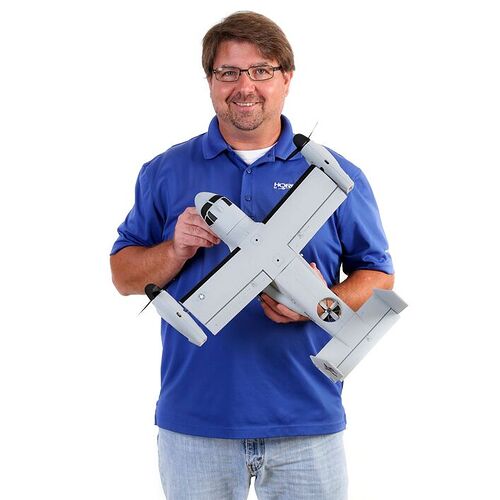 Yes, there is a bit of a ‘cheat’ with the third fan on the back, but the only other alternative would be to have a full blown cyclic rotor system in the pods, and that would be way too expensive and impractical.

In fact, there has been an Osprey on the market (or at least was) that’s built that way, has about a 30” IIRC, and cost ~$2k, as it’s basically two 500 scale RC heli kits bolted together with a trick flight controller to keep it all in sync. To get a scale body for it, it’s about another $500.

This one costs 10% of that, so I’d say it’s compromises are justified.

Horizon has definitely been coming out with some cool backyard flyers as of late. Just a shame the hobby in general seems to be not as well enjoyed by kids as it once was. I blame the Xbox…

Just a shame the hobby in general seems to be not as well enjoyed by kids as it once was.

Well when the mass media, the public at large, and the FAA are constantly harping about “muh drones” is it any real surprise that folks are shying away from it?

I agree that the media does not portray the hobby in a positive light and they are not going to take the time to understand the difference between models that require line of site flying and those that are FPV based.

I dont blame the kids for gravitating towards xbox. I think a major factor here is cost; a decent parkish scale model (40in wing span or there abouts) can cost $200, and then you need a radio (~$100ish or more for a decent entry level).

Then many folks dont have back yard large enough to fly these, so someone has to drive them somewhere to fly.

Plus theres the learning curve, which can be costly. A sim is ideal to start, but again thats another $150. Wrecked planes cost money to rebuild.

Its all just too expensive and inaccessible for the youths.

Yeah, til the older guys tell you that you’ll never fly RC 'cause you’re deaf and crash your plane.

I only briefly dabbled in RC late in life. Aerobatics put an end to it. But loads of my friends are into it and the hobby seems very active to me. In fact, every hobby I participate in that is populated by middle-aged men has the same “what happened to x, the kids just aren’t interested anymore” vibe. RCers I know have been unique in not having that complaint. It seems that that the hobby is alive and well with loads of new participants. I can’t imagine dealing with the expense, size, noise and grime of being an RC enthusiast in the '80’s. Today we have cheap throw-away park flyers with all the servos and gyros on a single chip the size of a Frito. The appearance of a low or dwindling population is more likely that most participants can now fly well away from an established RC field. I was a helo guy and was told in no uncertain terms not to even get out of my car if I insisted on bringing my T-Rex. So as far as I am concerned the death of RC fields filled with old men driving planks couldn’t come soon enough. But that’s just me and my long memory. The hobby is rocking. Just not in the same way it rocked 30 years ago.

When I was a kid (late 90s/early 2000s) I couldnt afford it, as a typical plane was about $500 to get flying, so I went with rc cars instead. I also was pretty active in model rocketry, which is way cheaper than RC.

The result was electric planes finally being a viable alternative to gas/nitro, as they now the power:weight ratio and flight duration needed for aircraft more advanced then trainers. An added bonus, this empowerer manus to make smaller aircraft, where previously nitro engines would have been too large to be viable, and use foam thats quick to manufactor in molds, vs balsa ARF/RTF models.

This has also meant building is more an optional part of the hobby, so those who dont have time to build still have access to really cool models to fly. Theres of course lots of hand wringing about how “the kids these days dont get it!” while of course casually overlooking how much advancement this has meant for the hobby.

I started in RC during the 80’s. Building it yourself, was pretty much the only way to do it, back then. I learned to love the building process and it increased the fear factor of flying as a crash meant weeks or months of repair work.
I got quite good at repairing crashed airplanes and earned a reputation as the repair kid. I started repairing and building, for others, earning both money and used gear, as payment.
Sold everything to afford a computer, and it’s been downhill ever since

Not quite. I got back into the RC hobby when electric flight became a viable solution, in the early years of the new millennium.
Still love to build! Kits are really advanced compared to the sticks and straws I started with. You can buy balsa kits that’s been constructed with CAD software and produced with CNC equipment. Parts litterally lock together. You actually put parts together and then drop CA glue in the joints. Perfect results, every time! New times. New technology.
These guys caught my attention, recently.
https://3dlabprint.com/
I really need that 3D printer…

Crap! The order form doesn’t work with an iPhone. If I don’t get it now I’ll loose interest.

I’m interested, but only if I can fly it FPV. I have reasonable LOS chops, but once I started fly FPV, I was spoiled. I see that they have it FPV ready with a camera and transmitter SKU, although I’d rather roll my own. The sticky part for me is that I don’t run Spektrum radios anymore. I do have an old Walkera 8 channel that’s running deviation software that connects to older Spektrum gear (DSM2/DSMX). It has one 3 way switch, so it might work. Will watch for some reviews.

I think I’ve fulminated at length about the horrendously restrictive drone laws in Texas. Essentially, unless you’re a real estate agent or a police officer, don’t bother with them. I’ve got a DJI P4 that almost never comes out of the box because I live next to a Corps of Engineers lake. You think you have disgruntled neighbors that complain about everything?

The entire RPV hobby gets painted with the same brush. I had a friend who was doing a fly-in at a golf course in Dallas and the neighboring McMansion residents literally stomped out on to the greens and demanded to know if any of the $50K scale aircraft had cameras on them, and if they did, the police were going to get involved. Result? Everyone literally packed up from a nice day of flying and went home.

The laws over here are a bit different.
Camera drones are treated more or less as a camera. You can take pictures of anyone, but not inside their homes.
But you are not allowed to publish pictures or videos showing people that can be identified, without their consent.
Exceptions exist, of course. Military and other classified installations must not be foto’d. But, again, that’s the same as for any other camera.

Same thing for me too. My P3 really doesn’t leave the box. Occasionally I fly it on my property, but that’s about it. A complete waste of money really, which is a shame because 99.9% of the time, drones are no problem at all.

I just ordered. They, the PNP and BNF versions, are both in stock now. For those who want FPV, the Osprey is set up to accept the Spektrum camera.

Yup, hobbyzone shipped my Osprey yesterday. As of last night horizonhobby.com still had BNF in stock, although its telling that pnp sold out.

Figures, both the osprey and the umx timber I ordered are due Monday, AFTER the excellent weather the mid atlantic is due to get this weekend

Really interested in hearing your reports of flying it. My UMX PT-17 is sitting in the closet with only a handful of flights after a couple of years. RC just doesn’t seem to be my thing anymore.

How is the tilt rotor controlled on the Osprey? Via something on channels 5+?