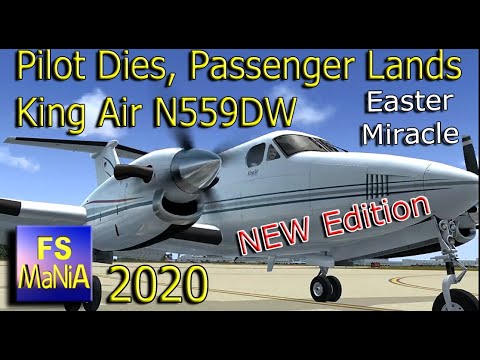 I just ran across this video from a situation in 2009. Quick synopsis: the King Air 200 pilot becomes incapacitated (ultimately dies). There was a family of 4 onboard. The father has his private pilot certificate, but hasn’t flown in nearly 20 years (except for I believe 1 or 2 recent flights).
Set aside 45 minutes if you want to take it all in. Full ATC comms with subtitles. Major kudos to ATC for handling this situation so well. And the pax/pilot for taking over…

He took it a lot better than I did during my first couple of King Air 350 sim lessons.

I just came from the E175 which is AUTO everything and I was like, wtf are all these levers and switches? 90+ aircraft limitations and memory items to memorize? Wait, I have to hand fly this thing? C’mon!

That’s a pretty good video.
I listened to it some time ago.

I think situations like this will become less and less common, not that they’re very common as it is, but as planes become more and more automated, it’ll probably come to the point where just about anybody will be able to be talked through pressing a few buttons and have the plane land itself.

SRAL, or Safe Return Auto Land systems already exist for some light general aviation aircraft. Another system that can be used by passengers is the BRS, or Ballistic Recovery System that deploys a parachute for the entire aircraft. Now, I wouldn’t trust either system over a qualified pilot, but if that pilot is out of the equation, sure.

Now, I wouldn’t trust either system over a qualified pilot, but if that pilot is out of the equation, sure.

Either system will probably do the job fine 99.9% of the time, it’s that 0.1% that you still need a pilot up front. Modern aircraft already abstract away so much information from the pilots anyway and thus take away a lot of decisions that is done by computers anyway. Though let’s be real, if these systems exist and an emergency would incapacitate both pilots then a dispatcher would be able to recall the aircraft, I highly doubt that if that tech came to exist in an airliner that it then it would require any physical on-site inputs.

Besides, costs of maintaining and certifying such systems is prohibitively expensive for most operations so I don’t see it becoming that widespread soon unless there is a strong regulatory push, but even that usually takes years unless there is a significant loss of life at one point or another.

It is interesting to study military drone losses, in this regard. They are designed with a higher level of automation. Now, it’s important to bear in mind that these aircraft are not designed to carry passengers and are not subjected to the same safety requirements as an airliner. Nevertheless, the accident rate of unmanned aircraft is in a league of it’s own. It is hard to maintain situational awareness when the system witholds vital information. It’s even harder doing it off site. These are rather big obstacles that must be overcome, before remotely piloted airliners can be considered. Technology will get there, eventually. But not today