Laptop Capable of DCS and VR

Is anyone aware of a laptop sufficiently powerful enough to handle one player HP Reverb G2 based VR in DCS? I’m interested in a portable training tool.
Thanks,
Bill

To get good performance, that is a really tall order. It might exist but will be many times more expensive than a desktop.

If it only needs to be portable and won’t actually sit on your lap: Have you considered a small desktop box, mini-ITX size?
Much easier to get a properly cooled RTX 3080 in a square little box with holes than in a flat laptop.

I’ll give that a try but then I still have to haul around a monitor… It would be much easier to just flip open a laptop and use a USB hub expander to deal with all the acc.

It’s too bad there’s not (so far) a way to immediately launch into VR on boot-up. Maybe a batch file that launches everything once windows starts up?

I have a 3-year old Eluktronics laptop that has an i7-8750, RTX2070 and 16GB ram. I’ve run it for years with my Rift-S pretty successfully (struggled a bit with HL:Alyx, for example), but haven’t even tried it with the Reverb; I don’t think it has the horsepower.

If you’re looking for portability, I’d second the idea of a smaller form factor desktop. Before my laptop, I build a ‘briefcase PC’ for going on the road, which worked pretty well. Based on a case like this:

Based on the excellent RAVEN Z RVZ02 chassis, the Milo ML08 is a super slim Mini-ITX console case with highly capable accommodations. With a volume of only 12 liters, this case is small yet easy to assemble when compared...

I chose that case because I needed it to fit a maximum thickness, couldn’t fit a more square shape in the nook on the bird that I had in mind. It rode around behind my cockpit seat for about a year (I’ve heard transistors and capacitors don’t necessarily like FL450 unpressurized day-in and day-out), I’d have a KB/Mouse in my baggage and hook up to hotel TV’s. Eventually got tired of the weight and switched to the laptop, and it became my desktop at home. I just know that for VR you need top-end performance, and you can get that for a lot less money (and better cooling) in a desktop form factor. Good luck either way, let us know what you end up going with.

I guess to be helpful, I’d say consider the Alienware brand. Somebody else might come along and crucify me with a cheaper alternative, but the one my brother has seems to be very solidly designed and built.

iirc some models from them can be equipped with liquid cooling.

that can boost the performance a bit. because I guess that air cooled laptop even fitted with 3080 card will struggle to deliver satisfying performance. Something like this would get you way better performance in DCS VR than any current gaming laptop could give you:

If you are interested, I can do some more research because I am not 100% sure which RTX3080s will fit in that case with NF-A12x15s underneath, without having to remove the video card shroud. Over at reddit.com/r/sffpc there are plenty of experts willing to help though.

disclaimer : Eluktronics (mentioned above) is US brand of XMG Some Digital Image Tech people I know used to build Beefed up PCs on Pelican cases for on set use (maily to use RED Camera dedicated cards). I saw a couple that had monitors attached to the lids and some custom vents drilled in. No longer waterproof and definitely not super light but they did the job.

I attempted to do exactly that out of a Halliburton briefcase and a large pelican case, it ended up being too small in a few dimensions and I found a purpose built case was ultimately more efficient.

I should have stopped to think about the cooling. You can have all the capability in the world but it will be useless if your cooling does not permit you to use it :(. It will have to be a desktop.

Thank you all for the thoughtful replies.

There are a lot of things you can do to optimize portability for a mobile desktop setup, like a wireless keyboard/touchpad combo, Mount the monitor to the back of the case, zip tie cable management, things like that. Especially when considering you probably have to move and set up a HOTAS and rudder pedals as well.

My laptop manages it. I have moved on to a desktop but the laptop was intended from build to run dcs on a Reverb G2. Made by Chillblast in Poole UK.

I am currently running DCS using the following setup with acceptable results, but I will be building a desktop with a 3090 when the prices drop to a reasonable level.
Lenovo Legion 5 Pro laptop with an Intel Core i7 10700 processor, 2.9GHz, turbo to 4.8GHz
32 GB Gskills Ripjaws DDR4 3200 RAM, slightly overclocked using MSI Afterburner (core clock set to curve, memory clock to 0).
Graphics card is an NVIDIA GTX1660ti.
Oculus Quest 2 VR headset
High speed cable internet, measured at 136GB down and 14GB up.
5G WIFI router hardwired to network switch about five feet from my head, dedicated to the headset alone.
Virtual Desktop wireless connection to headset.
Tip - Do not allow Steam VR or Oculus to run. Start headset, start Virtual Desktop streamer, start Virtual desktop on the headset, click the up arrow to show desktop hidden icons on your taskbar. Right click the green Virtual desktop icon and choose start program, browse to the DCS program folder and choose DCS.exe click OK. This bypasses Steam VR and Oculus which really slow down the graphics card.

This bypasses Steam VR and Oculus which really slow down the graphics card.

Oooh, you have my attention…
Does this means I can use an HP Reverb without Steam VR?
Would that help performance?

I wanted to avoid Steam as I prefer not to put a sales channel in the middle of my working environment.

Open XR worked for me straight away allowing the use of the Reverb G2s without Steam. Of course, I still have WMR running and trying to sell me stuff on a regular basis (not to mention DCS itself but then I want to hear about their offerings).

I am not sure about the Reverb, but it works with the Quest 2. You must have the stand alone DCS, not the Steam version. I picked up 15 fps with the in game settings on the VR preset and Steam and Oculus programs off. It also eliminated the stuttering, dropped frames and locking up on approach to busy airfields. At the end of the day, it is a laptop with a mid grade card and low cost VR headset, so things are a bit fuzzy at distance and edges have some aliasing issues. You can see them on the attached screen shot, but I fly way better in VR than 2D, so I live with the limitations until I can build a desktop with a 3090. 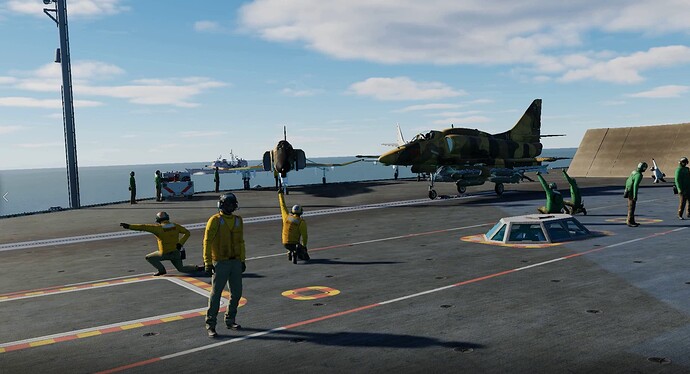