Growing up in the Ohio valley I saw this and it just impressed me.
It was called ‘strip mining’ and just raped the land. But back then, it was called progress.

I’ll see your Ohio excavators and raise you a German monstrosity: 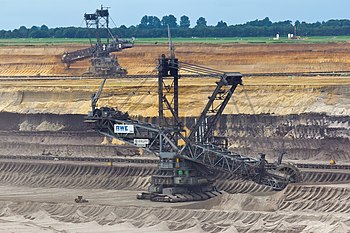 Bagger 288 (Excavator 288), built by the German company Krupp for the energy and mining firm Rheinbraun, is a bucket-wheel excavator or mobile strip mining machine. When its construction was completed in 1978, Bagger 288 superseded Big Muskie as the heaviest land vehicle in the world, at 13,500 tons. It took five years to design and manufacture, and five years to assemble with total cost reaching $100 million. In 1995, it was itself superseded by the slightly heavier Bagger 293 (14,200 tons). N...