Our kids are too young for mobile phones, but they are beginning to stretch their legs around the neighborhood enough that my wife and I have begun letting them take family band radios in the basket on their bikes. So far it has worked pretty well, but since there are five of us and only 3 radios, I need to pick up a few more. I prefer Motorola, based on watching my dad carry one in the Air Force on alert, and then as a commander. He would fall asleep in his easy chair and his radio sounding, “TAC operator, paging Col. Blake.” Those radios seemed indestructible.

My experience using them cycling and skiing has been pretty positive as well. Current inventory is one 18 year old orange baby Motorola T5410, and two yellow much newer models, MS350R, which are waterproof and have weather band. The orange one is only good line of sight to about a 1/3 of a mile, the yellow ones much further (advertised 35 miles HA!). Compared to aviation or marine radios, they suck, but I guess that the point.

Does anyone have a suggestion for adding a two to three more (they often come in packs)? Or something better. Counting the seconds until @BeachAV8R responds, as he seems to love outdoor gadgets

On the other hand, I can imagine that you military, law enforcement, EMTs, and other professionals who use good radios are probably getting a chuckle out of this. Yes they are slightly better than two cans and twine. FYI, I have an Icom handheld in my flight bag

I bought these for our aerobatic contest last year. They worked well enough to connect me (contest director) with the judge’s line and the boundaries (2 miles away). They claim a much farther range but during testing I was not able to achieve more than the 2 miles. They worked well for our purposes and cheap enough to buy a bunch. Battery life was decent. But I agree that @BeachAV8R probably has a more “outdoorsy” reference. I researched these fairly deeply last year. I needed something cheap because I had to buy over a dozen. In the cheap radio market, Midland is a good brand.

Not sure if getting a ham license is an option, but if so, baofeng handhelds are very inexpensive and you can use local repeaters to boost their range. Without a repeater they are pretty much line of sight but are probably better than GMRS. The ham test is pretty easy now that you don’t have memorize morse code. There are no age limits afaik and there are some pretty young hams out there. Ham radio is a hobby unto itself though.

They claim a much farther range but during testing I was not able to achieve more than the 2 miles. They worked well for our purposes and cheap enough to buy a bunch.

I’ve had a couple pairs of GMRS radios and I’ve never had any of them reach the range they advertise. It doesn’t help that most of the time I’ve been using them has been in places like Great Smoky Mountains National Park where line of sight is usually about 50 yards before a major ridgeline is intersecting communications. We have used them to good effect on our kayaks though…when one person wants to paddle at one pace and the other at another pace, but we generally don’t get more than a couple hundred yards apart. I also like to use them when my Dad and I are fly fishing to keep track of each other and alert one another of how awesome we are doing…

The best I had were the old Motorola 8500R radios my wife and I have used over the years. 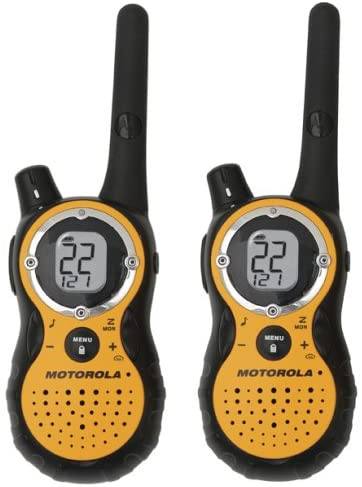