So, my CH Throttle was getting a little ‘twitchy’. Replaced the potentiometer (shipping was more than the ‘pot’ so I got an extra one). Better, but still not smooth [enough]. Unit is, hmmm, 15+ years old now. And it’s not even 8-bit’s precision – probably why it’ll always be a little less precise. Still quite usable though.

So, what’s out there in the higher end for throttles?

Thrustmaster: Seems I’ll have to immediately spend another $50+ to get a TDC that really works. Other than that, any long-term issues?

Virpil: I could grow old[er] waiting for these to come in stock, and then get ‘lucky’. So far reviews, what few there are, are good.

WinWing: Only want the throttle. Doesn’t appear to be an option yet.

Any thoughts, ideas, or opinions? Did I miss any quality ones? That have oodles of buttons/knobs/levers? And will serve me as long as my trusty CH has?

I think you’ve pretty much exhausted the list of mid to high-end ones, unless you throw in the Logitech/Saitek X56 (which isn’t sold separately). I have the CH setup as well and it’s hard to justify upgrading to the others, even with the various problems. Truth be told, I’ve considered some of the upgrades/mods to my CH gear rather than throw a bunch of money at the stuff offered by TM, Virpil, VKB, WinWing, etc.

I’ll add that for the throttle, make sure the wires that connect to the pot are tight. The stuttering input often comes from the connectors not being as tight as they should be, causing them to shimmer when you move the throttle.

Thanks for that. The Pot replacement helped a lot. The throttle shimmy is when I’m not touching it, looking down in the pit I can see it [the virtual throttle] ‘twitching’, after the new pot only a very tiny bit, when hands off.

Can you put Hal sensors in there instead? I’ll have to search for modding the CH…

Someone was working on an upgrade kit, but it basically replaces the entirety of the insides with new buttons, sensors, etc. so it’s basically a complete refresh of the stick and throttle:

No joy. Saw info about using a ‘powered’ USB port (I thought they all had at least some power?); changed ports, no joy. Played with the Gain curves, deadzone, and sensitivity. Again, no joy. It’s better than it has been (with the new pots). Was just hoping to get that last teeny bit of jiggle out of there. Moving on…

Best option is to clean out the pot with contact cleaner or replace the pot.

If anything you could use USB 3.0+ ports as they can provide more power - old USB was ~0.5 amps and USB 3 got that up to ~0.9 amps. However, if it does draw extra power then you may have issues in the wiring. If it fails to power, it could be a bad motherboard port or even a weak power supply - but you’d likely see issues across USB port sets in that case.

Did you get the original pots? The resistance value has a significant influence on noise output.

Can you put Hal sensors in there instead?

I have got some hall sensors and ring magnets if you want to try. The hall sensors are connected in the same way as the pot…
Put the ringmagnet on the rotating axis and mount the hall sensor so that it’s poking inside the hole of the magnet.
It’s a fun DIY project. 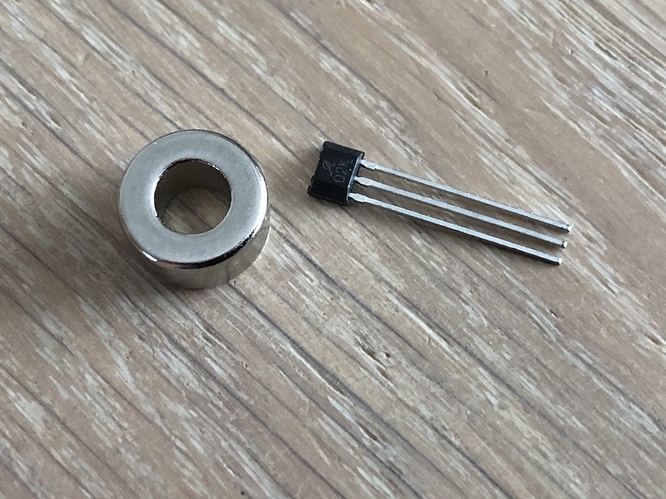 Still working it. Have an option for HAL sensor replacement. Next I’m doing some script coding (via Control Manager). Outside of DCS it seems to help. Still fussing with it…

Ok, seems the CMS scripting is doing the trick; my lever is not twitching anymore. Wasn’t very bad but, well, you know how it goes.

Note to self: nixed the script idea. It works but introduces some latency. Didn’t think it would be enough to notice but it kinda is. Next trick: powered (real powered) USB hub. There are those that say this is the only real solution; I could use more slots anyway. If any CH ppl are following I’ll report back when it’s delivered.

Sorry to say that this won’t help, as I have a powered USB hub and I still have the jitters.

Oh well, I hit the “Buy now with one-click” button already. And I rationalized it by needing more USB ports anyway

Last step would be the HAL mode. Emailed the dude who makes these. Not too expensive.

I had to do that last fall because my new motherboard didn’t have the ports needed. So as long as it’s a decent powered one, you’ll be fine. (Insert @Wes raging against daisy chaining USB here.)

Will now and forever always, hate USB hubs after it being the root cause of death on some flights when the stick got ignored momentarily or the rudder pedals (brakes).

When I ran out of ports with the extra MFD’s I bought a “hub” that connects directly to the motherboard’s extra USB header, and then takes a PCIE rear slot (not a PCIE port, mind you). Zero issues, and I stand by my method.

USB extension cable? Sure. I electrical tape the connection so it can’t get loose.