Campaign
I’m running the “Black Sea” campaign, inverted so I fight from Sochi down to Batumi. I’m using custom factions modded from the existing factions with limited units that roughly represent 1968, or as close as I can get to it. One Buff squadron and one Phantom squadron at Maykop, two Marine Scooter squadrons, and Tiger and Huey squadrons at Sochi, with Navy Scooters on the carrier off the coast to the north. 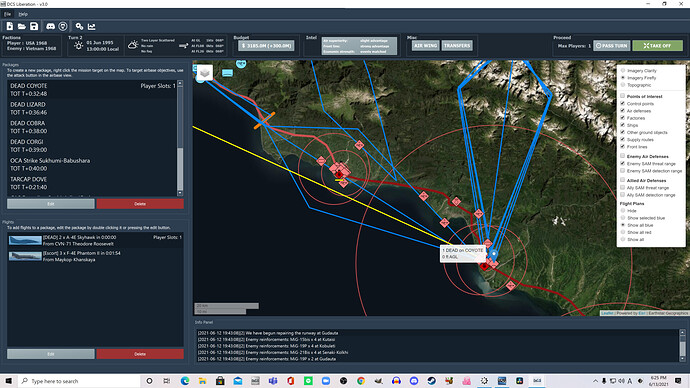 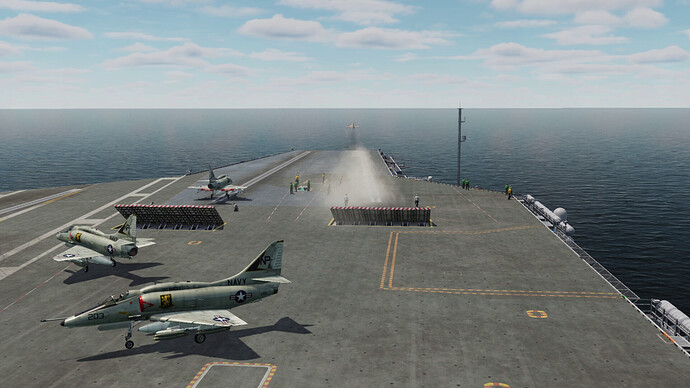 Making the 170nm journey to the target. 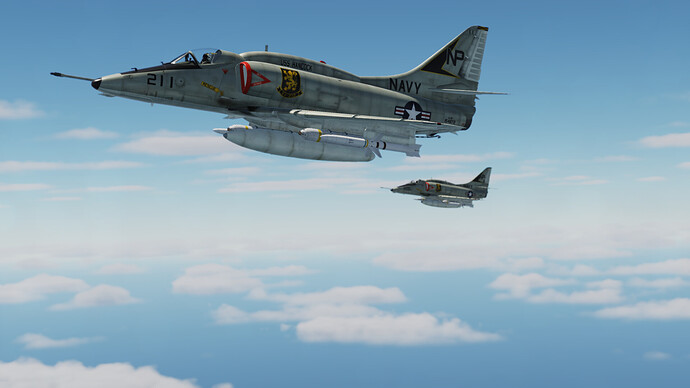 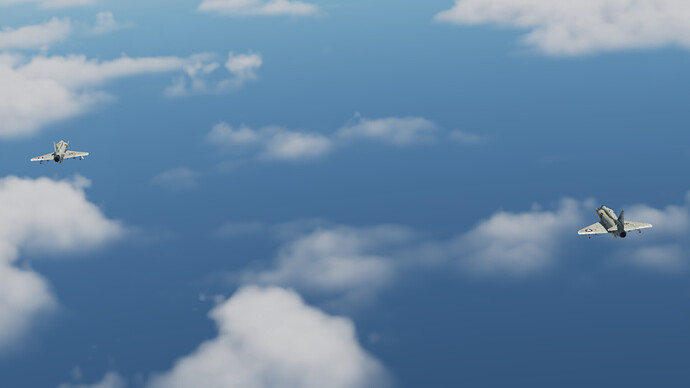 We ingressed at 200ft over the water, one mile trail. I popped up to bait the SA-2 into firing. It never did. Unbeknown to me, it had depleted its missiles already. On what I don’t know, because I arrived on time and had no other packages fragged for that area prior to my TOT.

First Shrike launch at +0:32:40. Well within 10nm but still landed short of the target. 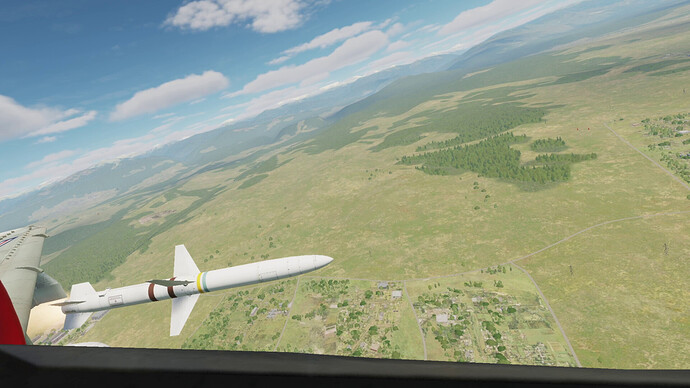 I repositioned for a shot from the north while my AI wingman, in his infinite wisdom, beelined 200ft over ADA and unsurprisingly got shot up. 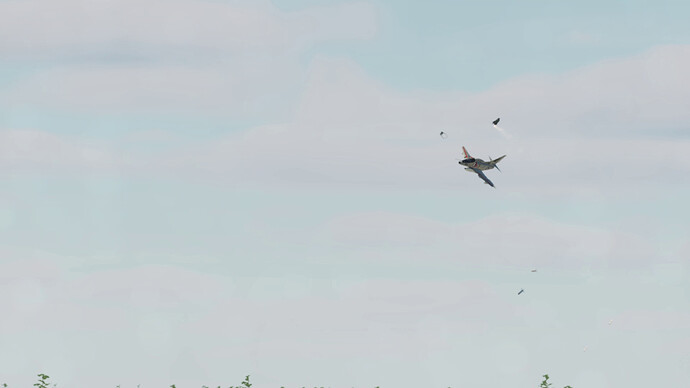 Took another Shrike shot from the north. Another miss. 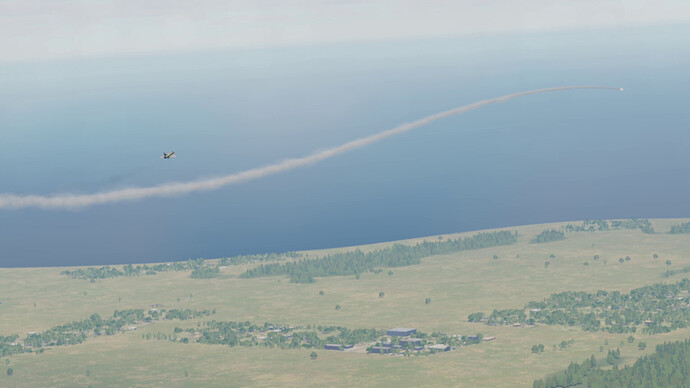 I made a few passes with Rockeyes, but still couldn’t hit anything. First one landed 100m short, the second one landed about 20m off. So I spiraled down to strafe the track radar from the east, hoping the treeline to the west would protect me from the ADA just on the other side. I came in low. 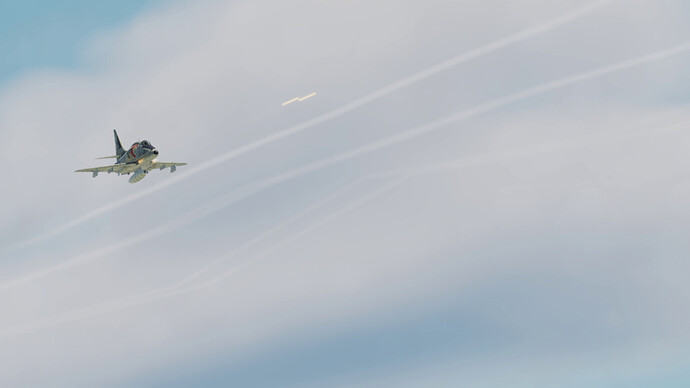 As I spiraled down, I saw a MiG-21, high two miles southwest of the target area, probably commited on me. I came off the target hard left at tree top level and spotted him on my lift vector, maybe one mile, following the flightpath I just made while strafing. I extended east so I could egress north without getting shot up by ADA. Breaking left towards my egress I find myself being chased by two MiGs. No idea where the second bugger came from. 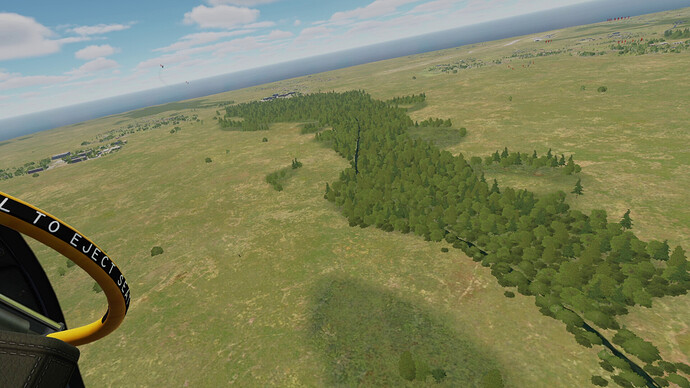 I did a roll reversal, forcing one MiG to overshoot just enough to go abeam of me. I zig-zagged my way above the trees while popping flares until the two MiGs decided to leave me alone and go after juicier targets. At one point during egress I looked to my right 3 and watched a MiG take down a friendly. 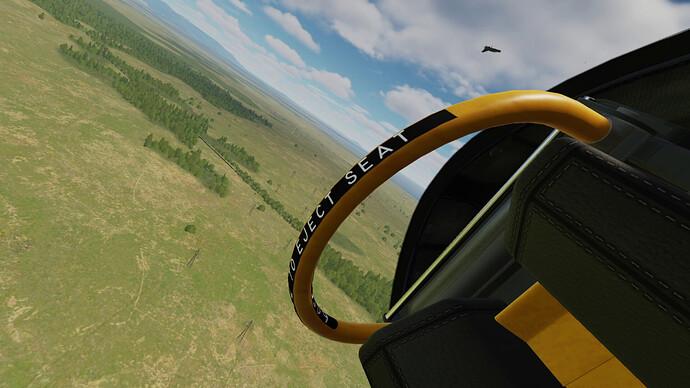 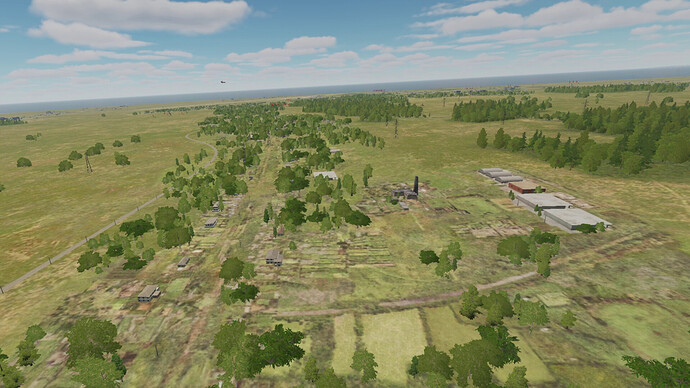 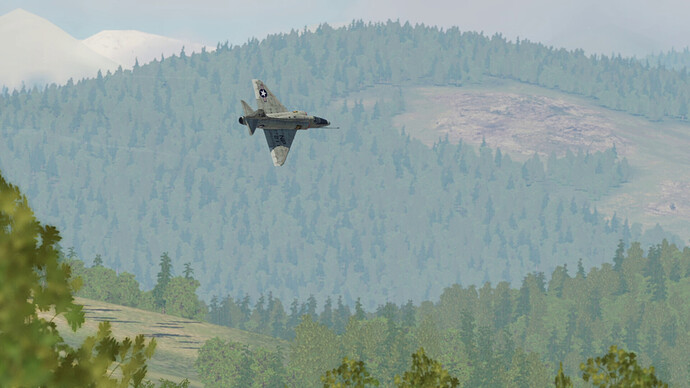 170nm back to the Boat. Got stuck in Marshal puratory for a bit before getting another 1-wire, TMDRAR. The Scooter does not like landing. 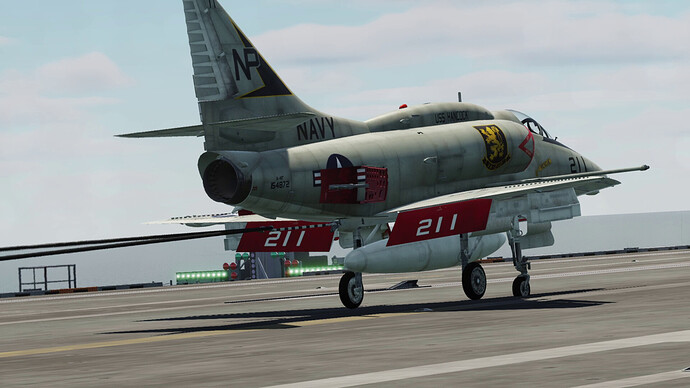 Gudauta and Sukhumi airfields have been knocked out at the expense of 9 Skyhawks, 3 Buffs, and a couple Phantoms and Tigers.

Awesome report and great screens…! The Scooter sure is a fun jet…

the expense of 9 Skyhawks, 3 Buffs, and a couple Phantoms and Tigers.

That’s quite the butcher’s bill you racked up there…

One Buff squadron and one Phantom squadron at Maykop, two Marine Scooter squadrons, and Tiger and Huey squadrons at Sochi, with Navy Scooters on the carrier off the coast to the north.

Is there an AI Phantom then or a mod? Would love to see that in some pics next time

Has anyone tried to add the F-105 mod to the mix? On the Liberation wiki it’s described as a challenging task … Rolling Thunder ahead?

That’s quite the butcher’s bill you racked up there…

I suspect AI shenanigans are afoot. I should run Tacview to see exactly what happens in these missions, but I and the rest of my Navy Scooters showed up on time. The AF boys in their Phantoms never showed. The F-5s that came in later were somehow completely outclassed by poorly-armed MiG-21s of a lower AI skill. Oddly enough, when I ran the server replay track for filming/screenshots, the Phantoms showed up on time and took out those MiG’s before they had a chance to engage me during my final pass on the target.

Is there an AI Phantom then or a mod? Would love to see that in some pics next time

Just the LOMAC-era F-4E. The thing looks awful but I’ve got a couple of USN and USAF liveries for it. Even a QF-4 livery for target practice.

Wowsa’s - I actually forgot those existed. They need to get the guy that updated the cows to take a look.

I’ve had to do significant tweaking to the AI for things to work. AI Skyhawks like to drop bombs in pairs, which ends up in them suiciding by ground fire. Giving them Mk81s on MERs and they more reasonably do one-pass attacks. Any skill lower than “excellent” also causes them to go in low and slow instead of high and fast. AI Phantoms also need to be at either “excellent” or “ace” to stand a chance against MiG-21s at “rookie” level. It’s kind of weird watching a 4on4 with MiG-21s, armed only with K-14s, completely obliterating Phantoms.

Round 3 was a bit of a non-event with some cleanup around Gudauta, as front-line forces move in to position to capture the base. Intel reports Sukhumi is sending T-55s and other vehicles to reinforce Gudauta, along the main road leading NW out of Sukhumi airfield. VMA-211 are tasked with interdicting this supply convoy.

Going in with a four-ship, Spread Four. Escorting Phantoms duked it out with some MiGs a few miles to our right 3 as we ingressed. (Excuse the watermark; a lot of my Instagram content gets stolen and reposted) 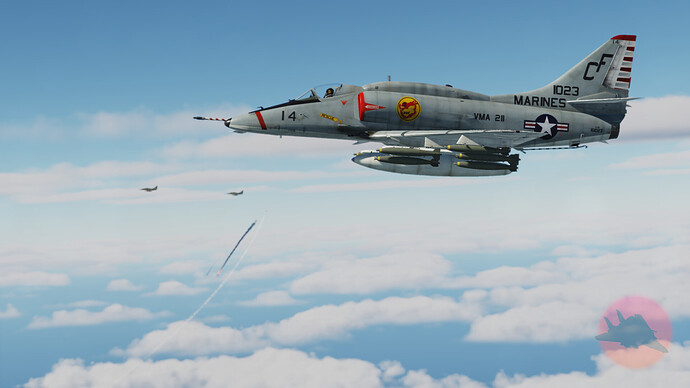 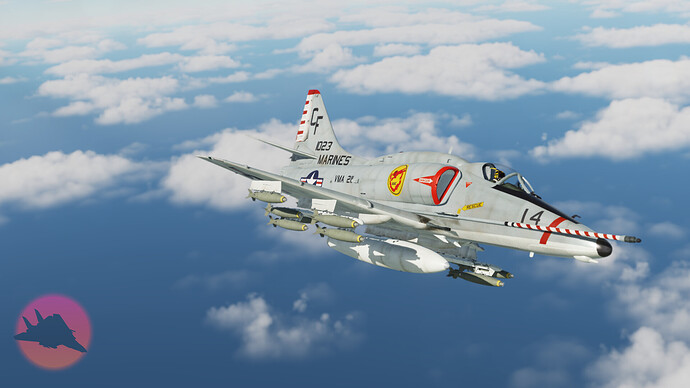 The tank column was spaced at about 100m intervals on the road, but I spotted something trying to hide in the treeline at the base of the column, forming an L shape. I rolled in to bomb whatever it was and left the tanks up to my AI wingmen. 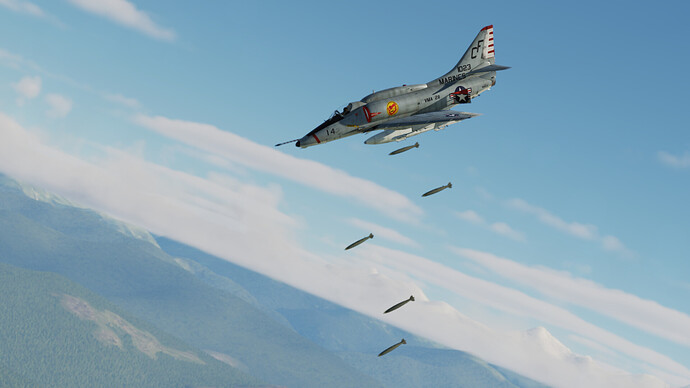 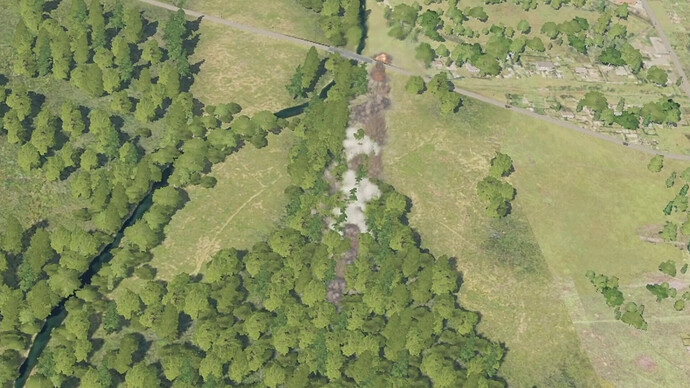 It turns out the treeline was full of S-60s and IFVs. I took out four of the S-60 guns with that pass. While the AI were making passes on the tanks, I strafed a BRDM and T-55 on the outskirts. 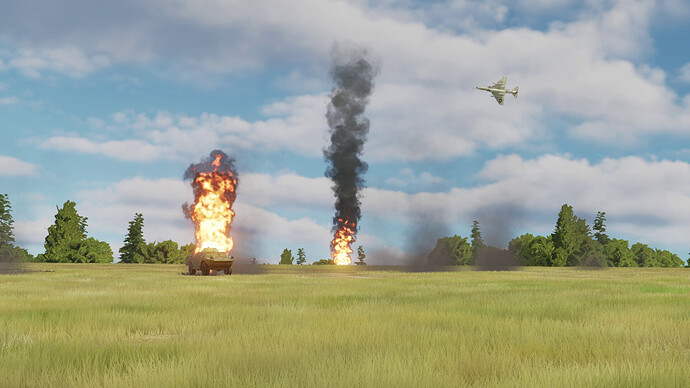 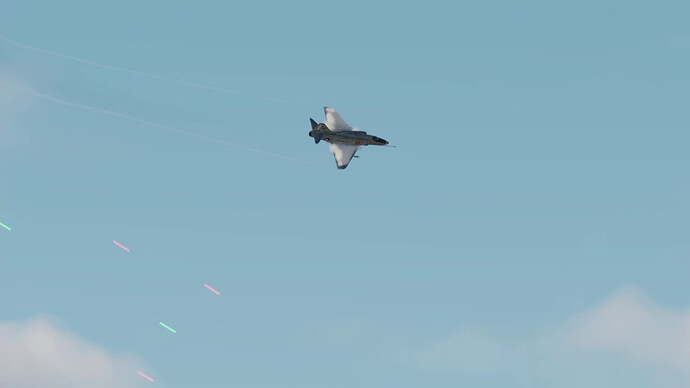 After my strafing runs, Four got cocky and ended up ejecting right over the airbase. We should be able to capture the field in the next two turns or so. Hopefully they won’t ship him off to the Hanoi Hilton before we get there. 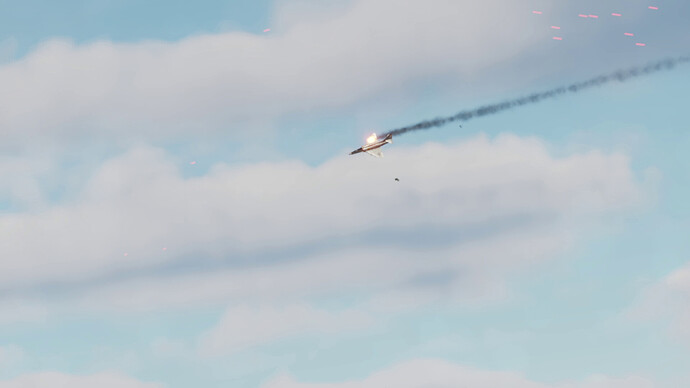 The convy was just leaving the airfield and the area was still heavily defended by ADA. The other flights that were supposed to suppress the ADA didn’t do a very good job, so after Four got hit I called everyone back to RTB. Two and Three still had plenty of bombs on their racks because they would only drop one pair per pass. 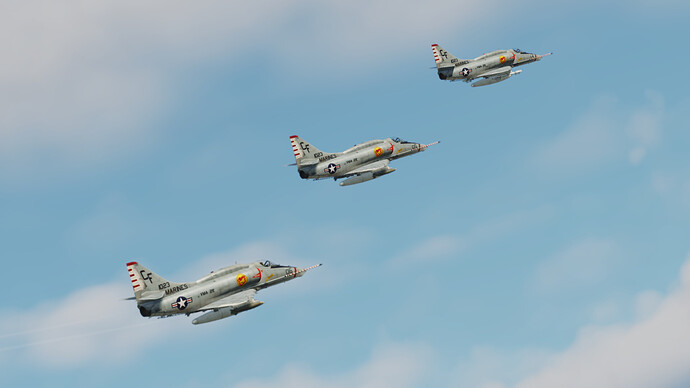 As we cruised past Gudauta our forces had seized the airfield. 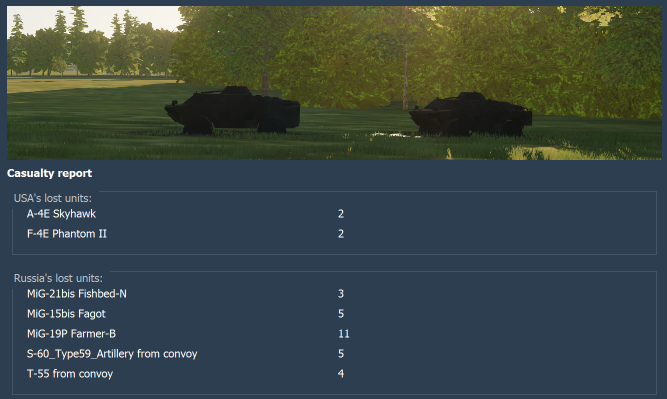 Bonus videos from Turns 1 and 2.