The united States has long stayed ahead of this trend by being the go-to place for nearly anyone in the world looking for a better life; but with new attitudes towards immigration sweeping the country, will we turn back the very influx of young people needed to sustain our social safety net in the future?

I love that that site just cut and pasted the entire NY Times article under pop-over ads. 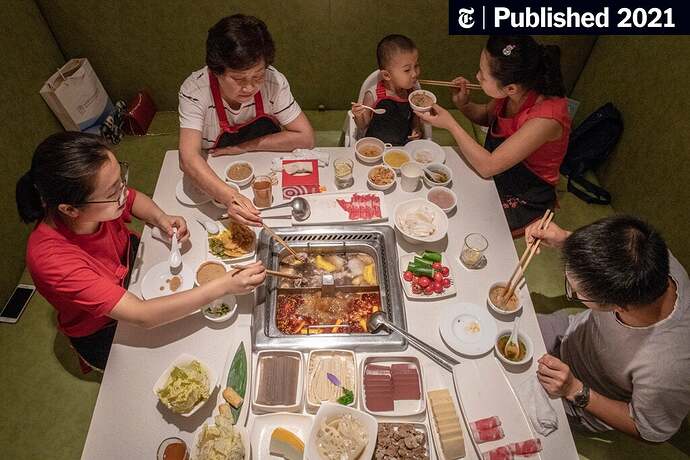 Fewer babies’ cries. More abandoned homes. Toward the middle of this century, as deaths start to exceed births, changes will come that are hard to fathom.

A population not increasing exponentially sounds good to me. We just need some sort of slow-paced old person gladiator places opened up to push down the curve on the right.

I love that that site just cut and pasted the entire NY Times article under pop-over ads.

Well, a secret I discovered a while ago about modern journalism is that any article behind a pay-wall nowadays is almost certainly accessible for free somewhere else if you look for it, as the authors contract the story out to any outlet willing to pay them a little bit. The era of the exclusive story is kinda dead…

A population not increasing exponentially sounds good to me. We just need some sort of slow-paced old person gladiator places opened up to push down the curve on the right.

Below are quotes from a older BBC article. I’ve been reading the downloaded report for the past two weeks. You can get the PDF report from link in the article.

The US Intelligence Community has issued a survey of where the world may end up in 2040.

It warns of a political volatility and growing international competition or even conflict.

The report entitled A More Contested World is an attempt to look at key trends and outlines a series of possible scenarios.

It is the seventh such report with one coming every four years since 1997 from the National Intelligence Council.

The Global Trends 2040 report does not make comfortable reading if you are a political leader or international diplomat - or hope to be one in the coming years.

The latest attempt by the US National Intelligence Council to understand what may happen within and between countries points to uncertainty and instability. It firstly focuses on the key factors driving change.

Has the world ever really been stable? It all sort of smacks of Malthusianism - Wikipedia and wallowing in the future doom. Intelligence services will rarely suggest their budgets should be cut because everything is looking too good.

Science and education spreading throughout the world essentially caused the population curve to change from abx , which I think is a good thing. It now depends on whether those same two things will help solve the next steps; looking after the old, shifting away from full employment and reusing limited resources rather than just going to war. We could have easily blown ourselves up in the 60’s for the same reasons but didn’t, so I don’t feel that 2040 is destined for a Mad Max sequel.

We could have easily blown ourselves up in the 60’s for the same reasons but didn’t, so I don’t feel that 2040 is destined for a Mad Max sequel.

We can feel that way, but the government has to look at all possibilities and try, as much as it can, to be prepared. Especially since if we walk into a disaster with no plans in hand, many will ask retroactively. “Well, what the heck are we paying you guys for?”

it all sort of smacks of…wallowing in the future doom.

Doom and Gloom sell. Happy doesn’t. Just my observations over the years.

So, are we saying that we prefer that the government didn’t try to look ahead and attempt to do emergency planning?

This has massive ramifications. Japan is a generation ahead of us in suffering through an aging population and an evermore insufficient workforce to support them. If I were a woman there is no way “on god’s green goodness” (quoting Will Ferrell) I would have a baby. They just get in the way of the professional life you’ve built for yourself. Plus, they are by far the most expensive investment you’ll ever make. And as investments the prospectus for babies is a frightening read. The real shocker from the NYT article is that Nigeria will have a bigger population than China by 2050.

The real shocker from the NYT article is that Nigeria will have a bigger population than China by 2050.

I think they mentioned the possibility of the first African superpower. Extrapolate those sort of geopolitical changes forward, and assuming the human race survives its own folly, the world of a hundred or so years from now is likely to culturally and otherwise nearly unrecognizable to a person of today.

the world of a hundred or so years from now is likely to culturally and otherwise nearly unrecognizable to a person of today.

Aint that awesome? I think it is. Change is good. It’s where progress happens.

All I took away from this is that I so want to go to the first Tremendous Bowl.

On a more serious note, I agree that change can be good. But historically, the changing itself can often prove to be very, very bad for very
many people.

Right! Change makes losers out of former winners. Disenfranchised and “left behind” peoples don’t go quietly into the night. They fight. They die, willingly.

Which is kind of the point of the entire article. Societal changes on this scale almost inevitably come with challenges, and there are two ways to face such challenges.

One being to hopefully slide by on luck, and the other being to try anticipate them and be ready to deal with them beforehand.

I would think any national leaders worth their paychecks will automatically seek 2 chart the safest course for their nations and their people by looking ahead, just as diligently as anyone seeking to make plans for the future, weather that future be for themselves or for their children…

And of course, I’m a science-fiction fan. Probably half of the things I’ve read in my life have concerned the shape of the future!

I would think any national leaders worth their paychecks