Introduction Baltic Dragon. If you fly single player campaigns in DCS World, by now you must surely know this name. He has become a prolific, focused DCS mission builder and campaign designer. Here at Mudspike, we have previewed his previous work: “Einstein” with the Mirage 2000C campaign, “BeachAV8R” with The Enemy Within and with Iron…

Something for everyone to read while waiting for DCS 2.5 to download and install

For anyone wondering, @Baltic_Dragon has also update the RAZBAM Mirage 2000C Campaign to work with DCS World 2.5 as well. Check out the info: here.

Check it out! 1200 lines voiced by the community!

Thanks for the info about that

seems that the updated campaign doesn’t work too well for some reason so I will work on it some more in the coming days!

Thanks for the great write-up…! That makes two reasons I should give the M2000C (which I’ve not flown yet!) a whirl…

Oh man, you should. It’s great.

It looks good and therefore it flies good. Such a hotrod. Fast as bad news, but it sheds that smash like a cheap woman sheds her decency if you make more than half a hard turn.

Even though its a full realism DCS module, its a simple jet. Just a tad more complex than a F-5E, so the amount of study required is only slightly above the FC3 jets.

La Mirage may be my favourite DCS module. I just love that thing.

Hey guys, as an update - the campaign has been sent for testing to ED. Don’t know when it will be out as I imagine that guys are now busy with Open Beta and turning it into stable, but this is almost the end of the road 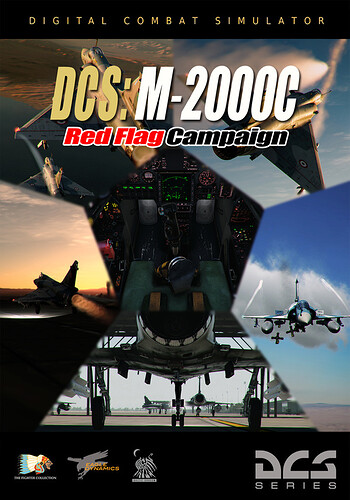 Kudos to @komemiute, he has done a stellar job, as always! And to participants of the M-2000C Manual cover contest for great screenshots!

Once more I’d like to thank so very much @Baltic_Dragon for the opportunity and his thorough support.
It was a true pleasure to work him, as usual!

The campaign is out! It will take me a couple of months but I am looking forward to flying this one fully!

The M-2000C Red Flag Campaign is a story-driven campaign that takes place during an extraordinary Red Flag exercise at the Nevada Test and Training Range (NTTR). The campaign backstory revolves around growing hostilities between Iran and its...

It’s been a while: first the Mirage 2000C gathered some bugs, then it got a lot of fixes and new features but then AI updates broke some parts of the campaign.

But now, more than 4 years after release, the amazing and generous @Baltic_Dragon has reworked, tested and fixed every mission in the campaign.

If you were looking for something to do in DCS single player, this is it! Look up some videos of the new jammer and lost lock functionality, shake that stick before doing the FBW test and jump into some of the most realistic and fun missions that exist in DCS.

The reworked campaign has been submitted to ED and is hopefully in the next patch:

Dear all, I know that recently there were some problems with the M-2000C Red Flag campaign, some created by AI logic at Nellis, some because of other quirks. I am currently reflying all the missions and intend to give it a thorough look & fix all...

@Freak, thanks for the heads up. Back in the day I played the first few missions and, as I am want to do, got distracted by the next shiny thing and forgot to go back. Now I will. The 2000 is the most interesting and fleshed-out fixed-wing bird in the sim IMO. Very kind of you @Baltic_Dragon for updating. That was a labor of love. S!