First some background information on the the space programs; US & China. News of the Chinese landing on Mars. Oh, thanks for creating this thread and sharing these videos. I was just about to delve into learning more about Chinese rover, and you greatly assisted me.

The new space race is on. We’re going to be seeing a lot more of this stuff. I’m sure will be most interesting.

I think if we want to see boots on Mars sooner rather than later, then this is probably the fastest way that happens. 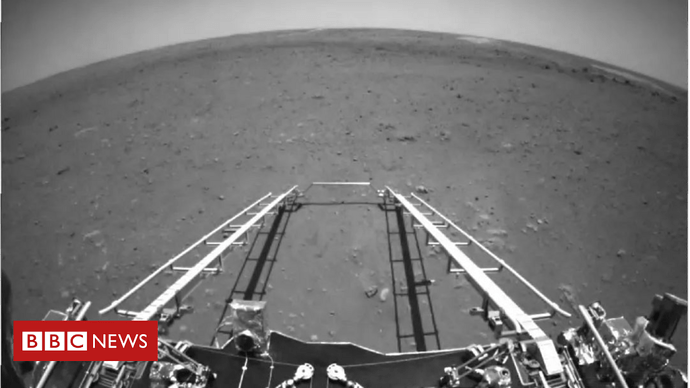 Imagery comes back from the six-wheeled robot that landed successfully at the weekend.

Interesting. I see the Chinese scientists are “hoping” to get 90 days of service with the rover. I will have to look for additional stories about this rover because I would have thought it would be built to last much longer. 90 days seems awful short but then again it is their first go at it which is significant.

It is interesting. A lot of China’s space efforts resemble earlier Western missions, except with some modern aspects.

At first glance you’d think they are well behind…but then again, the size of their economy, their ability to set budgets without having to worry about shifts in governments etc…they may well blast through the equivalent of the latest 40 years of “slow times” (post-Apollo) in Western space exploration in a fraction of the time…and then they are poised to overtake, as they are actually doing very well in innovation now, no longer limited to licencing and industrial espionage.

As @fearlessfrog said, if we want to see some exciting space stuff happening, nothing like a space race to help with that. Elon’s efforts to disrupt the status quo are obviously fantastic, but the more the merrier. Just need to hope it all stays civil, but so far the human space exploration has managed to do so quite well in that regard, even during more strained times in international politics (Apollo-Soyuz handshake and so on).

Tech wise it’s similar to Spirit/Opportunity, so about 2003. Those also had a planned mission duration of 90 days, but got to just under 7 years

. I guess the two biggest differences would be the advancement of CPU/systems in that time and the fact that their system doesn’t use a Sky Crane, so they are limited on how hard/heavy they can land.

The Russian independent Space Station, the end of ISS, and then the Lunar Gateway are all going to be stimulants to getting people to race again. As soon as there are different color boots on the Moon even will probably be enough to get flags waving and missions budgeted.

On 21 May, the Chinese rover rolled onto the Mars surface from its landing platform. Thereby, it made China the second nation that managed to drive a rover on another planet.

Third if you count the Martians, plus they use stealth 🥷

The Chinese will leapfrog everyone but the Martians, I think. A country so willing to cut corners that it willingly and unapologetically sends a rocket hurling back to Earth with no meaningful controlled reentry system will advance quickly if they have the money. And China has the money.

I think you’re probably right, just because it’ll take a nation-state level commitment to get people on Mars and China has more than money; it has a deep sense of feeling like it’s not being taken seriously in the world and that something that ends with a flag pole first will help with that.

One of the things I think tends to get overlooked in all the interactions with China is that a lot of the people don’t even like how they do things, but the love of their country, nationalism and desire to be seen as just equals in the world override that (incredibly to Western sensibilities).

The wildcard will be the private entities place in all this, the SpaceX and even Blue Origin etc. China doesn’t have those nor encourages things like that. I think they stand a slimmer chance of getting there first, just because I think it will take bigger resources than even they think, but they probably sneak into 2nd place or maybe even sneak a win.

Space isn’t my thing. So when I speak about it, it should be obvious to all that I am speaking out of my rectum. But I believe in government. There are some things that the private sector can do, but all big things come from the state. Countries that recognize that do big things. Everyone else watches from jumbo screens placed in the city common.

I think for private companies there’s been a fantastic run with SpaceX, but I do sort of worry that the first serious accident will probably impact them differently than a state. To do hard things it might require people losing their lives, despite every precaution, and that’s just a whole different ball of wax compared to blown up steel tubes on a test stand with twitch streams. China would handle that just fine. A 1 year+ mission, outside the Earth’s zone, so much could go wrong.

Elon could go from hero to villain in a nanosecond with the loss of a crew. I guess I’m trying to say is that I think it needs to be a NASA mission to Mars, even if it uses SpaceX under contract for tech - a wholly private enterprise is fantastic until it doesn’t work and people die, and then it’ll get swamped with more government than it would ever imagine existed.