Me-262 only brought down during at landing?

Anyone know if the 262 was taken down in a dogfight?
I seem to get done on the landing when using the Me-262. That’s Chuck Yeager sneaking up on you…

The allies used to keep an eye on the jet bases and time their patrols with returning aircraft, to get them when they were most vulnerable; at low speed.
Many were shot down by bombers and some in dogfights.

I went down in a screaming dive, pushing everything forward – throttle, emergency throttle, propeller control and all. The Me262 had a good start, but I had the advantage of several thousand …

Yeah, it wasn’t only during landing but it was the easiest way of course.

Many were shot down by bombers

I don’t know, I wasn’t there.
Just what I’ve read. I guess it depends on what you consider to be “many” and who’s stats you look at.
Most were probably shot down in rat scrambles.

I don’t know, I wasn’t there.
Just what I’ve read. I guess it depends on what you consider to be “many” and who’s stats you look at.
Most were probably shot down in rat scrambles.

Imagine that you are a gunner in a bomber with jets whizzing by and you score a hit and down a me-262!

Given the speeds involved, the difficulties operating the 262, and the relative lack of experience in the Luftwaffe by that point in the war, it wouldn’t surprise me that most 262’s attacked from the rear quarter and there were far fewer forward/side than the 190s and 109s used. That means they were easier targets for the bombers, too.
Plus those engines were fragile. While a 109 or 190 might take a bunch of hits and be fine, a 262 could probably ingest some .50 casings and suffer an engine failure resulting in a bail!

Plus those engines were fragile.

Would not have surprised me if they spontaneously failed in flight either. With those lesser experienced pilots as well, I would gather being easy on the engines with combat stress may have fallen by the wayside too.

I remember that Il-2 Forgotten Battles modelled that behavior. Why I remember that after all those years? Maybe because I kept googling “why my engines catch fire during take-off”. You had to be really smooth with the throttles.

Some few were taken down. As example this amazing pilot was one of the few that taken down one of them: 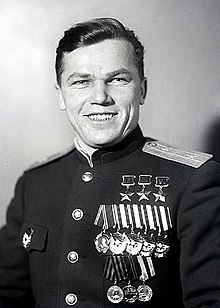 Ivan Nikitovich Kozhedub (Russian: Иван Hикитович Кожедуб; Ukrainian: Іван Микитович Кожедуб; 8 June 1920 – 8 August 1991) was a Soviet World War II fighter ace. Universally credited with over 60 solo victories, he is considered to be the highest scoring Soviet and Allied fighter pilot of World War II. He is one of the few pilots to have shot down a Messerschmitt Me 262 jet, and the first Soviet pilot to have done so. He was made a Hero of the Soviet Union on three occasions (4 February 1944, ...

Well over one hundred 262’s were shot down, again, depending on who’s sources you consider.
About as many were lost due to handling and technical mishaps.
Those claimed shot down while attacking bomber formations would normally go to the fighter, as they had gun cams to record the shooting. But it is believed that many of these claims actually belonged to the bomber gunners.
But as with any kill claims, they are made in the heat of the battle and often exaggerated.

But as with any kill claims, they are made in the heat of the battle O’Club after a few beers and often never exaggerated.

Fixed that for you.

Well, looks like we’ve found the next historical film role for Matt Damon!

Only because its faster not makes it invulnerable and the best ever made fighter in ww2. Speed is not all, for example MiG-25 is more fast than F-15 and is much worst than F15 in a close dogfight.
When we talk about ww2 were all dogfights is only in short distances because the only main weapons were cannons, maneuverability takes a very high value specially against another high maneuverable target/enemy.
Me-262 not only were very weak when taken shots on the engines (also bigger and more exposed target point from behind than a regular ww2 fighter) it was far from being the most and best maneuverable fighter in ww2. Infact their best tactic was run away, or try the touch and go. If some were catched in a classic dogfight it will sweat against the best fighter pilots and aircraft of ww2.

Yeah, the Schwalbe not doing its booming and zooming thing would soon be dead.