Not sure if you guys are Viggened out yet, but I thought I’d try out @Graywo1f’s Mozdok Attack mission for the AJS37 Viggen. This is the same mission we flew during his live stream, but this time I’m going solo to see how the gameplay compares.

Since I’m flying by myself, I’m going to approach it a bit differently, launching BK90 Mjolnirs with the MJ1 submunitions to take out the aircraft on the ramp.

I’ve also updated the flight plan so that a few waypoints are co-located with recognizable landmarks, so I can use them to update the Viggen’s pre-GPS navigation system. 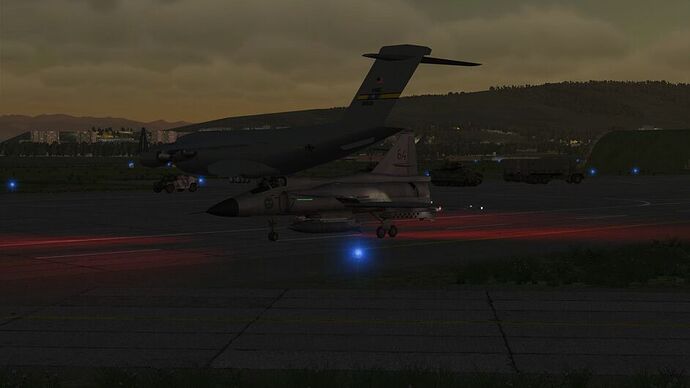 The Mjolnir is a powerful weapon, gives the Viggen a powerful punch, but it sure looks like someone tried to weaponize a Croc. 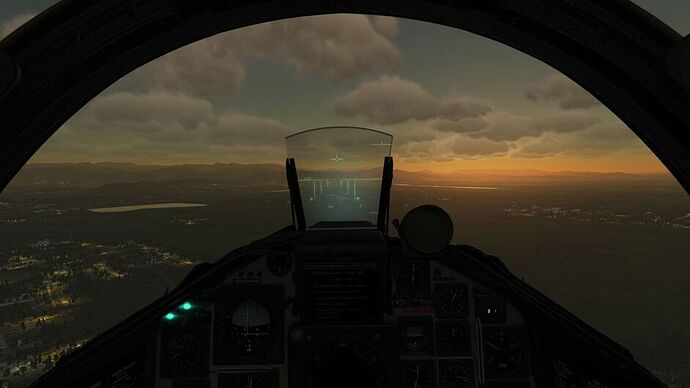 Takeoff into the early morning light. 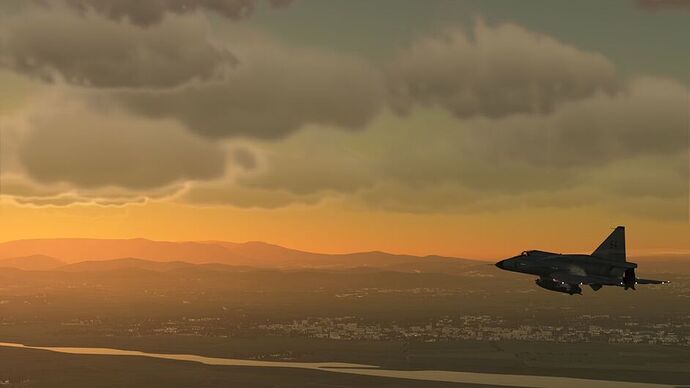 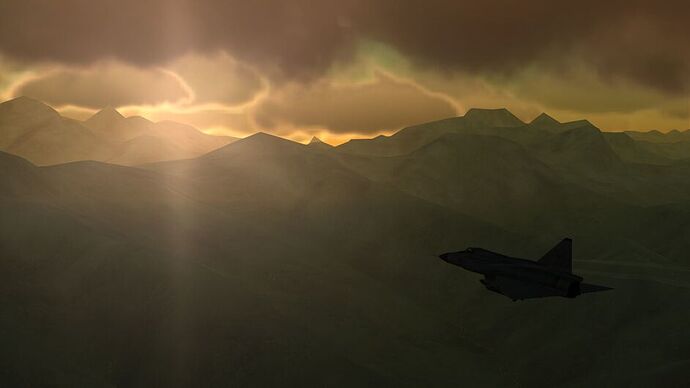 Aaah! Eat your heart out, @BeachAV8R! 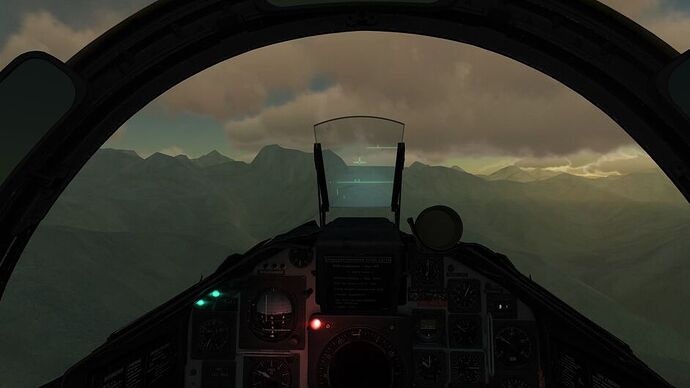 The first leg of the mission is on the lee side of the mountain, so I cruise in at mountain top level, economy speed, saving fuel in case I need to use burner at the target area. Or while trying to egress! 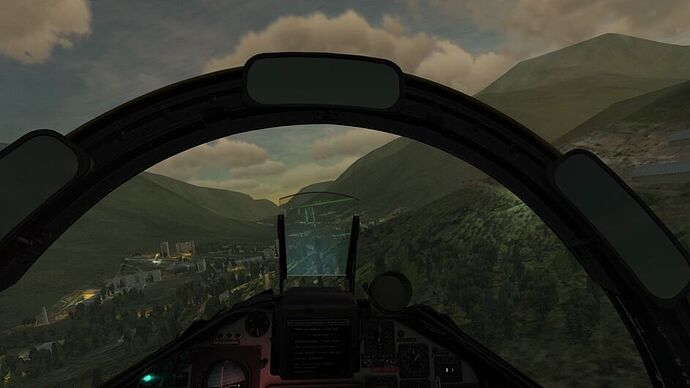 Once over the peak, I fence in and nose down into the canyon. A series of SAM sites are strategically placed along my ingress vector and I need to thread the needle, but I want to give the radars as little to work with as I can. Hugging the deck at 10-30m feels natural in this sporty little duck. 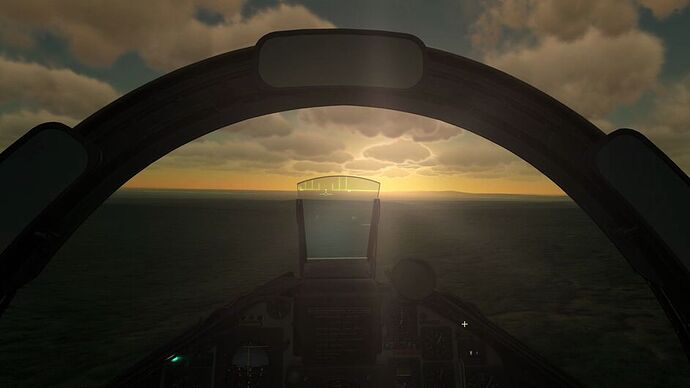 I exit out of the canyon into an impossibly flat plain. My RWR beeps and chirps in that sweet Swedish accent as the SAM sites furiously try to lock on to my spurious signature. I keep as low as I dare, torn between the chirping of my RWR and the slowly rolling hills racing underneath me. Heading into the sun, my visibility is greatly reduced and I often don’t spot a rapid slope until I’m already over it. 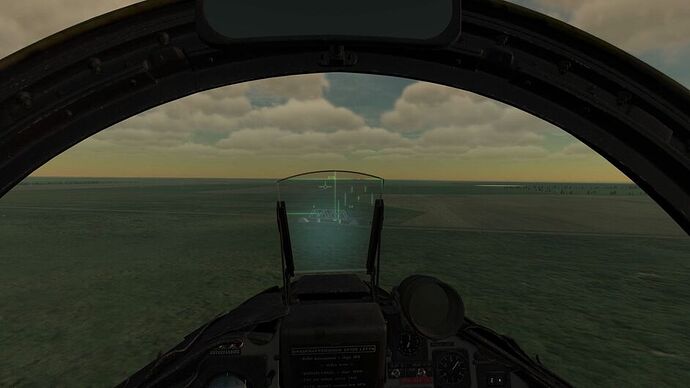 At the Initial point (WP4) I spot my fix point, an old railroad bridge, and it’s clear my nav system has drifted a significant amount, even in that short flight. This amount of nav error, unchecked, would have resulted in most of the BK90’s submunitions missing their target. Luckily, I’m able to update the solution with a quick pull on the fix trigger and turn inbound to the target. 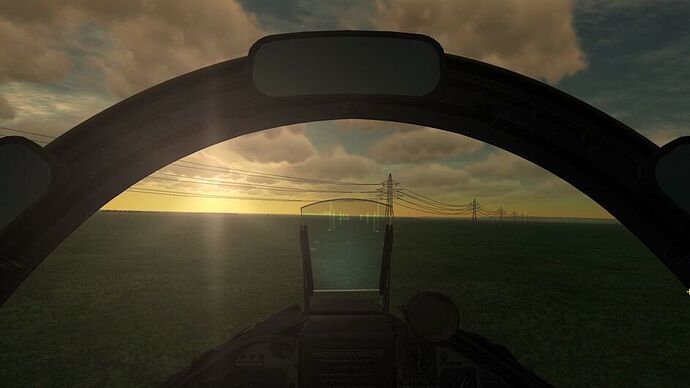 Burners kicked on, I’m heading into the now, and I am glued to the deck. Instead of popping up over power lines, I scooch my way underneath, involuntarily scrunching my shoulders and hunching down in my desk cockpit as I do so. The glare is intense and I keep checking the distance to go to make sure I don’t overfly the target. With this altitude and glare, I won’t get much visual notice before I need to launch my weapons.

I set the BK90 release mode to single - I’m going to launch one at the IL76s and the other at the Tu-22s and then get the heck out of dodge. 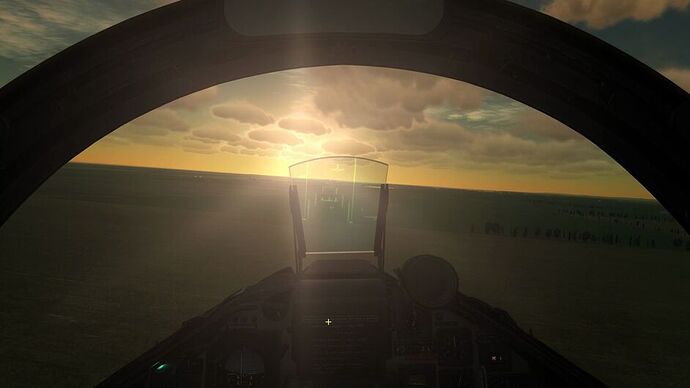 As I near the target point, I switch to ANF mode which brings up the BK90 release symbology. The three vertical tick marks near the bottom represent the maximum release distance for the BK90 at my airspeed and altitude and the horizontal line underneath it represents my distance.

As I approach the release condition, I gently pop up, press and hold Trigger UNSAFE, and hold the trigger down until I hear (and feel!) the wepaon weapon separate. Releasing the trigger and re-safeing, I punch in the next target point and repeat the procedure to launch the second BK90. 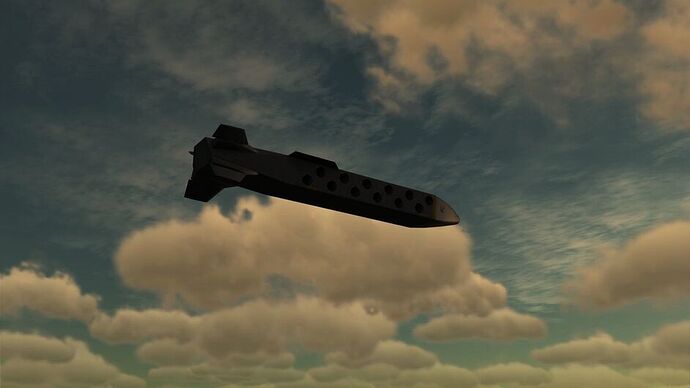 I’ve already spent more time above 10 m than I care to, so I dive back down to the ground and kick in stage 3 burner. As I bank to make my turn to egress, I look back for any incoming fire or aircraft, and happen to catch my MJ1’s tearing up the Tu-22s. 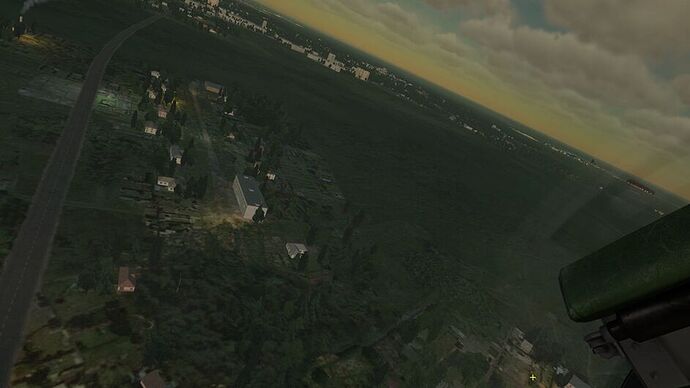 I decide to bust immersion a little go with an F7 view to check out the damage. 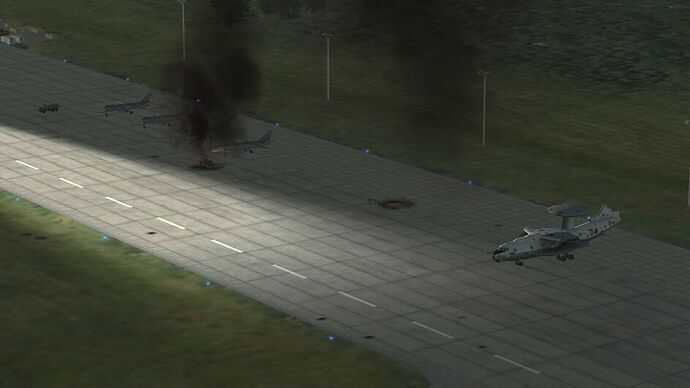 The IL-76s are toast, and I damaged some other aircraft parked near them as well. 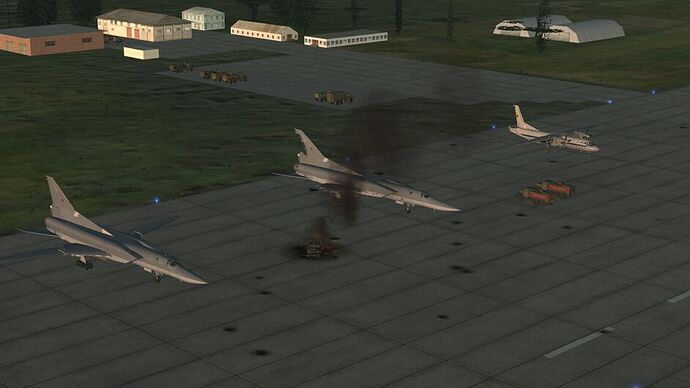 While these Tu-22s look unscathed in this photo, one has both of its wings ripped off, and the other is riddled with holes. I’m not sure how the two fuel trucks in the middle of the blast zone survived, but I’m happy with the amount of carnage I’ve left behind.

Now to make it home.

If flying into the airbase was like flying into the maw, egressing is like running after having kicked a hive of killer bees. The SAMs are angry, there may or may not be some MiG-29s taking off behind me, and I’ve got a lot of open space with rolling hills and powerlines before I can get to the relative safety of the canyon.

My RWR blips and boops again, and I can hear the an occasional steady tone, indicating a tracking lock. My head’s on a swivel, looking behind for enemy aircraft, to the sides for incoming missiles, and ahead for power lines or hills. I grind my external tank along the ground until I finally make it to the canyon entrance. 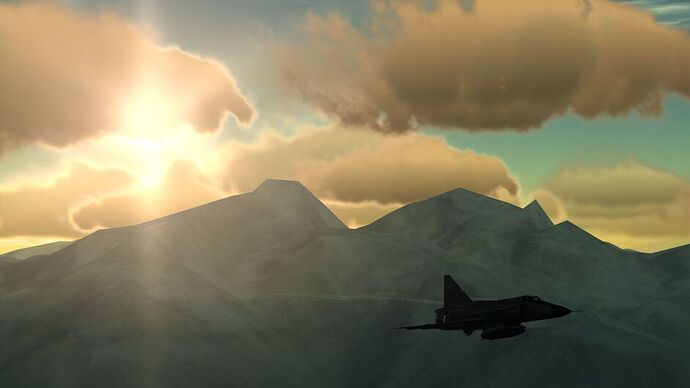 It takes a few minutes of RWR silence and a few more Swedish miles up the canyon before I feel I can relax, but in no time at all, I’m overflying home base and beginning my base turn. 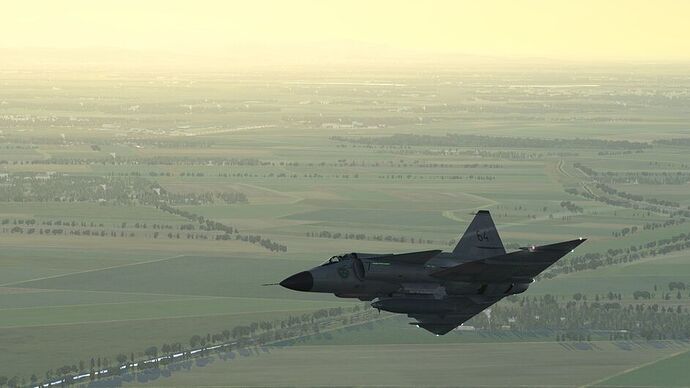 I engage the Auto-Fart Kontrol {snicker snicker} and line up for landing. 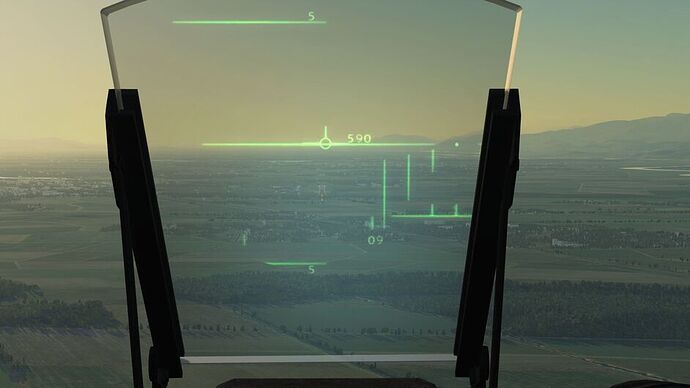 The waypoint indicator off to the side of the HUD indicates a drifted nav solution. The TILS system will shortly update it, although I’m perfectly able to make a visual approach here. 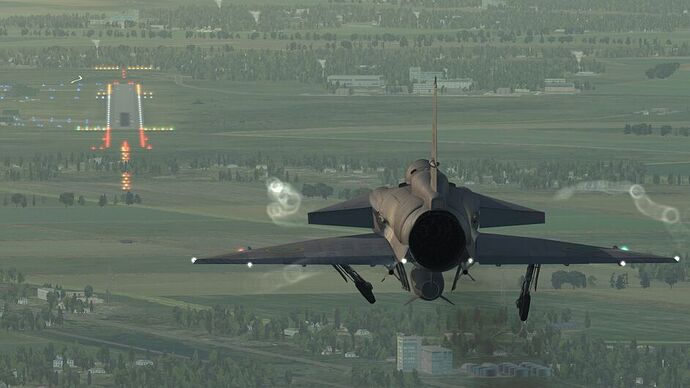 The bulky gear bring a lot of drag as well. AFK spools up the engine to maintain angle-of-attack airspeed. I pull the thrust reverser, which arms it to automatically deploy once the nose gear touches down. 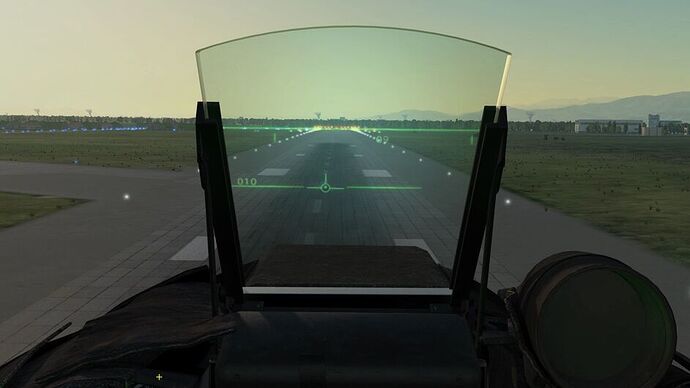 At 15m altitude, the HUD display changes so that my flight path marker now shows my descent rate. I hold pitch to maintain the marker on the line and let the aircraft crash into the runway. 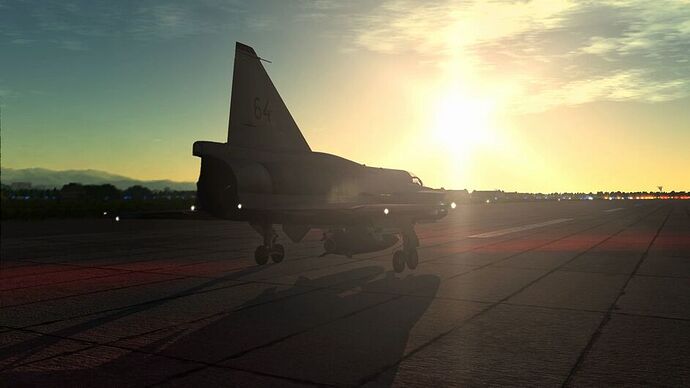 The main gear absorb the impact with barley barely a grunt and the nosewheel slams onto the runway, compressing the strut, and closing switches that allow the thrust reverser to close.

Counter-intuitively, I throttle up to increase the thrust reversal, and the Viggen decelerates quickly to a halt.

Flying UNDER power lines is a little too advanced for me though.

I might be mixing things up in my head, but if I remember correctly the Bk-90 is a direct descendant of the MW-1, the famous Luftwaffe cluster dispenser of the cold war. It’s nice to see it tearing up air bases full of dastardly reds.

The main gear absorb the impact with barley a grunt

How much does barley usually grunt?

Cant wait for more peeps to give it a shot!

Awesome AAR, @EinsteinEP!
Flying under powerlines is generally not adviceable since they tend to have a more impressive PK than SAMs and AAA. Telephone lines though…

Beautiful screens and and an excellent AAR - you should consider becoming a writer for Mudspike…!

Just 'cause I know this will bug you but what is a wepaon?

Excellent write up! I am looking forward to flying this beauty in a few days!

You guys are harsh. I’m going to go cry in a conrer now.

I want to believe this was on purpose

I want to believe this was on purpose

Everything I do is on porpoise.

Everything I do is on porpoise.

And everything I do is on tortoise!

Are your Porpoise and Tortoise turquoise?

And everything I do is on tortoise! 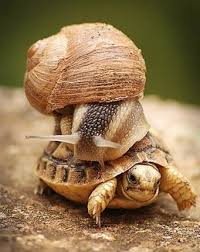 very nice @EinsteinEP enjoyed reading it, cant wait to do some fly in with you guys after i learn that bird on Friday