This guy lives near my mum but basically lives on the loop. A truly great channel to watch. His fairford videos are incredible.
I often watch them after an airshow and see more detail than in Real life.
Nice guy too With live traffic turned on, it must be quite a show out there.

It seems to be busier if you connect to the Western Europe server… I saw a F15 disguised as a Bonanza fly past at great speed a few times.

. I was hoping for some Hawks, F35’s etc, but the most active aircraft type was the MB339.

After a successful carrier trap… 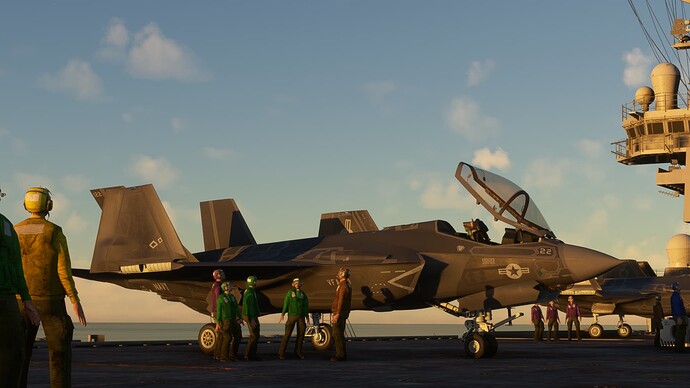 My Twotter Harbour Air skin turned up - amazing what people contribute. This stuff is getting photorealistic… 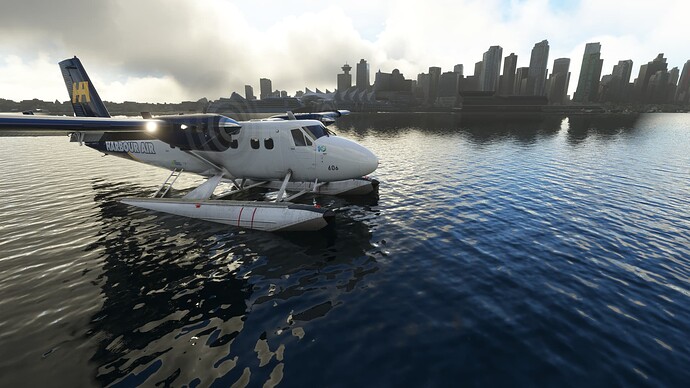 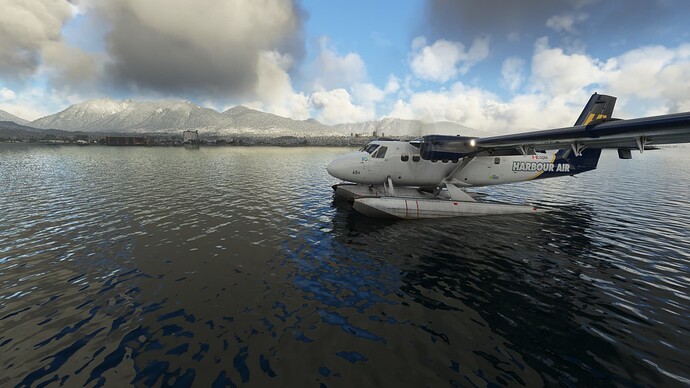 Today I tested the high altitude capabilities of the P-38 and man, I missed flying a fast prop fighter apparently!

I took off from my home airport EDSB and headed north, just to see how quickly I could make it to Cologne. VFR to Leverkusen (EDKL) to be precise.
As it turned out: Quickly!

I took a few nice screens on the way so here they are. 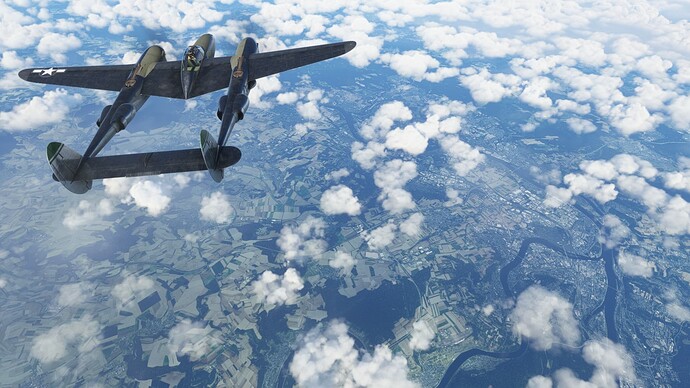 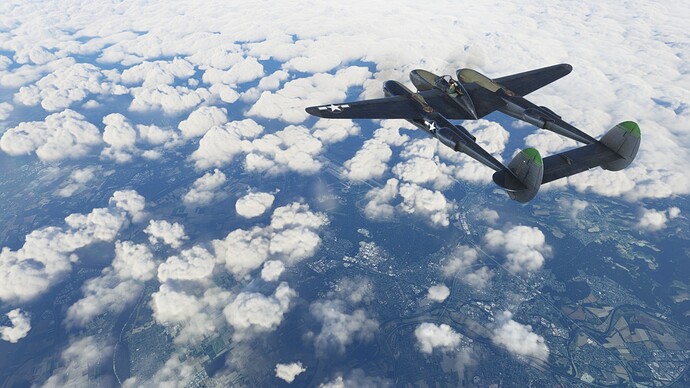 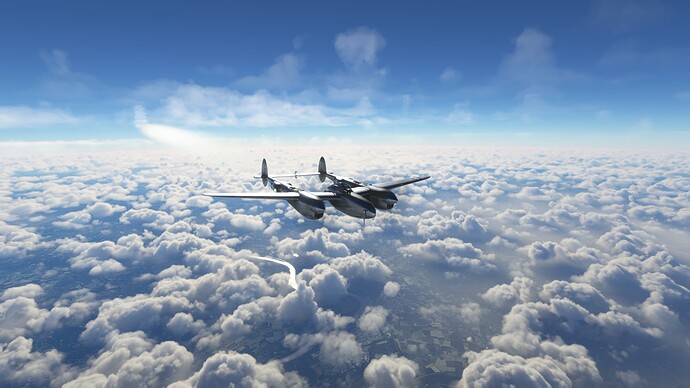 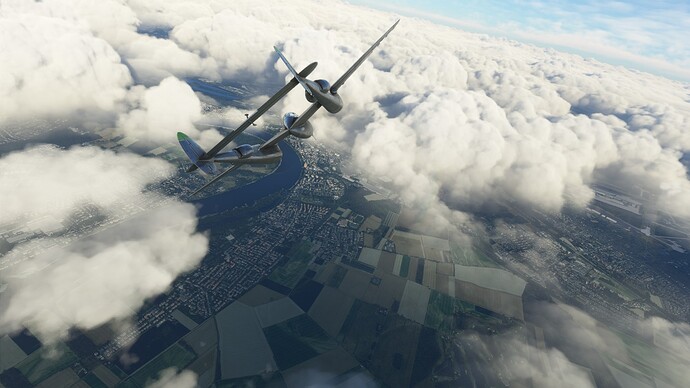 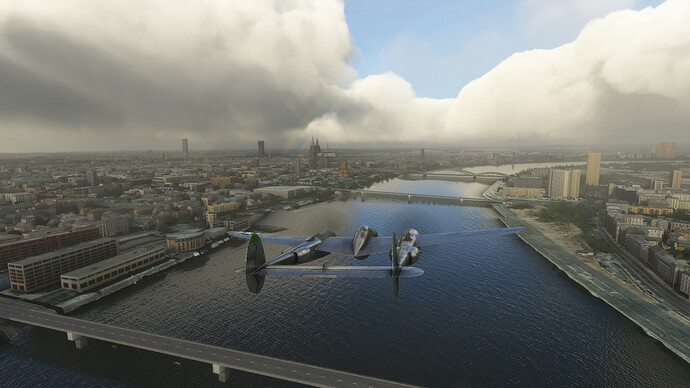 I think I might a a tad low. But probably it just looks that way, the cathedral is pretty tall. 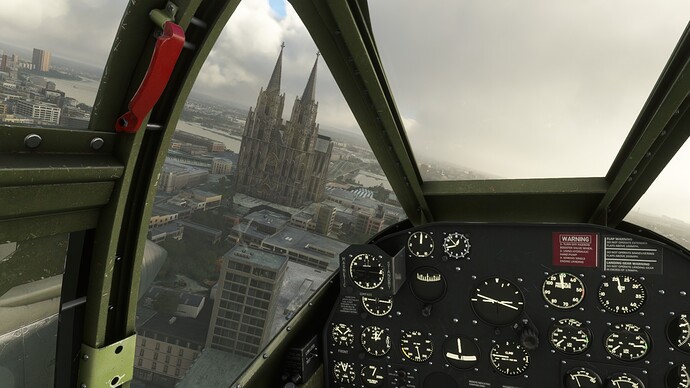 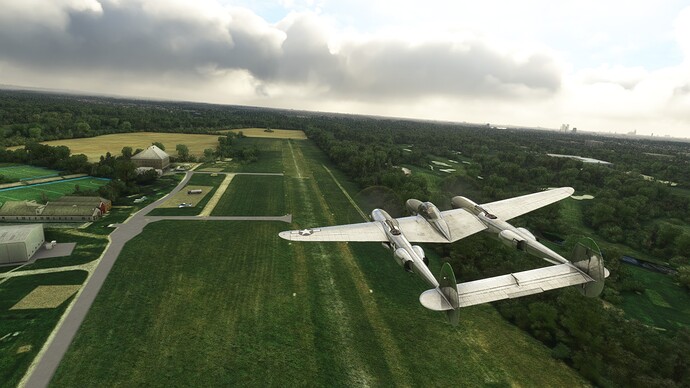 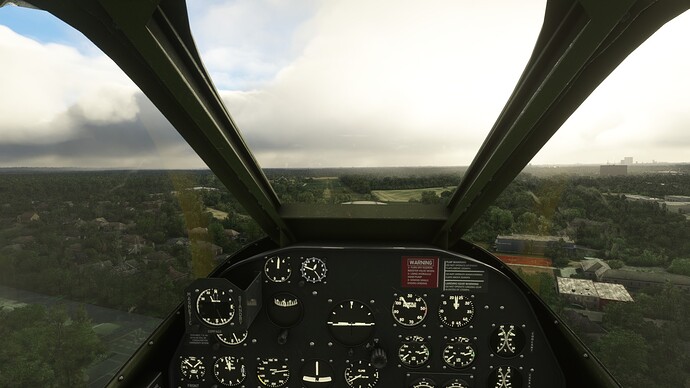 And landed. 50 minutes of flight. 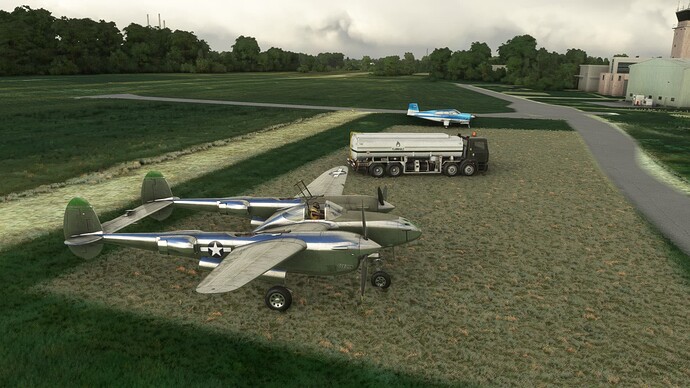 My navigation was… a bit basic. Not very straight. 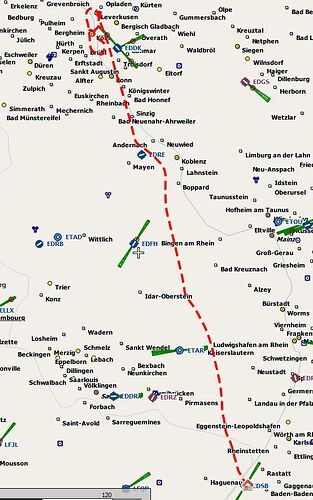 I think that the rolling swells in MSFS with 30 kt wind looks spectacular in motion.

I must have missed it, where can I find the LHA?

This package contains static landable objects for the America class ships and is primarily meant as companion of IndiaFoxtEcho F-35 aircraft for STOVL operation The America class formerly the LHA R class is a ship class of landing helicopter assault...

Thanks. Although it’s a shame that they are static objects, without TACAN, it’s still fun to fly out from China Lake or Miramar and do some STOVL work. America is on a heading of 260, so if you dial up the surface winds to be something like 30 kts from 260, you have to maintain 30 kts forward airspeed for a vertical landing. The LHAs are POIs on the world map, so you can add them as destinations in a flight plan and they will show up on a nav page.

The ocean swells look pretty amazing with that surface wind, but I would like it a bit better if the ships moved and they had pitching decks. I was watching one of Ward Carol’s Tomcat RIO videos recently and heard him talk about an experience when Raven One series author Kevin Miller was his LSO during a rough seas recovery and how either Ward or his pilot saw the ship’s screws when they were in the groove. Frightening in real life, but might be fun in a simulator.

Looks like there is some 3rd party ship movement and wake dev going on. You can’t hold the community back

That’s funny. If I saw the ships screws clearing the water in the sim, I’d think it was a bug!

As a former Harrier guy, I am proud to say that I am a member of the “12 Trap Club” and both times I went out to the USS Forrest Fire (Forrestal), there was nary a whitecap in sight.

Though my wingman did lose a boot.

After that, I was a big proponent of the VSTOL adage that it’s easier to stop and land, than to land and stop!

As a former Harrier guy

Oh man, I had no idea. It’s wonderful that DCS and consumer flight sims in general, have reached the point where they’ve become interesting to those with real life experience.

I’m really looking forward to getting back in the Harrier when the South Atlantic terrain arrives. From what I read on the Razbam discord, ED has had the map for about a month now. So it shouldn’t be long. I know that the Harrier has a pretty rich combat history in Afghanistan and Iraq, but the reason that the Falklands conflict is so appealing is that it was used in both A2A and A2G missions. And from the testing and mission building that @jross and I did last year, it seems that the A-4E is a pretty comparable opponent to the AV-8B that we have in DCS.

I’m not a huge DCSer, but I am definitely looking forward to that as well. It’s a perfect scenario for a Battle of the Transonic Jets!

The recently updated C17 by Destroyer121 is really shaping up nicely… 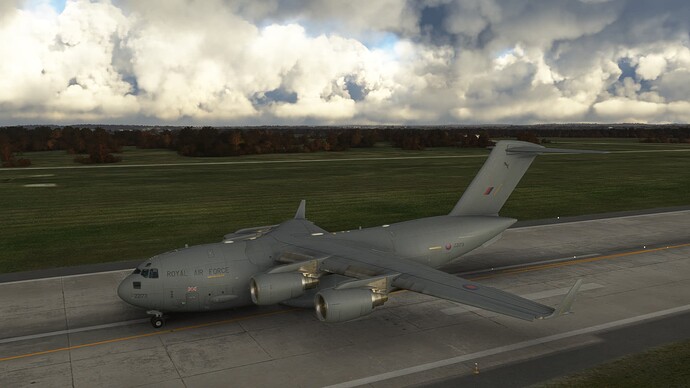 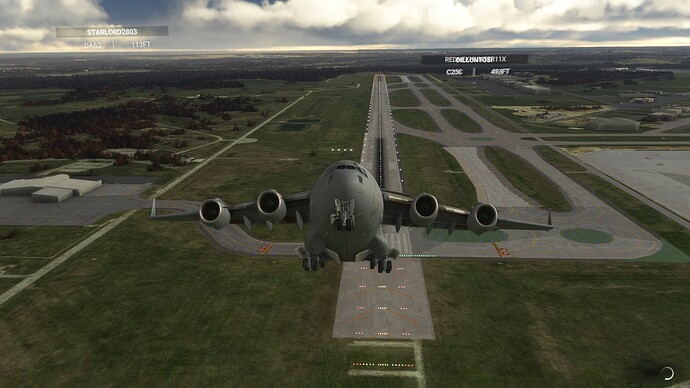 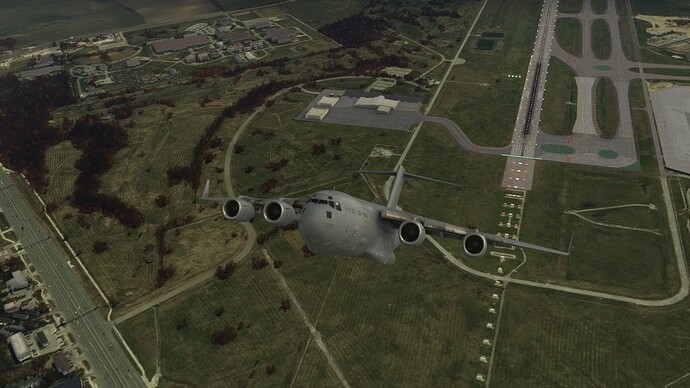 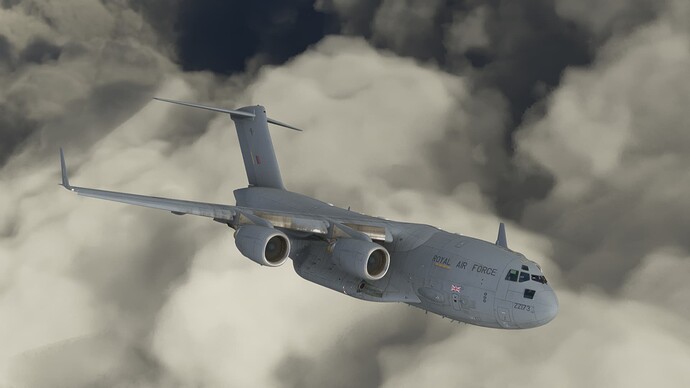 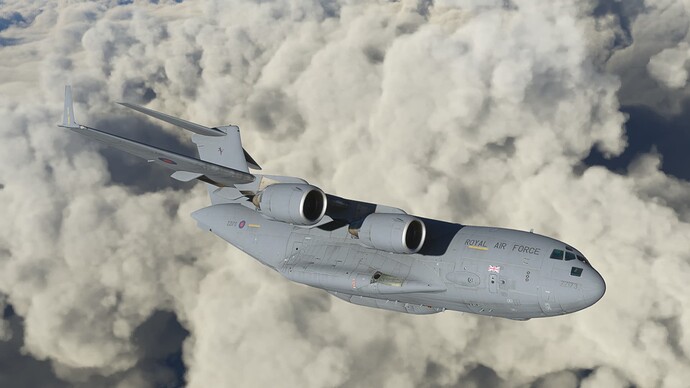 There are still some things in the cockpit that need work, but it flies nicely, has some nice animations for the ramp and doors. It looks great too!

And we all know I have a weakness for vintage aircraft… 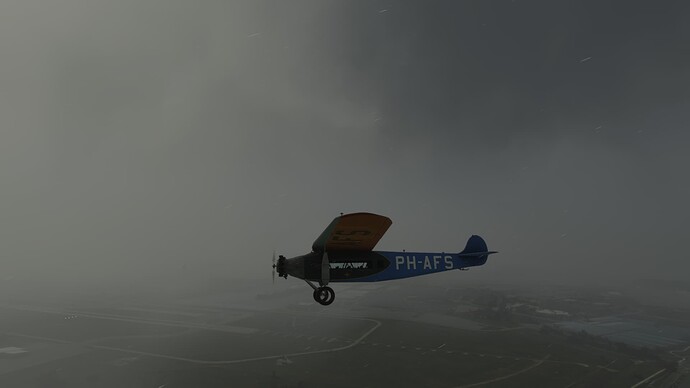 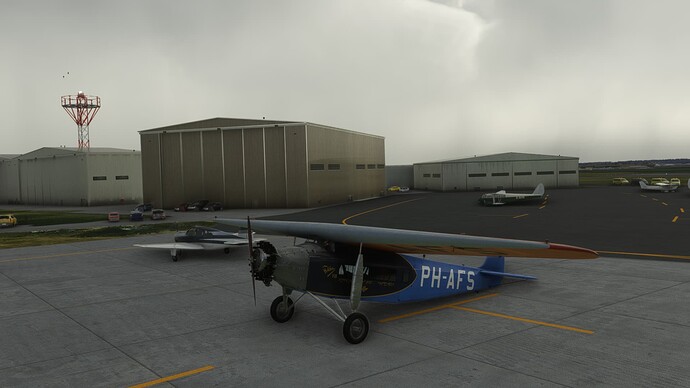 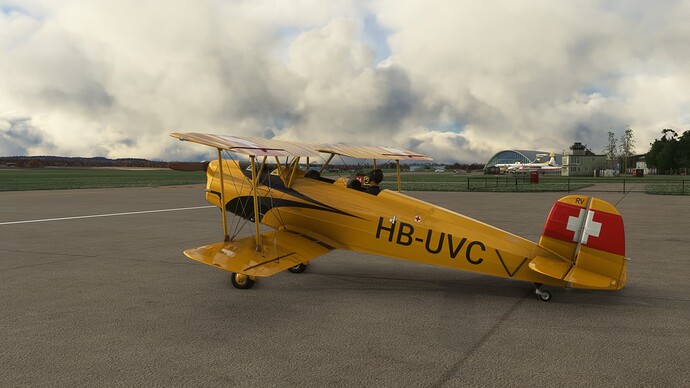 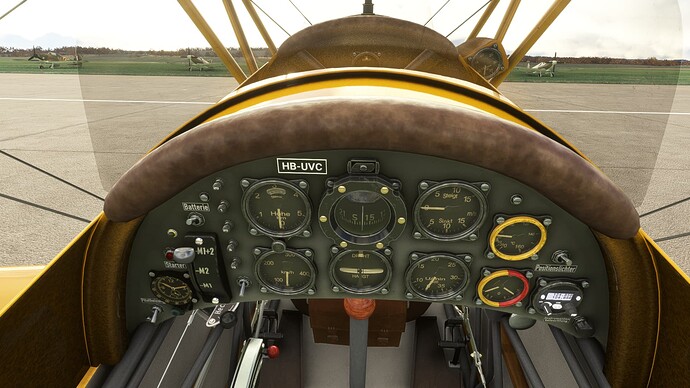 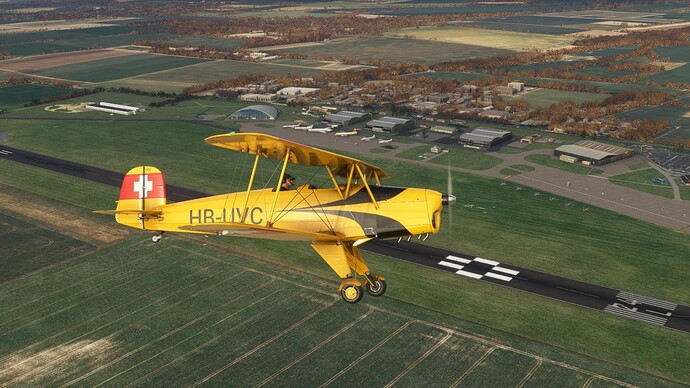 I have a weakness for vintage aircraft…

I believe one is coming from the same developer that recently brought us the Drifter ultralight.