My Battlefield 1 opinion, w/o spoilers

I almost always play HC in the past and when it comes out, but all HC really does in the BF series is lower your solider health from 100 to 60… no lowering for vehicles etc etc which is the biggest problem I see. WW1 tanks should be slower and easier to kill… with the right unlocks and players they dominate way to much.

vehicles have always been a problem in battlefield

I had the pleasure of chasing Magnum around the Suez and Italy a few nights ago. Having an experienced player call the shots converted a beautiful twitch shooter into something that was procedurally almost like ARMA. I noticed from watching him a characteristic that I have seen in other experienced players: survivability tracks a similar curve with aggressiveness. I was playing the game by maximizing my time in cover. In this game, staying anywhere (cover or exposed) gets you killed every 42 seconds. He runs, sees and shoots, all while paying strict attention to the ebb and flow of the battle. It was super fun and I hope the chance comes again soon.

Thx… ya, I lead better then I shoot in these games.

I finally got a chance to try BF1 last night and I started with the singleplayer tank campaign and I really enjoyed it. These days I don’t expect much from the SP campaign other than to get my mouse and gfx settings sorted out before jumping into MP, but this one was so enjoyable that I spent the night playing it.

Overall it’s nice to get back to a battlefield with no heatvision, no drones, no cruise missiles, just good old fashioned sights, scopes and melee weapons. Reminds me of how fun BF1942 was.

Looking forward to more SP this weekend and then joining the MP fun that I liked in the beta.

Anybody playing Battlefield 1 these days? I’m still going strong. Many of the DLC maps are pretty good.

This weekend is a 2xp event, so I’ve been grinding on some meatgrinder maps to wrap up some points.

Today I had one of my better matches in BF1. Happy to say, while I was representing Mudspike aka [MUD] in front of my name.

If anybody else is playing, let me know and I can add you to the platoon. 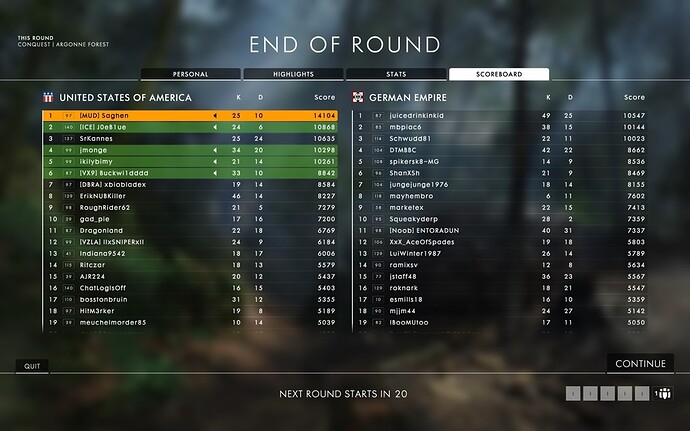 That was a good round! I’ve perhaps 200 hours and have never veen in the top 3. (But then you remember my habitual inept performance in ARMA). Alas, I only have the xbox version.

Send me an invite, I jump in sometimes when I have time.

I got a number 1 position simply by playing objectives hard, had a great squad which helped.

The biggest issue with this title bar none is Origin. Why EA with all of their vast resources can’t get it right after all this time is simply beyond me.

Why EA with all of their vast resources can’t get it right after all this time is simply beyond me.

Well, consider how much money they’re making with each successive title and I’d say by their definition they’re getting it right, consistently, year after year.

After BF3, I couldn’t get a Battlefield game on the PC any longer. Not after I realized that the console versions had better server support than the PC version. The whole Battlelog thing (Facebook with guns) turned me off as well.

Judging by sales, this obviously works for some people, but for me, I think it’s a tacit admission that I’m just getting old and that my tastes are changing.

I agree with you on the server management BS, not sure about the Battelog thing as I haven’t used it.

I don’t really over analyze it though, it’s quick for me to drop into a game a get a few quick rounds in.

Battlelog was only a thing for Battlefield 3, Battlefield Hardline and Battlefield 4. With Battlefield 1, they got rid of Battlelog completely and used a standard in-game server browser like we were used to in the BF1942/BF2 days.

They even got rid of Battlelog for bf3. Much more streamlined now. Easy to switch between bf1, bf3, bf4 and hardline.

I was always getting some kind of plugin error with that stupid browser thing.

Well, that’s a good thing. Glad EA dropped that for the PC versions. It was a stupid way to start a game.