My first 3 hours with the Oculus Rift

UPS delivered my Rift as I was walking out the door last night for lacrosse practice. A couple of hours later with workout, shower, and dinner completed, I begin the methodical unboxing, downloading of software, and connection of the two USB 3.0 and one HDMI cables required by googles and sensor. A repeatable BSOD occurs during the Oculus setup routine and and a quick Google search finds that this is due to the USB display drivers installed on my system. Bummer. I normally use this secondary display rotated to portrait orientation to show PDF manuals and navigation charts. Will use a tablet from now on I suppose.

Setup complete, the fledgling VR user is presented with various scenes that progress in complexity. Rather quickly it becomes apparent that you are embarking on a journey from which you will not likely soon return. Without giving away more spoilers than necessary, suffice it to know that the little alien dude really got my attention.

Enough plodding around. It’s an hour before midnight and with tomorrow’s stand up time of 6AM, let’s see how a F-5E3 looks in VR. I shut down the Oculus software, and then launch DCS World 2 dot something, which of course causes Oculus software to reload. Then the persistent application prevents me from running DCS, until I go into Oculus’s General settings and turn on a switch that will allow running software from an unknown source. That completed, I launch DCS again and stumble through the DCS settings menu for display, which allows me to chose a VR preset. Looking much better. Hindsight being what it is, perhaps I should have done this before connecting the VR gear.

I load a mission that begins with a takeoff from Nellis in the F-5E-3 and arrive at the point of clicking Fly. No matter how carefully I click, nothing happens. The problem is that when you reach this screen either during the launching of the sim or by navigating menus, other applications come to the front rendering keyboard and mouse input useless. You don’t know this unless you lift the Rift headset. I ALT-TAB back to DCS and am able to Fly by pressing the Pause key. I might be missing a step here, but setting the game to Full Screen did not solve this issue. More research needed.

At this point you are greeted with what can be best described as brain candy, because the hereto before now “eye candy” expression becomes clearly inadequate. Not only does everything take on a 3 dimension visual presentation, but as @Chuck_Owl described in his Oculus article, the sense of scale and detail is spectacularly improved. Switching to an external view, I noticed that my TM Warthog is inop. Lifting the goggles again and ALT-TABing to TARGET, I see that the profile load is hung. By trail and error, I later determine that the TARGET profile needs to be loaded before the Oculus software. Go figure. While restarting everything, I took the opportunity to raise the pixel density setting to 1.5 on the DCS -> Settings -> VR tab, and turn on the mouse.

Next on the list of discoveries is that DCS sound will not come through the headset ear pieces unless you go into Windows Playback devices and set the Rift as the default.

With HOTAS problem solved and PD raised to 1.5, I finally get airborne in the Tiger II. Running down the Vegas strip I comprehend just how sense of scale and depth is created by having three dimensional objects passing in every direction. Never before have I felt so much like I was actually piloting an aircraft - except while actually piloting one.

Being very much a stick, rudder, and visuals kind of guy, the knee jerk - honeymoon starts now - gut reaction is that this is pretty spectacular and a seminal moment for simulations.

All is not perfect. Even with the PD increased, I am pretty sure that I am going to have my virtual butt handed to me when the shooting starts due to loss of resolution (especially at distance). Perhaps there is more to VR tuning than pixel density. Maybe an upgrade to my GTX 980. But as wonderful as the experience is, and I can’t see myself going back, distant objects are still fuzzy and cockpit gauges and labels can be hard to read in a normal sitting position.

Before calling it a night at 1:45AM, I take a spin in the Mirage and realize that not only am I enjoying the outstanding effort of the cockpit graphic artist, but that the HUD works pretty well in VR too. With a new appreciation of this aircraft I look forward to trying them all.

I think you should just stop now. Stop typing. Really.

In my experience mouse is generally superior, especially now that it can be constrained to the game window. I find trying to hover the crosshair over a switch using head look to maddeningly frustrating, and though you can map a mouse click on the hotas, that is valuable real estate I could otherwise be using.

I’ve found resolution isn’t too big of an issue with two caveats: merging with an all-aspect IR armed opponent and searching for ground targets. My biggest issue continues to be field of view.

The first can be mitigated with just making an effort to retain situational awareness and preemptively flare. The second, well, model enlargement I guess.

I think you should just stop now. Stop typing. Really.

I could probably be convinced to be without my Vive for a few months, question is how many Naval DCS module early accesses are you willing to spend?

The first like ten minutes are watching a JFK speech on a TV in a 1960s living room, and that’s as far as I got. Let me know how the LEM is.

The first like ten minutes are watching a JFK speech on a TV in a 1960s living room,

But is it a virtual ROOM where you can go get some cheese and crackers, go around the back of the TV and look at dust bunnies, try to see up your 60’s wife skirt…all that good stuff?

Not if you’re a sell out Rift user

that is a lot of tinkering just to get it to work. I get that it’s early tech, but it’s the kind of feedback that turns me off a purchase.

I do agree with that. When it becomes pretty much plug-and-play like TrackIR has become…I’ll be onboard. I’m already fighting enough battles with hardware. (Of course…put me in the headset for 5 minutes and I’ll be bolting to the store to buy one…so take my opinion with the attendant lack of experience…LOL…)

I spent a couple of hours doing a foundational rebuild of P3D to get rid of the tree problem that I was having. There is a mod for P3D that will allow the Rift and Vive to work with a time limited demo. I’m going to try it over the weekend to see how this looks with the sole purpose of beating down @BeachAV8R resolve 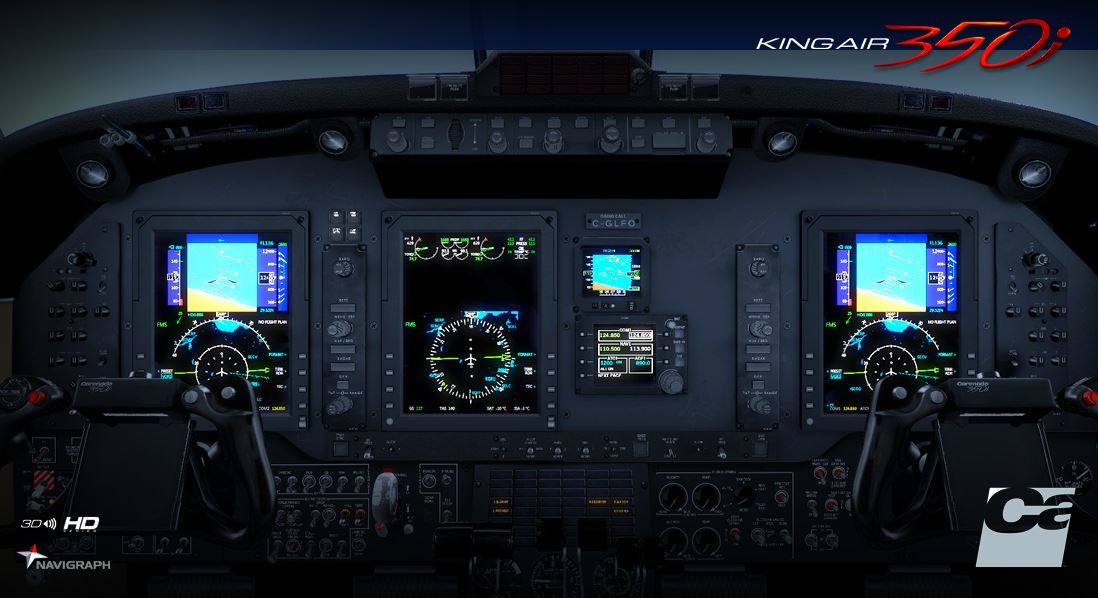 it’s magical. but it doesn’t work with tacpack. grumbles

Seriously though, I have never been so overawed by taking off a 737.

The setup really isn’t that bad. Setting up a HOTAS takes way more effort. Chipwich pulled it out the box at 11pm and despite a few issues, was up and running in DCS before 2am. So, let’s not put too much into the fact that you can’t just plug it in and be fully operational. If we were plug & play types, this would be a website about the PlayStation 4 or Xbox One

Chipwich, glad you got your Rift. I got mine at the end of April and it still blows me away every time I use it. I was using it to fly the Gazelle on the anti_tank instant action mission a couple of nights ago. It was simply amazing sneaking around using buildings for cover while trying to find a good position to attack from.

For me the killer argument is the resolution right now.
2000x2000 per eye should approximately be the target so you can actually see something.
Granted, the Rift (and even my GearVR with Samsung S7 that I am trying to get working with DCSW) will trick your brain to a certain degree and make you feel more “there”, and I can totally see how VR will be awesome in the future.
Still… It makes me angry if I can’t see stuff in VR that I can see without problems on my regular 1920x1080 screen. That makes the price too high for me.

Meanwhile I thank y’all VR users for your posts and for sharing your experience in general, and wish you lots of fun with it!

I manage switching my sound betweeen the Rift, my RoG headphones and my external speaker with Soundswitch. I wish it was automagic as in OSX but it’s still more simple than having to go through the Sound Manager.

Also from what I’ve read in the internetz I am happy with setting scale to 1.8. AFIK there is math behind that number that makes it better both than 1.5 and 2.0.

@ckount, good info. Ironically last night I had more or less settled on 1.8. Around Nellis in the M2000C I’m getting between 45 and 55 fps with my 980. I suppose that is abut half of what is theoretically needed, but useable.

Interesting post about flying a DCS mission start to finish in VR.

@ckount, good info. Ironically last night I had more or less settled on 1.8. Around Nellis in the M2000C I’m getting between 45 and 55 fps with my 980. I suppose that is abut half of what is theoretically needed, but useable.

45 is perfectly playable. There is some noticeable chop, but it’s not distracting enough to pull you out of the pit. When I start getting into the 30s and 20s is when it becomes unplayably disorienting.

Also I apologize if it seems like i’m hijacking your thread. I did a bunch of testing back when I got mine in April for an article that never saw the light of day. I’ve got all these opinions and no outlet! aarrrrrrrggggg

It seems the hardware/software magic interpolation of frames makes us feel as it mostly keeps a solid 90 fps even though the sim itself caps well below that when measuring. I’ve had stutters when flying sub-optimized modules such as the C101 and the Hawk but mostly (especially well coded/optimized modules) the interpolation handles the difference (and possible nausea and stutters) on my 980ti and i3770 with gusto.

Flew the Gazelle around Vegas a while, then took the Eagle out for a spin in the desert. With the added depth of field, flying closer to objects is a lot easier. Landing a helo is much more intuitive. Also, flying in formation feels very natural now. I chased down a Mudhen and flew in tight formation for a while. So easy to join up now. I just wish distance acuity was better.

Took this with Fraps, but I believe that it’s only grabbing the left eye view. Joining up…too bad the image can’t convey the 3 dimension feel of everything. The F-15C pit is quite nice in VR. 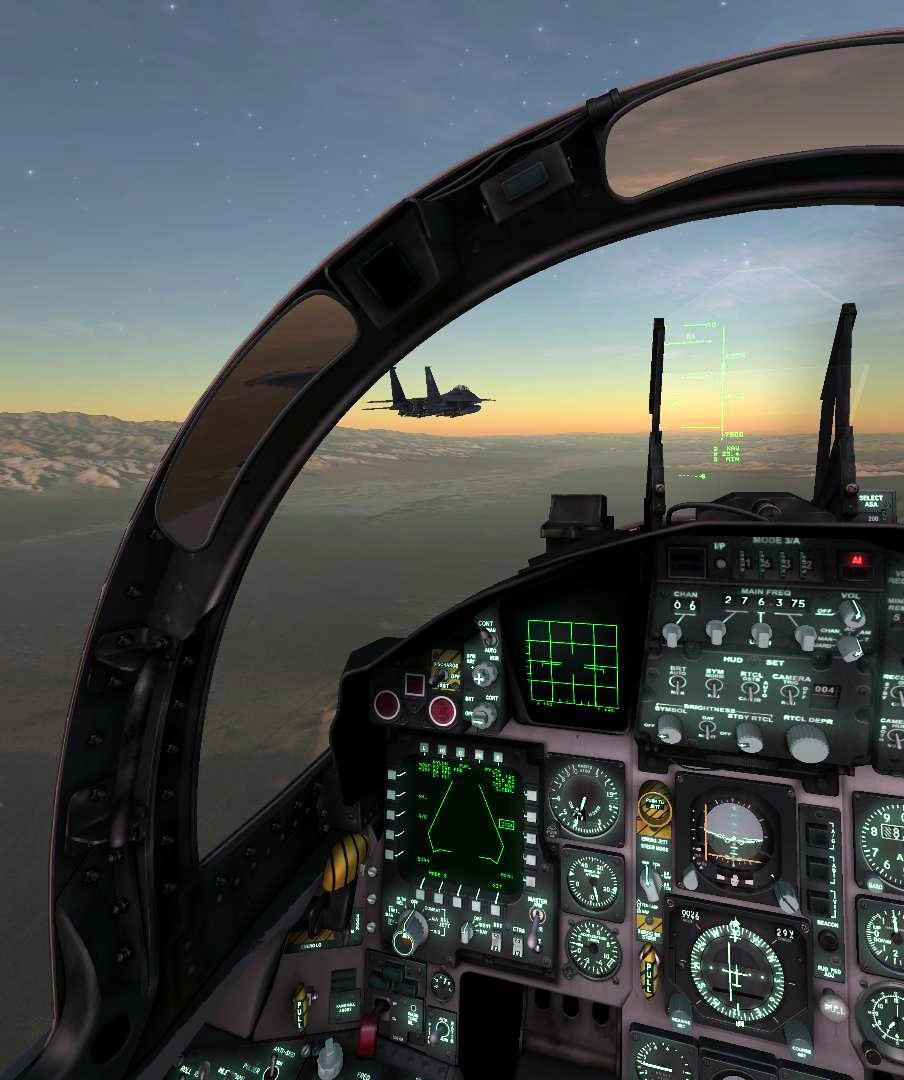 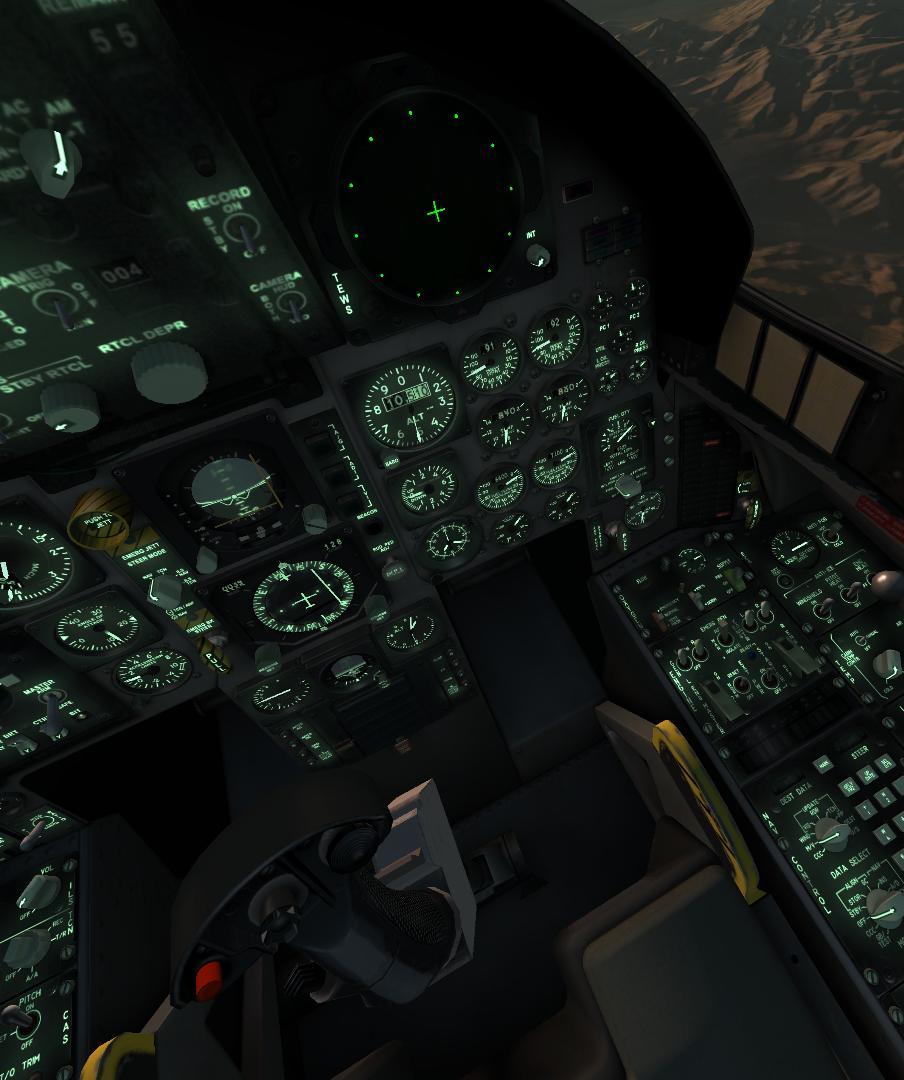 The F15 cockpit looks great in VR, but I have to say that the MiG 15 and MiG 21 cockpits are my favorites in the Rift so far. Mainly because they are both a cluttered mess ergonomically speaking, which looks awesome in VR