My journey with FlightGear

As undoubtedly many of you will know, FlightGear is a free open source simulator created and maintained by a cadre of volunteers. I have dabbled with FlightGear in the past, mostly on fresh Linux installation in an attempt to get that itch under control. I think we all have that, whether we think of taking up a lone Cessna 172 over the Serengeti plains or skipping along the top of the small shell that we live in in a X-15.

And I have given up countless times, either not being in the mood to tinker or bother with a new scheme of controls. Well, the time of giving up has gone. This is the time of getting things done with flightsimulators!

So without further ado, behold my journey through the wonderful world of Flightgear! 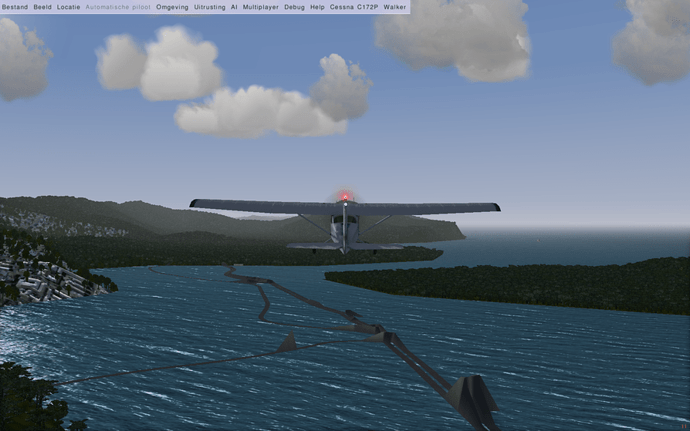 Okay, not such an smashing start, but given that the first 20 minutes were spend with a plane insta-crashing and a low framerate… Atleast now I am airborne.

Although, this brings us to the first issue that I need to fix, TerraSync, the utility that downloads the required scenery in the background seems to skip bits and bobs every now and then, and when it happens to be the runway… Well you are going to have a bad time. Atleast that was the situation for me at TNCM, but given that I loved flying in the Caribbean in Flightsimulator 2004 then it shouldn’t be too difficult to find a nice airport to wibble around with.

All of the screenshots presented here are taken around TIST.

Looks pretty good, although Anti-Aliasing doesn’t seem to work in-game, it does work in the screenshots! 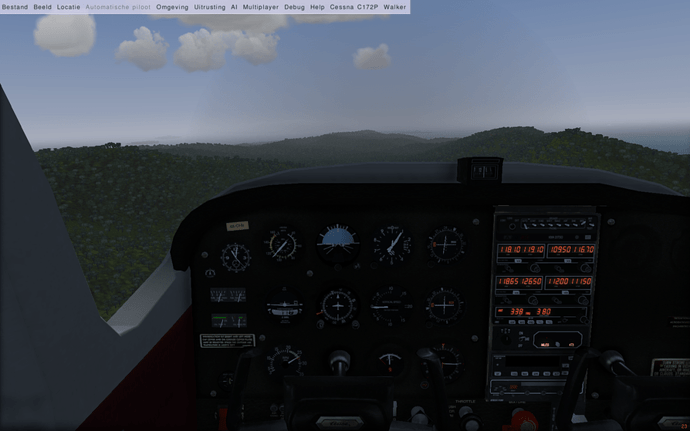 yeah okay, the auto-generated scenery doesn’t quite do it for me just yet: 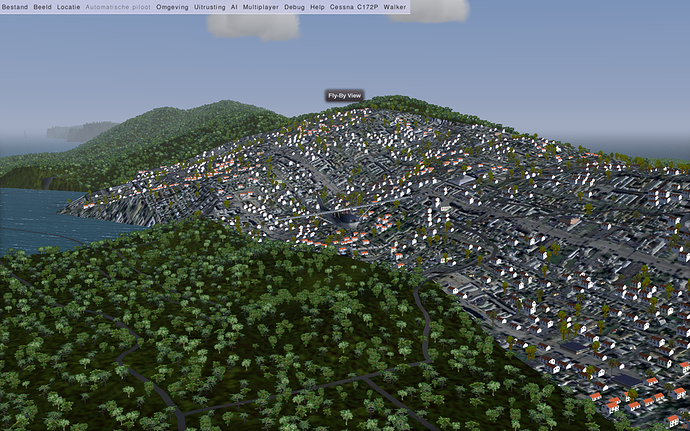 The cessna looks nice though, according to the aircraft repository it’s quite complete. 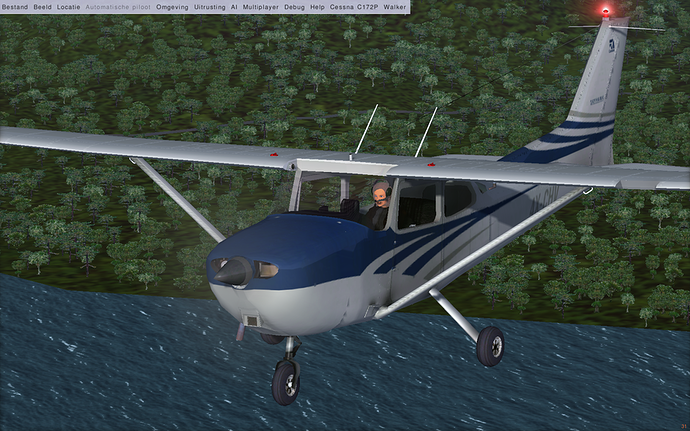 It has a damage model, selecting liveries on the fly, and a fully interactive cockpit. I would say that it’s about on-par with the Flightsimulator 2004 model visually, short of the smaller details in the cockpit. 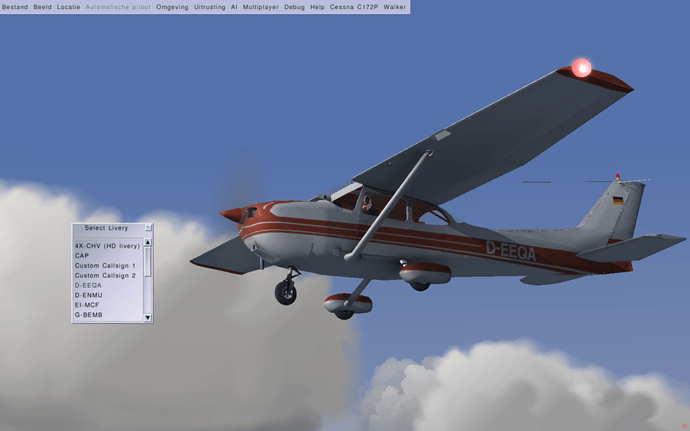 I settled for a KLM livery, mid air! 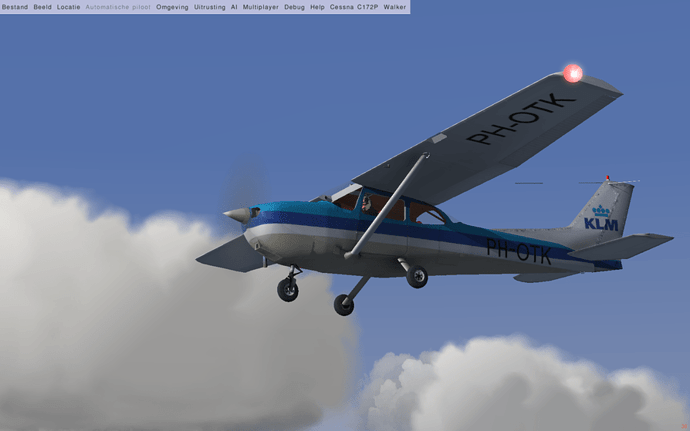 Oh look, I can make the clouds look prettier! They cast shadows?(Did not see this work so far). 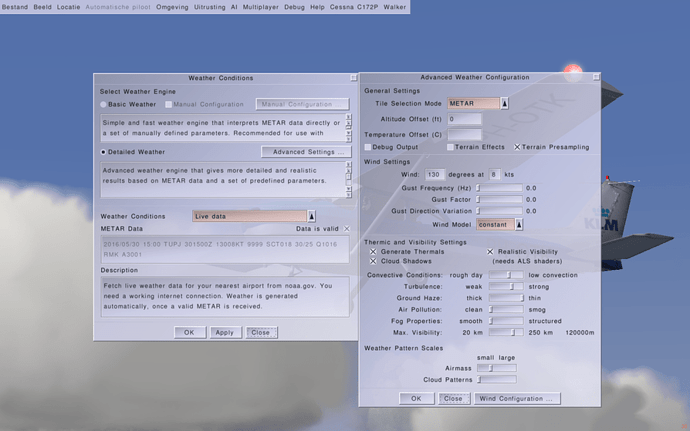 Just a little note, my menu was flicking like crazy so I had to comment out 2 lines in the preferences.xml, honestly that doesn’t bother me since any simulator is a ton of tinkering.

At this point I had most of the controls configured. Unfortunately I cannot do anything like axis smoothing, curves, saturation etc. Pretty much what you actually would expect from a modern simulator. The menu options also are not quite as streamlined as expected(Then again, Microsoft series also puts stuff all over the place…), which I think would be quite attractive after some work. 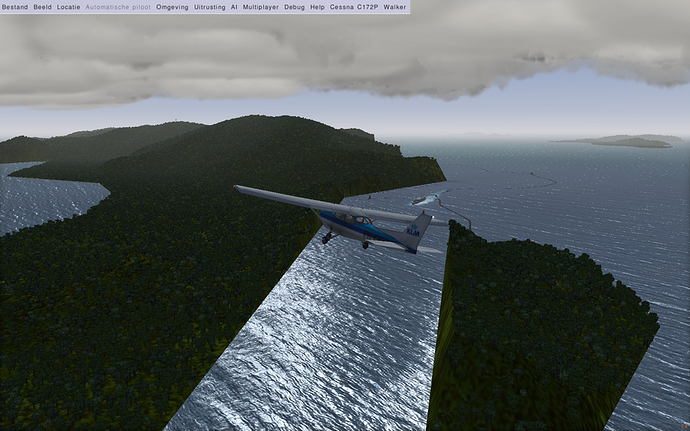 A ship bravely goes where no ship should go, atleast according to the real world.

See the island just in front? I changed some of the scenery texture settings(region specific, global, global alternative[DDS]). That screenshot was with the default region specific settings. The following are global and global DDS. 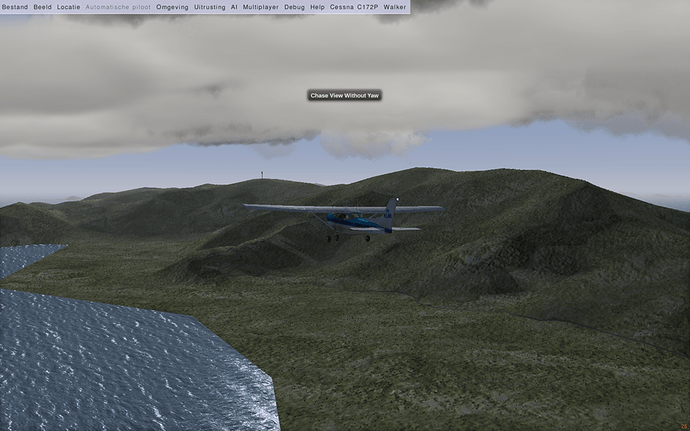 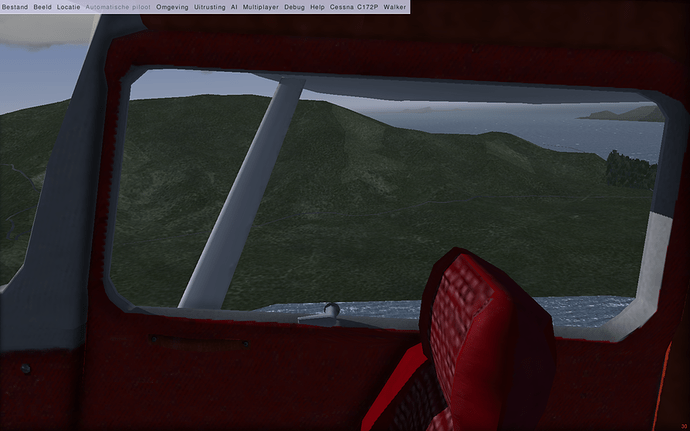 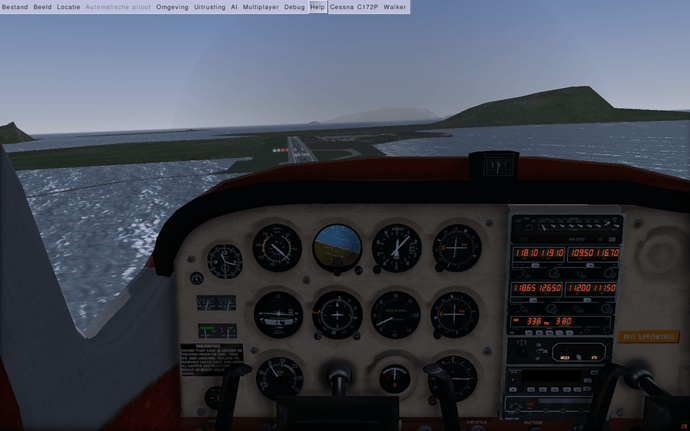 Shgrt final to my favourite airport that is close to TIST. The airplane did some heavy pitching even though I only really adjusted pitch with trim, I think it was the turbulent wind that was also putting me off to the side. Note that the cockpit textures also changed with the livery, nice details! I didn’t use flaps for the approach, and I think that the ground effect helped me tremendously when settling the plane down and getting her straight and lined up. I wasn’t using any flaps so came in a little fast but damn the response felt good! 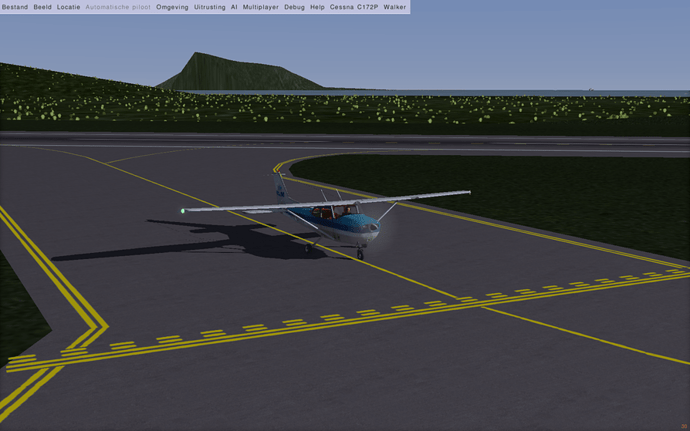 It’s a bit barren though… Then again, so is 2004 and FSX in many regards. It is visually less appealing? I am not so sure. It could use a little touch up here and there but I didn’t feel annoyed by the visuals.

So what is up next? I’ll need to sort out the AA issues and control sensitivity. Both Saitek and Thrustmaster allow me to configure the controls in external software so I should be good, same goes for the AA.

I’ll probably have to revisit this area in default FSX, 2004 and FlightGear. The scenery downloader will get a little kick in the butt! Perhaps I’ll do a quick tour of the “show off” scenery though, they are currently voting for a new location and now is a good of a time as ever to have a look myself!

If you need something to watch on a secondary monitor put this up, it’s an IFR flight in FG. I think it’s impressive: Nice AAR - it has been quite a while since I had a look at Flight Gear and it’s great it’s doing ok.

Quick link for anyone looking:

I am such an idiot for not linking to the website… Thanks Frog!

The F-14A variant has been added, making use of all recent rendering improvements and including a simulation of compressor stall. Lots of work have also gone into making the F-15 yet better – it now offers C and D variant, operational weapons and radar, detailed sound and simulation of hydraulical, electrical and ECS pressurization system.