Yes, they definitely should have waited for Prime Day. Definitely an item you’d want free shipping on.

Got a reality check on that… and you wouldn’t believe how idiotic all is. 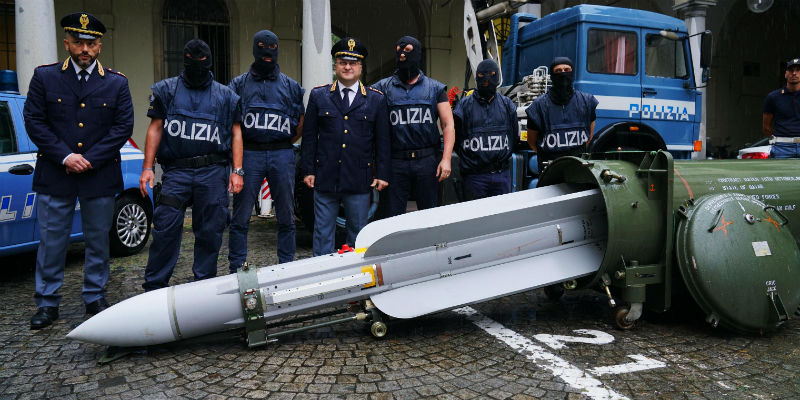 but TLDR in English:

the missile certainly wasn’t going to be used to kill Salvini (as Salvini Claimed- that idiot, I might add) and, in all probability, could not kill anyone.
The warhead had been removed, and as others noted is an Air to Air Matra missile- useless without a fighter plane.
Beside that, it was not in the hands of a group of neo-Nazis or other extremists, but instead changed hands between a series of Italian and Swiss entrepreneurs.
The last of whom entrusted the sale to a former Forza Nuova (kind of extremist Right Wing Party) candidate with neo-Nazi sympathies who, among the others tried to sell it to another group of extremists

These, who had fought alongside the Ukrainian government and against the pro-Russian militias of eastern Ukraine, refused to make the purchase.

It remains to be clarified how and from where the missile arrived in Italy.

I was there to witness that in all its blue camo fiery glory. It was fabulous

That camo is brilliant, I agree!

I like how it sounds like they couldn’t pick a winner so the SU-27 gets “best solo jet” and the Hornet gets “best individual display”.

Technically not the same I know, but close enough!

I was there to witness that in all its blue camo fiery glory. It was fabulous

Oh I wish I could have been there with you. At the airshows I get to go to, I get to see the usual US aircraft which I’m very glad to see but I have never seen any Mig-29, Su-27 or Mig-21 at any airshow I’ve been at.

It really is the highlight of my year. There is few places in the world where you can watch a display by a mig21 Lancer, followed by a hornet, followed by a Spartan and a flanker

It really is a special place for me. I always moan about how expensive tickets are these days but I always go and it’s always fantastic. The static displays are worth it on its own this year. You could go inside so many planes and meet the crews. As I took my 2 year old boy with me that sort of thing MAKES memories.

Saw this one and couldn’t help but post it. ED did a pretty good job.

I think this might have been posted here a while back but I just ran into it and thought it was too good to leave it be.

God I want that machine in DCS so bad!

Those Phantoms are beastly looking aircraft.

Gorgeous beast mothers. Look at those paint jobs! Remember when painting model aircraft you needed more than just ten shades of grey? Look at them! Blue on blue camo! sweet! I’m afraid the F-35 will be grey for the Japanese as well, won’t it?

Those things look heavy and powerful and fast. I bet I will be defensive like a little b*** in that monster all the time in BFM.