Anyone? Suddenly it started spiking and makes flying…challenging. I took it apart, did minor cleaning, but that didnt stop spiking.

How to fix Logitech G940 rudder spikes/noise - Hardware and Controllers

How to fix Logitech G940 rudder spikes/noise - posted in Hardware and Controllers: I thought Id post a bit of info about how I just repaired my G940. I know a lot of people have the problem that after a time their G940 develops spikes or noise in one...

Does that work? If not, take out the pot and measure the resistance. Tons of websites sell all sorts of pots, you can probably go with a cheapish pot.

If you have the budget I recommend dumping them and upgrade to something better. I prefer Crosswind.

I opened my G940 pedals which spiked out of the box. The potentiometers seems to have a custom shaft which makes sourcing difficult. Best bet would probably taking the poti to a local old school electronics store (the sort of store that sells 30 models of soldering irons). Good luck.

Where do you still have those stores? I doubt they can be found still in most western countries.

We have them in Tucson! Love 'em.

I wanted to ask, but I didnt, but this post gave me the courage

Guys, do anyone know replacement pots for MS Sidewinder Precision 2 ? Or at least what parameters are these pots? I guess these are the same pots as in MS FF 2

If I remember correctly Sidewinder sticks use some sort of optical sensor for their main axis. So no pots…

If you have the budget I recommend dumping them and upgrade to something better. I prefer Crosswind.

I opened my G940 pedals which spiked out of the box. The potentiometers seems to have a custom shaft which makes sourcing difficult. Best bet would probably taking the poti to a local old school electronics store (the sort of store that sells 30 models of soldering irons). Good luck.

I’ll take anything that can be shipped overseas without much (preferably any) modifications. There are no electronic shops here that can do this. Is there a part number that is sold on amazon or such? What is crosswind?

I replaced the pedals with Saitek Pro Combat ones after the tie brakes started failing.
Haven’t regretted it.

Temporarily out of stock.

Simulators enthusiasts are ignored by big manufacturing companies. No FF anywhere on the horizon…nothing new coming out. Grrr

Yes, this was the case with older Sidewinders.

The Precision Pro 2 had reintroduced potentiometers to save money and thus their lifetime was limited to wear and tear of the potentiometers.

To Toe or Not To Toe, that is the question!

The first decision point is if you need toe-brakes or not (and I’m guessing you do, what with the flying and all), and then a question of how much to spend.

A crosswind is any wind that has a perpendicular component to the line or direction of travel. This affects the aerodynamics of many forms of transport. Moving non-parallel to the wind's direction creates a crosswind component on the object and thus increasing the apparent wind on the object; such use of cross wind travel is used to advantage by sailing craft, kiteboarding craft, power kiting, etc. On the other side, crosswind moves the path of vehicles sideways and can be a hazard. When winds a...

A bit too reach for my blood. Saitek Pro Combat will have to do…

Let me give some “insights” about the potentiometer replacement problem.

Pot resistance is not too important, you can use 10 to 100k. USB controllers don’t use resistance but VOLTAGE VARIATION, more bellow.

Are plenty of good pot around, Alps, Bourns, Spectrol… with ceramic or plastic trail and not carbon layer from cheap models, some rated to 10M cycles - joystick/gamepad industry use 10.000 cycles ones.

So is just matter to replace the pot with better one, wright?

Besides the fact that you need a new pot with same physical size, same axis diameter, same D recess position… to avoid mechanical adaptations, the BIG PROBLEM is:

Pot’ used in joystick is different from ordinary pot in one detail - related to above mentioned voltage variation.
Their resistive trail is limited to work in a range typical from 30 do 60 degrees (varies from models), is the called “electric effective angle” or “electric angle” in some pot datasheet.
Example - from datasheet of pot F10KV used in Saitek’s pedals (that can be used in Logitech pedal - if find one):

Because since USB controllers use voltage variation and not resistance for position reference, joystick pot’ need do this variation in the same range of joysticks movement, in the 30-60 degrees range.
Typically this voltage variation is 0 to 3.3 - 5 volts in joystick USB controllers.
3.3 used is used in cheap circuits (e.g. Saitek) as way to reduce electric noise instead use better components (resistor and condenser that cost 0.0x$ in quantity).

99.9% of potentiometer available in electronic stores has their “electric angle” set for 270 ~300 or more degrees.
So one don’t find “joystick” pot in electronic stores, this issue affect too R/C transmitter, go to R/C models forum and will see people with the same dilemma.

But if replace the pedal with 270 degrees “electric angle” pot, don’t work?

Work, but the voltage will not vary from 0 to 3,3 or 5v, will vary in same proportion of angle reduction and will cause that USB controller resolution - the “infamous” BIT will be reduced in same way, resulting less than in obsolete (8 bits - 256 “steps”) CH USB controller.

Possible solution for this? Yes:

Example in G-940 rudder pot with TLE50x - since this sensor work in digital BUS is only compatible with Arduino+MMJoy2 - this pedal now work standalone. 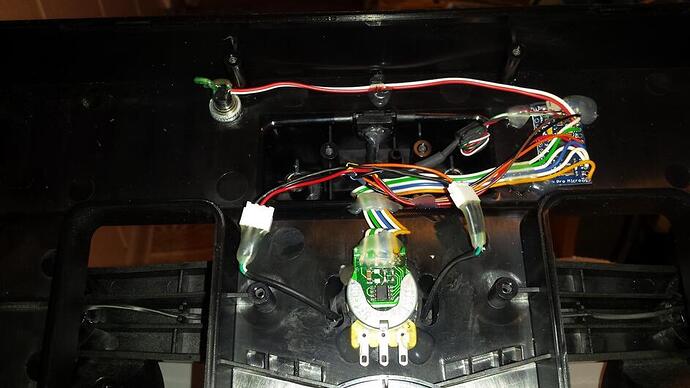 KMZ41 sensor work in analog BUS and can be wired like a pot.

. A good option, not too cheap like the above but not too expensive: replace the pot with Bi-Tech 6120 HALL sensor - pay attention in "electric angle and don’t get the wrong model.

Will be need some change in axis placement, but is wired like a conventional pot.

. Use all above difficulties as excuse for you BOSS (wife) for buy a “Next Gen” pedal:
VKB T-Rudder (British brakes only, no “Joe brakes”), MFG Crosswind, Slaw Viper.

Love the detailed explanation and pics, @1lokos! Thank you!