I just started building a Hasegawa 1/72 F/A-18C that I picked up last fall. One of the sets of decals included with the model is VMFA 232 “Red Devils”, which are based out of Miramar MCAS just down the road from where I live, so that will be the squadron I’m modeling. I’m looking for suggestions on fun and prototypical (for this squadron) A/G loadouts.

I’m not 100% sure, but I believe both the pods needed to be mounted to designate targets and pick up the laser to guide bombs to said target, correct?

I think the laser/designator pods in the kits are the going to dictate what time period and possible conflicts this model would have served in. Can any guru’s tell me what that would be?

And then finally, based on that, what would typical A/G loadouts for a USMC squadron have looked like?

I was thinking of just going 2x AIM-9’s, 3x Fuel Tanks, both pods, and then putting a single GBU-12 on each wing (this is the loadout you see a lot of in pictures of this model on the internet). Or, I was thinking of using the double bomb racks for 4x MK83s, but then would the pods still have been mounted? Again, depending on what time period this would be in, I’m not sure if they were still using dumb bombs and using the fuselage stations for sparrows, or if they would always have the pods mounted even with dumb bombs, or if they would only mount the pods with GBU’s loaded.

And lastly, not sure if, based on the time frame for this model, asymmetrical loadouts were in play, or if that if a newer thing…

Your input is appreciated! Thanks.

The only thing I generally mount on aircraft now are the drop tanks, since that’s what you most commonly see on the hardpoints.

A GBU-16 on one end and a 500pounder JDAM on the other end is what I would do, just because it’s an interesting loadout.

The only thing I generally mount on aircraft now are the drop tanks, since that’s what you most commonly see on the hardpoints.

Just for that, I’m eliminating drop tanks all together and hanging as many MK83s from the plane as I can!

A GBU-16 on one end and a 500pounder JDAM on the other end is what I would do, just because it’s an interesting loadout.

Were they using JDAMs at the same time they were still using the older targeting pods that came with the kit? If so, that would be a fun loadout, providing I can get find the right weapons in 1/72.

Got a point there. Ok, full on SPAMRAAM config then XD

Although all that assymetrical-ness might get to me when Im looking at it on my desk.

So one constraint I need to work around… After market weapons come in different sets, and from what I’ve found so far, I’d need to purchase 3 different sets to get the combination of MK83 (come in sets of dumb bombs), MK20 (included in a set with LGBs), and the AGM-65 (comes in a set with AG missiles). At about $10 each, that’s another $30!

So I may have to narrow the field down…

You can narrow the above down to Mk83s in place of the Mk20s or go with 5 Mk83s and 2 tanks, then replace the LST with another AIM-7.

So in DCS, you can load 2xGBU-12’s per pylon via the BRU-33. However, when I search the internet, I see a lot of lengthy forum discussions on this topic with some debate about if it’s possible (interestingly, a lot of the discussion is on the DCS forums). Was this possible on USMC F-18A+/C in the late 90’s/early 2000’s?

Here’s my progress to date. Most of the cockpit painting and assembly done, and the big pieces of the exterior assembled and sprayed.

I have it next to my “Snaptite” A-10, just to contrast how much better the F-18 looks using Testors spray cans, vs the brushed on acrylic paint I used on the A-10.

Pretty sure it was, just not regularly used/needed. Gets draggy real quick.

This is an F/A-18D and probably a bit later, but close enough: 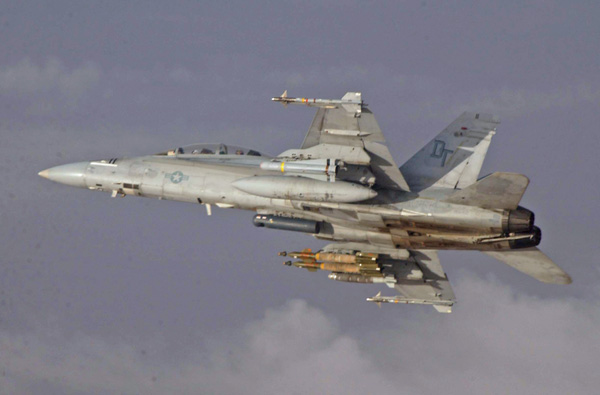 (Sorry for the poor picture)

Do you have a specific era in mind? I’ve got this pic of the Red Devils in ODS:

The guy in the back appears to have the 5x bombs config that Franze mentioned. I can’t tell the difference between Mk82s and Mk83s when loaded on a jet

Do you have a specific era in mind?

Well, the paperwork with the model states it’s modeling an aircraft from 1996. And I also found the photo below, which is of the same actual aircraft depicted by the model, and the picture is also dated 1996.

So I’m going to stick with sometime around then. I read that in ODS, they didn’t have many of the -38 and -173 pods available, and I think I’m going to put both of those on the model.

So - something mid to late 90’s, with both pods mounted.

In the image in the above post, you can see (what I believe is) is the UHF/VHF antenna on the spine of the aircraft (painted white). My model kit came with two options for this; one that is kind of squared of like in the picture above, and one that is swept back. From what I can tell from some google searches, the swept antenna was part of an upgrade at some point. I wasn’t paying attention when I was building and I have the swept antenna on my model, even though the directions (very un-clearly) call for the rectangular one if you are building the USMC version). Does anyone know when USMC (or VMFA 232 specifically) would have received these antenna upgrades?

I’m trying to figure out if that upgrade fits with the markings and armament I’ve chosen, or if I should try to put the rectangular one on instead for accuracy.

Man… no takers on my antenna question? I thought for sure someone would jump in with the full history of every antenna on the F/A-18 for each branch of service…

Trying to find info on antennas is pretty deep for a lot of us!

All I can find is that the newer swept back antennas were introduced to the A+ and later C versions.

I’ve been digging around as well, not having a whole lotta luck.

Mid-late 90s seems to be a time period from which they changed from straight to swept antennas, according to this:

“The UHF/IFF antenna on the spine and UHF/TACAN near the nose gear initially straight. In the summer of 1997, both of these were changed to the longer sweptback style. (Photos from June 1997 show the early IFF antenna and later TACAN antenna.) The change was made after the crewname went to the later style.”