This is well written article (no surprise - AW&ST is the industry leader for well done news in my opinion). It examines some of the ins and outs of crosswind landing techniques, specifically looking at larger aircraft limitations. I found the part about the G-V very interesting because of the radical amount of wing-sweep that further reduces the margin of a wingtip strike as deck angle is increased during the flare. I’d love to see a similar mathematical analysis done on the Citation X, which has a phenomenal amount of wing sweep. 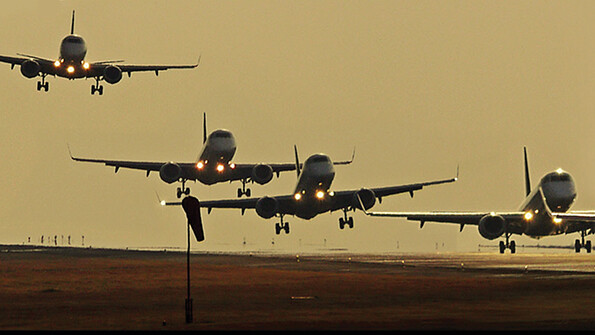 As pilots we learn to deal with crosswind landings almost from Day One of our training. Chances are this was in a primary flight trainer that weighed less than your car and was accomplished with what some call the “wing low” method, something more...

Using this highly detailed drawing, and my mad powerpoint drafting skillz, I come up with the following dimensions:

Doing maths, I get a 12.5 degree clearance from wheel to wingtip, when level on ground. that gives lots of additional clearance over the 7 degrees shown for the GS 5.

With a 5 degree flare (do you have a better pitch angle to use for a CitX at touchdown?), I get a 54.75 inch clearance to the wingtip, which is still a nice 9.8 degrees bank angle before it strikes, compared to the 5 degrees on the GS 5.

The wings on that Cit X sure have quite a sweep, but the wingtips are actually further forward towards the gear in the CitX ( 180.25 inches) compared to the GS 5 (202 inches), which helps. The biggest factor is the lateral distance, though - the distance out from the wheels to the wingtip is much larger on the GS 5 (470 inches) than the Cit X (317.5 inches).

Einstein has a grasp on the maths.

See, that is what separates an engineer from a non-engineer. I didn’t recognize that the root of the X wing sits so much further forward of that wheel rotation point. Nicely explained!

Pretty amazing that the 737-800 only has 18" of nacelle clearance when sitting on the ramp!