Didn’t kegetys shader mod for DCS do something similar…?

Edit. Yes, apparently with a mask of sorts…

MSAA is applied only on the middle area of view

It did, or rather it used a fixed MSAA circular mask to try to reduce the overhead of any antialiasing. DCS uses it’s own custom MSAA shader, as they can’t take advantage of the driver since they use deferred rendering (I think, anyway, not looked properly). It’s why MSAA on DCS is not ideal in terms of the performance cost curve.

as it expands/contracts and uses an AI algorithm to apply the MSAA, which is why it is RTX cards only - it’s using the Turing Tensor Cores as co-processors to do it.

As only an engineer can truly do naming terms this bad, the name of the new Nvidia VR features is not ideal. There is also Variable Rate Shading (VRS) that uses the AI and is all about supersampling and resolution, and is designed around future foveated rendering (so it essentially applies a higher sampling resolution on where you are looking, letting the periphery be a lower resolution where you can’t see as well) and then this is this Variable Rate SuperSampling (VRSS), which is really about MSAA and antialiasing techniques.

I guess one way to say it is VRS is what we need, as in high resolution sampling based on where the eye is focused on, while this VRSS is just a way to get free smoothing to make things look nice, but doesn’t get more ‘info’ from the app to show a more detailed image. For VRS we’d need an eye tracker, so still not in our cheap headsets but probably next gen.

ED doesnt typically support Vender Specific Functions.
Whether it be GameWorks or GPUOpen.

DCS is Moving to Vulkan from DX11 anyway, so all the DirectX single thread processing overhead will be gone.

The titles aren’t altered for VRSS to work, they just need to use forward rendering and MSAA.

nVidia is still using a DX9.0B profile for anything DCS.

Why is that btw? Did they never acknowledge DCS 2.5?

no Clue, they never acknowledged anything after Blackshark.
Niether has AMD for that matter. 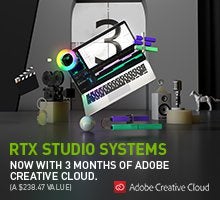 r/SteamVR - VRS (Variable Rate Shading) : How to enable it on custom Games...

Do you have any before/after shots or have you tried it?

I’m hoping someone posts some results in DCS as well. I’m not entirely sure what to look for once I enable it. Crank up MSAA to 4x? Turn it off?

Looks like someone beat us to it. Apparently it works but the AA is applied outside the center view of focus, opposite of what it’s supposed to do.

For science, I’ve tried this in DCS, and it sort of works… in reverse. The centre of the image is heavily aliased, and the periphery has anti-aliasing.

Still, a glimmer of hope.
`

I just tested it with the reverb and confirm what was reported. AA only gets applied around outside edge of the view but not in the center. Maybe it’ll get improved in later driver versions.

Looks like someone beat us to it. Apparently it works but the AA is applied outside the center view of focus, opposite of what it’s supposed to do.

Awesome mod for those that use their periphery to detect motion…

Using that guide above, and in the Inspector app, where do I find:

They mean press the button next to the driver version field, which brings up the Profile Inspector. Then find the Black Shark profile and edit that. 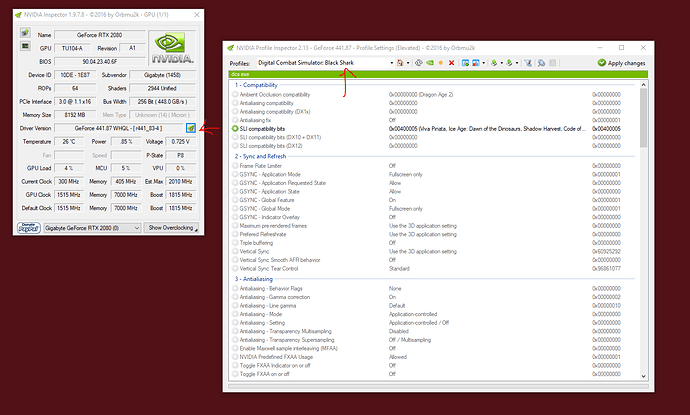 Btw, you know this does the opposite of what we want so far, as in makes the center blurry and the outside mask sharper? Also, it can’t be set to ‘Adaptive’, just to ‘always on’, so without that it actually costs more FPS than being off. Just wanted to check.

Yep, am aware of it being ‘opposite’. Just wanted to try it for myself and tinker.

Scroll down. I don’t know if they need a RTX card to show, so if they are missing that might be why? 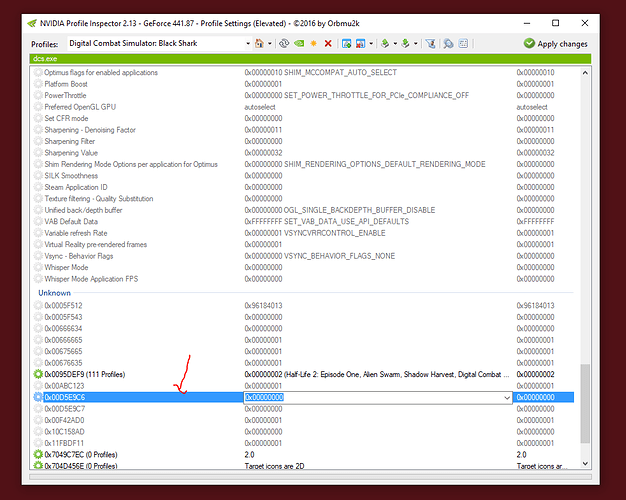 2080 Ti RTX here … Interesting. Under DCS, my Unknown list doesn’t match yours and lists only 5 items. But my Undefined list goes on forever.