The new Oculus Beta allows for turning off the Home graphics, freeing up some much needed performance.

I noticed an increase in FPS…

That’s really interesting. Reinstalling my rift is next on my list to see if I can get some decent performance now I’ve formatted and reinstalled everything

Good, Home has caused me so many issues.

But I just bought a new vase…

I specically hate how I modded my setup, and Rift Home Launches first and throws me error dialogs that I cannot dismiss, even when launching DCS or any VR sim directly.

while it fixed the issue w/ messages I cannot dismiss, even when I launch an App in VR Mode, it launches Home w/ it as well for me.

it launches Home w/ it as well for me

With the 3D graphics…?
It launches the Oculus software and menues, but the 3D home view is just a grey void with a black mesh, for me now.

if I launch DCS Directly, It launches the Oculus Software w/ the Empty White 3D Space w/ the Menus, then DCS Ends up behind that, I have to close DCS and Relaunch to bring it to the front.

allows for turning off the Home graphics

For anyone on the SteamVR side the beta channel has this checkbox, and similarly helps load times and performance: 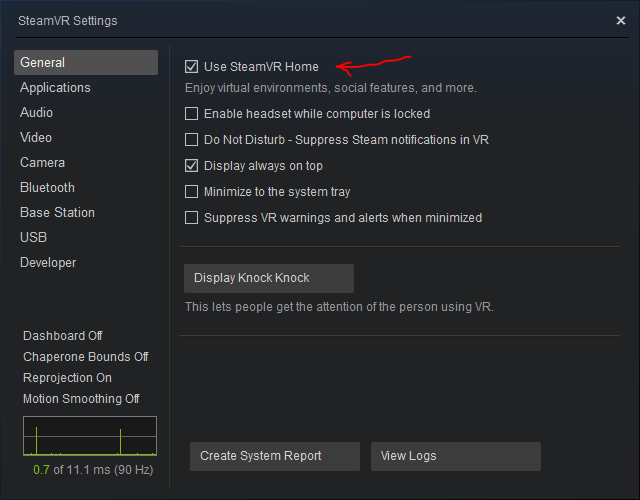 Just tick it off to not bother loading your skeuomorphic real-estate.

Forgive me for mentioning this multiple times. But just in case anyone following is new to Oculus, I have enjoyed dramatic improvement in X-Plane by using the Oculus Debug Tool to turn ASW off. I do this with X-Plane only. The improvement is not at all subtle. If I have ASW on, the effect is almost as if I have two instances of the game active simultaneously. This doesn’t work for everyone, I know. But it takes just seconds to try.

I turned ASW off using an X-plane plugin, and it did improve performance. A bit. Sadly not enough to make the simulation fun to play for me.