If that had said Dev 2.5 on the bottom I might have lost it 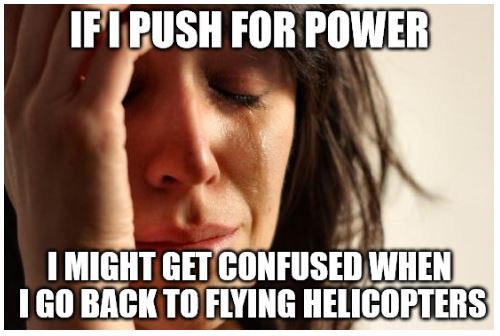 But … if you pushed for power to start with, then you would already be trained in the dark side of the force

Hey, that manual was my leverage to curry favor.

Most definitely will…although at the moment I’m attempting the Cold and Dark Challenge…I mean, what could go wrong?

Is it odd that this topic doesn’t have a category? Or is that just me.

Or is that just me.

I mean, what could go wrong?

It’s alive…!! OK…so cold & dark with no guidance didn’t get me anywhere. I mean, I got the electrical power on, but I missed some switches and toggle thingies and couldn’t seem to find the right combo of stuff to get the engine running. So I used the old June RAZBAM video to help me through…

TACAN in Nevada has been a bit squirrelly in general the last few patches. Might not be be the the jet.

Love the clarity of the HUD. I do see one kind of line artifact out in front of my plane - you can sort of see it running across the screen there. Not sure if that is a shadows thing or one of my sim settings causing that. It moves with the aircraft…I think it might be a landing light shadow artifact or something…

So I went with a 40 degree nozzle setting for a Short Take Off (STO). I think there is a manual or something (some Performance Manual according to the flight manual) that gives the weights, nozzle setting, and probably speeds and stuff. I wagged it…40 degree nozzle, put in full power and just sort of left the controls a bit neutral. I had 11,200 lbs. of fuel showing on the gauge. At around 120 knots I started to get antsy and fed in a touch of back stick…and at around 135 she popped off aggressively…I almost started a PIO but it settled in. And I’m off…(I’m pausing the sim to write this…)

By the way - I’m using my RH throttle of my Warthog HOTAS as my throttle and the LH as my nozzle angle even though they are sort of reversed in the cockpit (the nozzle selector is inboard of the throttle). However, since the RH throttle on the Warthog has all the buttons, it makes more sense to use that as the throttle. It feels pretty good that way…although some might choose to use the friction INCR/DECR axis I suppose…

…and around the pattern we go. Nozzle to zero and accelerated to around 300 knots, pulled the power back to 92.6 (RPM?)… Not sure what the G limit is with the external tanks. Just flying the upwind we’ve burned down to 10,900 lbs…

On a level downwind (mighta shoulda done a right downwind perhaps…noisy little beast and all…) power back to around 55.4% maintaining 300 knots… Planning on a 40 degree nozzle landing since I sorta know the speed at which she flies there (130-ish…maybe slower)…

Flew out to about a four mile base to final turn to give me some working room to get settled in on final. Started the base turn at 300 knots, moved the nozzle to 40 degrees and there was no real radical pitch or anything…just some gradual lift and then some speed decay. Don’t know what the gear extension speed is…so I wagged it and dropped it in the base turn at 250 knots. That stuff is super draggy (and I guess the speed brake somewhat extends as you drop the gear?) (and I have flaps in CRUISE…that might be wrong) and speed decayed over the span of about five seconds from 250 to 170…so you have to be ready to come back in with substantial power after the gear goes out…

Very speed sensitive machine…and seems to want to go to the back side of the power curve if you aren’t careful. Slowed to 160 with about 500 FPM down requiring around 98 to 102% power. If you let the speed decay much more at this weight and nozzle setting, you really have to get back in the power as the speed starts to decay a bit faster. Like I said, probably very heavy with 10,600 lbs. of fuel remaining…I’m sure it is much more sprightly with just a couple thousand pounds of gas.