Friendly forces learned that there was a plan by terrorists dressed like Santa to deliver horrible gifts to children at an orphanage. These gifts consist of poisoned candy, whoopy cushions, scary remote control spiders. These Bad Santas must be stopped.

A plan was devised to eliminate the bad Santas and to destroy the mean gifts. 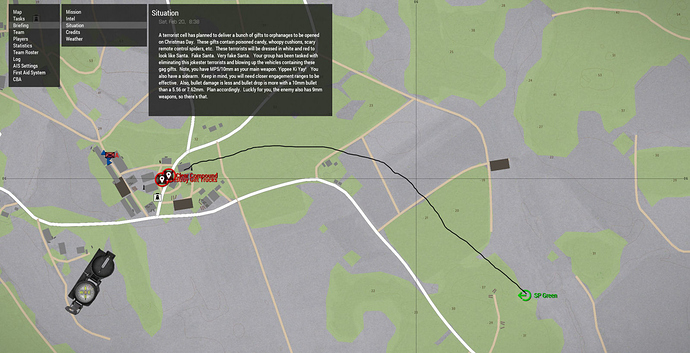 As this is Christmas time, we decided to kit ourselves out with MP5s.

From our initial start location, we proceeded through the snowy woods and farmland, occasionally running into bad guys.

We finally reached the outer perimeter of our objective.

As we entered the perimeter, the resistance increased, as expected.

Now the cleansing operation has begun in earnest and we encountered our first armed vehicle. It was dispatched without issue.

After most of the outside bad Santas were eliminated, the team cleared each of the buildings, eliminating resistance and finding the gift trucks to blow up.