Well, after years with my X56 I’ve finally decided to try something higher-end.
Winwing just came out with a less pricey version of their massive pit units, the Orion. It’s comparable to the Warthog except it’s closer to the F/A-18 on the throttle side (and the stick is the Hornet’s, so it’s still different from a WH with the Hornet grip).
https://wwsimstore.com/p/324.html

Shipping to me was $80 and the set was $500 right now (although they will increase to $650 at a later date). So not only was it in stock and NOT overpriced (like I think it’s $550+ for a WH now if you can even find one) but it was actually discounted.

The reviews I’ve seen so far indicate that this should work well for me as long as I don’t overuse that mark button that has actually been made into a hat (unlike the WH’s Hornet grip where it’s a button and there’s an extra wheel next to it) since some have reported it can feel flimsy and possibly pop off. I’ve been getting by with 3 hats on my X56 stick so I think I won’t need 4 on this one. Especially as the throttle has what looks to me to be a better layout than my X56 with those overlapping hats below the range knobs.

That looks pretty fancy, so would love to see a mini review or pics when it turns up @JediMaster

I’ve been looking at their modular throttle…
Do let us know what you think!

Congrats JediMaster. That should be quite and upgrade to the X56. I’ll triple the request for a mini review. Would be good to hear an unbiased opinion.

Awesome! I’m seriously eyeing their Taurus throttle, very close to pulling the trigger on it for an F/A-18C sim pit build. My Warthog is getting ‘loose’ side-to-side. It doesn’t really bother me when playing, but I worry it will get worse…

So…I already got the stick! And half the throttle. Each part comes in 2 boxes, base and grip. The grip of the throttle oddly is across the country in Indiana, while the other 3 boxes are here right now. Sounds like a bad math problem, 4 boxes leave China at the same time and 3 go to Florida while 1 makes a left turn at Albuquerque and winds up in Indiana…

Went to the site to check the tracking numbers and as I did I noticed the Orion is now listed as “out of stock” so I really am glad I pulled the trigger when I did! Speaking of triggers, the 2nd stage on the stick is a little unusual as others have noticed, but I don’t see it being an issue.

the Orion is now listed as “out of stock”

In stock again now though.
Are the Throttle dependent of the stick, or can it be used as a stand alone unit. I want the throttle, but not the stick…

Speaking of triggers, the 2nd stage on the stick is a little unusual as others have noticed

Edit. No, out of stock. Restock on April 10.
Not sure about their webshop. It showed that it was in stock and then I hit the store to see if they sold the units separately, and it changed to out of stock.
I guess they do small batch production, like VPC and VKB. 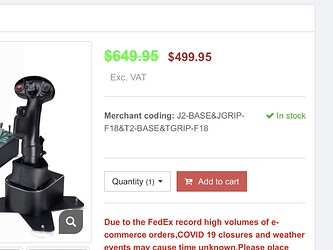 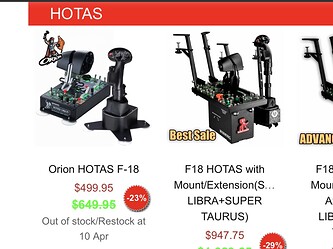 There is nothing tying the units together. Like the WH or X56 you can use the 2 units separately if you wish, although it of course makes the software setup more complex.

As for the trigger, when you pull the 2nd stage it’s a very solid “clunk” that is different from stage 1’s click, as opposed to my old G940 (the last stick I had with 2 stage) where they were both the same feel.

Well I have the whole thing assembled and have started programming DCS to use it. Going to be a LOT to remember, especially for any plane other than the Hornet. Guess people with the WH had the same thing when flying anything other than the A-10!

The stick and throttle are very solid and move very smooth. I don’t even recall my old Cougar moving quite this well. I know Winwing are working on an F-16 throttle grip which I might get for flying single engined jets, but the number of screws I had to use to get it setup definitely precludes any kind of “hot swap”. You would probably only pick one setup per day.

I will say that compared to attaching the stick to my Cougar base back in the day, this was much harder as the connector is on a SHORT wire coming out of the stick base that makes it very difficult to plug it into the base’s connector. So while in theory you CAN swap the grips, in practice it will likely be frustrating.

Switch motion is solid and feels like good construction aside from the mark button/hat which still feels higher quality than some of my X-56 hats but also feels like it is the lowest of the Orion’s.

Can you provide some pictures of the HOTAS?

I’m not very good at taking pics, so they won’t look better than this one:

I can attest it does look EXACTLY like that, though, aside from the floating logo.

Check the link I provided as they have some great shots of the grips up close, unless there is some area you’d like to see that they omitted?
They seem to be constructed entirely of metal besides a few buttons and the hats. If it’s silver, it’s metal, as is the base and grip.
I think they use 100% Hall sensors so there won’t be any spiking or twitching from the axes.

Looks interesting, but pretty much what i have already with a mix of TM and Virpil for stick
bases and TM Grips, good to see more choices of course.

Does that X-shape base come off the joystick if you want to mount it? I assume it does.

I see they make a short collective too. I will have to keep an eye open for reviews. Quality looks top notch
I can’t see the collective in the store but have seen it on a PR photos preceding a grim reaper video

It had to be assembled. The grip was one piece, the base was another, that plate another, and the suction cups on the bottom of it yet another (if you’re using it on top of a desk).
You can instead mount the X plate, or not use it at all like Super Libra/Super Taurus setup does.

How’s it going with this @JediMaster? It looks good value.

Question: Does the TDC on the throttle depress, and if it does then can you slew ok with it pressed in?

It’s been a bit of an adjustment over the X-56, but going well so far.

Yes, the TDC depresses and you can move it while depressed. That said, the force necessary to depress it and then move it smoothly makes it more difficult for my left index finger to be precise. I have stuck with click-then-move-then-click vs click/hold/move as a result. YMMV depending on your hand strength.
The other hats all offer motion plus depress but there it’s always either/or, a 5th direction for the hat as opposed to down + left for example.

The X-56 by comparison has no clickable hats, although the 2 mini sticks offer it. However, the force to click them was so excessive compared to the high sensitivity of the sticks that I never pushed on them. Invariably the cursor would move all over when clicking either of them.

While I really like the sticks, I’m not sure if I would ever get different grips for them because the connection process is non-trivial as my math and science professors would say in college.

Unlike the WH stick to base snap in, these are wires with push on/screw on connectors and space constraints that made it the single most time consuming part of assembly. The Hornet setup,though, is very flexible and I’ve been able to map it to all the planes so far, with the Viper/A-10C needing the most hats of course.

I’ve also heard from someone with the Super Taurus that you must redo the firmware of the bases when swapping the grips, so if you wanted to go from Hornet to Viper that’s sort of a “tonight I will fly only this plane” setup and not an in-between missions choice.

Good info - thanks for that. Yep, I’m pretty interested in these, they look good.

Conversely, the throttles look really easy to swap/remove? Some hardware screws for mounting and screw in the plugs? EDIT: Just saw you referenced the grips needing a firmware update. A bit annoying, but makes sense, given the viper handle has more rotaries and such. I figure for DCS, rapidly going betwixt the more advanced modules is tough anyway, as you need to re-wire your brain a bit. Personally I tend to stick to plane for a few weeks at least, so I don’t mind the 20 min it sounds like it’d take to swap over.

Asking b/c I’ve been considering asking Santa for a Super Taurus throttle. The Hornet has become my go to DCS module, and it gets real sensitive to throttle input. The extra travel would be nice.

Also, under the assumption that the grips they are apparently bringing to the Orion would also work on the Super Taurus, that could be quite a versatile platform. Really liking the idea of being able to have a Viper throttle once that module gets further along.

They also get solid brownie points for finding a way to work in a collective on the orion. Likely wouldn’t work as well on the Tarus, but that’s really innovative. 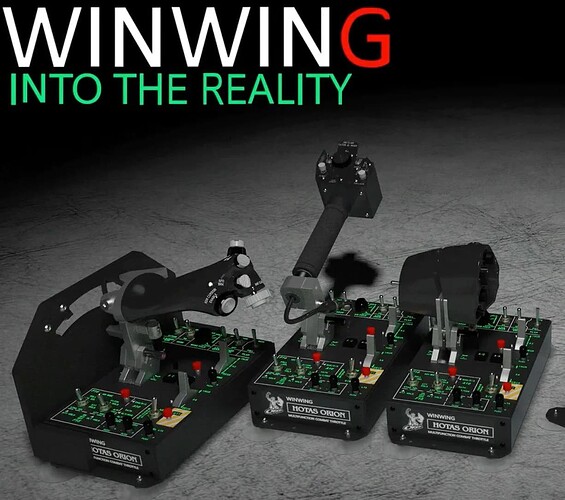 However, you can see from that picture that the F16 one would take time to swap into/out of thanks to that plate.

I get periodic firmware updates for both the bases and the grips, sometimes just one or the other. They’re not in lock sync.