That could have been so much worse…

Damn fine response time for the guys running over to him.

“I couldnt see you”…

Communication break down gets you that.

Communication break down gets you that

Radio is for wimps

Communication break down gets you that

I knew someone was going to go with that the moment after I hit reply!

I knew someone was going to go with that the moment after I hit reply!

I simply had to.

wow he was lucky

I don’t understand what was going on there - He stopped and was getting out on an active runway? Did he have engine trouble and aborted the take off? I ask this simply because he didn’t seem to have any of the urgency that comes from knowing you are stopped in front of launching planes.

He wasn’t the only lucky one. The guy who hit him had a lottery moment as well.

I believe this was a Red Bull / or Reno type air race. And I think they start from the runway all together (like a Formula 1 grid start or something). They are obviously staggered and offset…and when he raised his canopy that was supposed to trigger a red flag or something that will tell people behind him that there was something going on in front of them…but that obviously didn’t happen or wasn’t seen. I could be wrong on all that…but that is what I inferred from the footage.

This is (I thin) how they normally start: “I couldnt see you”…

I think the other guy was so focussed on getting a move on the green flag that he, and everyone else ignored the red flag going up. Although if true then I wonder what the race control was doing.

Then again, I have no idea how the rules are structured for F1 in the skies.

The description of the YouTube video actually has all the details:

WARNING,
GRAPHIC CRASH FOOTAGE (And some foul language). (All rights reserved,
commercial distribution or publication with our specific written
permission is not authorized)

On September 18, 2016, during the
Gold final start we experienced an accident involving our F1 racer, ‘Hot
Stuff’ and a fellow competitor’s airplane.

We were number four
on the starting grid, which was the middle inside position with three
aircraft on the front row, one to our right and three behind. Upon
running the engine up in anticipation of the start, about 20 seconds
before the green flag drop, the engine was not running well enough for
flight, as you can hear from the audio, never mind racing. I made the
decision to shut the engine down to signal the starters to halt the
starting process. The flagman on my row put his hands in an ‘X’ over his
head, as our procedures prescribe, and I opened my canopy to make it
clear I was out of the race and so everyone could see me. The alternate
airplane was signaled to taxi on to the runway to replace my entry. I
felt confident the communications had reached the appropriate people and
waited for personnel to push me off the runway.

However, much to
my surprise, I saw the flagman run out on to the runway waving his
hands over his head as if something was wrong. The aircraft to my right
started rolling and a few seconds later the number six and eight
aircraft flew by me on either side. All I could do at that point was
hope the number seven (center) aircraft would clear me on the centerline
to my right.

The impact was violent and loud. His left leading
edge shaved off the top several inches from my vertical and skimmed the
turtle-deck without touching until it impacted my right hand holding up
the canopy, at well over sixty miles an hour. The left landing gear hit
the top of the gull-wing center-section, blowing a hole in the top skin
and impacted the rear face of the front spar so hard that it broke the
landing gear clean off his airplane. The propeller sliced three evenly
spaced gashes about mid span of my right wing, about a foot apart. The
right landing gear sheared the wing off just short of the right wingtip.
The impact spun me around nearly 180º, like a teacup ride at warp
eight. The other aircraft came to rest several hundred feet in front of
me with a folded gear, damaged wing and sheared propeller facing the
other way as well. That pilot received no injuries.

Three things
immediately came to mind. Make yourself as small as possible to avoid
further injury until things stop moving. Once the aircraft came to rest,
DON’T MOVE! And since I was not on fire, wait for help to arrive. I
knew my hand was busted and was not looking forward to removing my
glove. But it was more important to make sure I had not been struck in
the head or hurt my neck or back. After assessing my situation I
realized I did not have any further injuries and proceeded to shut the
switches off and assist with un-strapping myself from the wreckage. Help
was there very quickly, including my flagman.

Then I proceeded
to ask the condition of the other pilot and how this had happened. The
video should speak for itself. My next concern was to let my crew know I
was OK. The one thing any spectator looks for in an accident are the
correct number of flight suits walking around the wreckage after any
crash, I made sure I did. Everything else can be fixed. Reno EMS quickly
patched me up with a splint and had me walking back to my pit in no
time. They really are good at what they do.

Hot Stuff suffered
severe damage. It’ll be several months before we figure out what to do
with her. I’m not the slightest bit upset over the accident. I, in fact,
consider myself a very lucky man. Another four feet to the left and I
would have been minced meat. Literally dodging a bullet. A busted up
hand is a small price to pay. I’ll take it. It’ll heal. Though it is
difficult to type one-handed.

I’ve said many times before and
I’ll say it again, there’s risk in everything we do. But the counterpart
to that is reward. I choose to cross the street because the risk of
crossing the street is worth the reward of getting to the other side.
Same thing with air racing, I’ll be back. Of course there’ll be a review
of procedures, how to prevent something like this from happening again
and a thorough investigation. I’ve used up another of my nine lives, but
why would you have nine unless you plan to use them?… We live, learn
and race on.

@EinsteinEP if you were wondering why I’m distrustful of tail draggers.

@EinsteinEP if you were wondering why I’m distrustful of tail draggers.

Tail draggers aren’t inherently bad. This was a case of communication failure and the fact that they launch aircraft all at once at Reno. Which is a practice I would’ve looked into stopping after the 2011 crash of The Galloping Ghost when there were so many safety reviews.

Just have the aircraft talk off in 2-3 ship formations. 2-3 at a time. They’re not racing the moment they’re cleared for departure as they still have to form up with the pace aircraft.

The other thing he had going for him is that F1 racers are tiny and tough. They are powered by O-200s, the same engine as the Cessna C-150. M x V worked in his favor. It’s a good thing his turtledeck extends above his head!

This was a communication/situational awareness issue. There are plenty of other reasons to be distrustful of tail draggers. You know what could have potentially prevented it? Forward visibility. Boom! Checkmate Dragtheists. 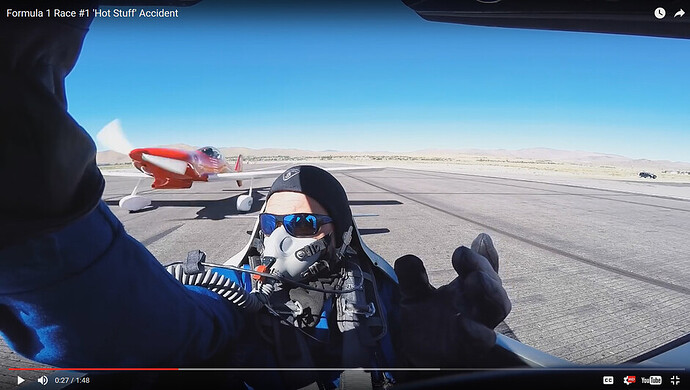 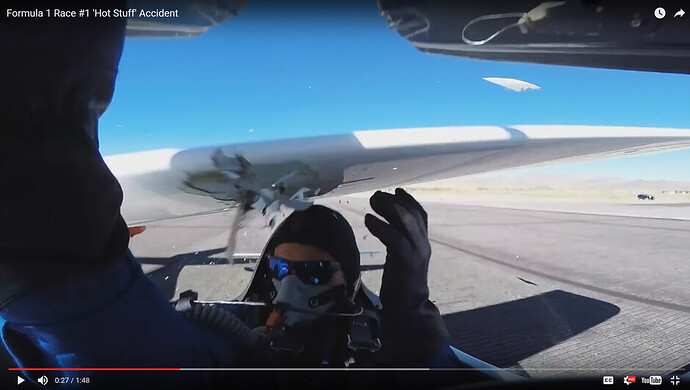 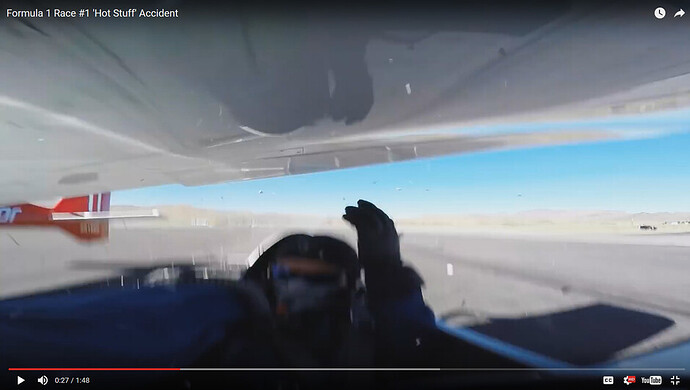 I slowed the video down on youtube last night and it really highlighted how close this was, here’s a couple of frames.