Polychop is proud to reveal to you the module we’ve been working on for the past two years, the OH-58D Kiowa Warrior. Licensed by Bell Textron and with the input and feedback from many very dedicated subject matter experts from the Kiowa community, we think the OH-58D module will be on par with the other high-end helicopter modules currently available in DCS World.

Fitted with the iconic Mast Mounted Sight and a vast array of weaponry we think the Kiowa will stand its ground and have its place in the DCS World eco-system, capable of fulfilling many roles ranging from recon and AFAC to close air support and anti-tank warfare, day or night.

Learning from the past and including subject matter expert input and testing right from the start, countless hours have been spent at coding a new and true to life flight model to a point where we can honestly say we’re proud of the result. We don’t take that statement lightly as we know the flight model of our previous module did not live up to expectations. That said, the SA-342 Gazelle module will be updated in time with the new technology developed for the Kiowa. The same amount of time has been spent on meticulously coding the implementation of all the systems, devices and weaponry available to the Kiowa’s crew.

Parallel to the coding, a true to life and detailed visual representation has been modelled and fitted with high resolution PBR textures to ensure stunning visuals that make it a joy to play with. With a fully clickable cockpit and all the correct switchology in place it will surely make any Kiowa pilot feel right at home. That said, a lot of work is still to be done on both the art and code. This process will continue for the next few months. An expected release date can not be given at this time.

Being a licensed product, the OH-58D module has to adhere to the standards set by Bell Textron, which we believe will in turn benefit the community in terms of quality control. Both the high but expected standards set by Bell Textron and lengthy but needed contract negotiations and legal requirements with Eagle Dynamics led to the fact that the development of the Kiowa module up to this point has been sort of a public secret. With multiple parties involved and no signed contract we could not share as much information with the community as we would have liked. We have to point out that at this moment, no contract has been signed yet but the latest draft is one we think all parties can agree to. With a contract on the table that is acceptable for all parties involved, the time has come for us to share with you the status of development.

We’ll be doing this by posting periodical situation reports during the remainder of the development process. In every one of these sitreps we will go over a number of features already implemented and the things we are still working on. 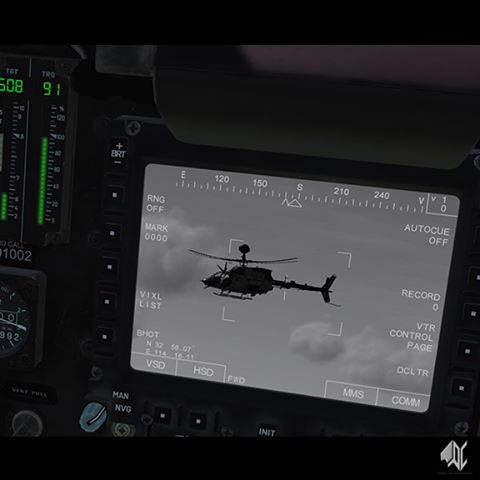 I don’t think they were fooling anyone with their teasing, but I hope they pull this off. There was a lot of “junk in the trunk” for the 58Ds (you could tell by all the Kiowa guys looking for ways to shave off a few pounds) to add in a lot of unusual capability. Yeah, it was a light gunship a lot of the time, but the gee-whiz electronics did a lot of fancy stuff.

MMS was still a POS though. There’s a reason the 58F was going to have a nose turret.

MMS was still a POS though. There’s a reason the 58F was going to have a nose turret.

Please expand - the mast mounted sight wasn’t working well? I just remember seeing all the illustrations of how the Kiowa was sitting behind a convenient hill and an Apache sitting next door behind another convenient hill and the unsuspecting T-72’s rolling along on the other side…are you saying that it didn’t quite work as easily as that??

A bit like the newspaper illustrations about Harrier pilots doing VIFFing as a standard technique in their everyday “dogfights”, perhaps.

I hope they pull this off too - I’d love to have a Kiowa in game!

Theory was that they would sit behind a hill and stick the mast up alone, like a periscope. In practice, they tended to need more of a look down capability and the mast mounted sight didn’t help as much as they thought. The 58 was already a small, quiet helicopter and they found they needed more “look down” than they did “bob up.” Granted, this is in the context of COIN, but that became the bread and butter for most Kiowa guys – rapid response as light gunships. The MMS itself was a good piece of hardware, but hard to work with when your mission shifts to attack as opposed to observation.

There’s a reason the 160th guys use a nose mounted sight despite a mast mounted option for the A/MH-6s.

For reference, here’s a 58F prototype: 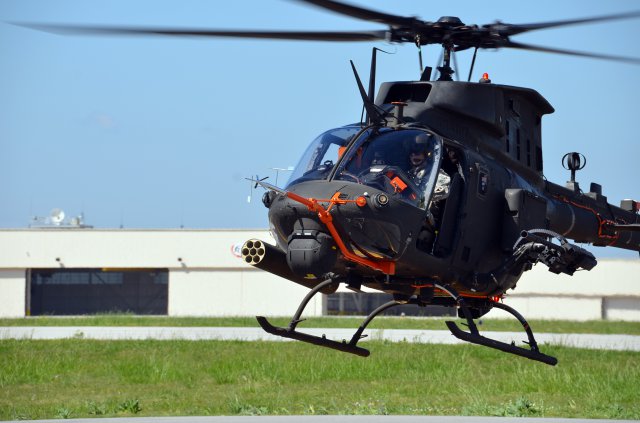 I used to have some pictures of 58Ds in operation with the MMS removed but can’t seem to find them now.

The MMS itself was a good piece of hardware, but hard to work with when your mission shifts to attack as opposed to observation.

There’s a reason the 160th guys use a nose mounted sight despite a mast mounted option for the A/MH-6s.

Wow… Thanks for sharing this information. My experience with the Kiowa is based on articles, airshows, documentaries, and the fortune of flying a tech demonstrator some 20+ years ago.
All I can say is, I hope Polychop does a great job with the helo because it is one of my favorites.

This is what will be in my head while flying the PolyChop-DCS Kiowa. Love the mustaches and Zeppelin, but someone stole their M4s!

I really hope they succeed in bringing us a high-fidelity helicopter.

Is it wrong that I’m more excited for this than The Early Model Cobra??

I’d rather have the cobra if I’m honest. But any additional vehicles are always welcome.

Is it wrong that I’m more excited for this than The Early Model Cobra??

Nope, OH-58D is infinitely more capable than anything up to the AH-1F. Even at that, the AH-1F lacks HELLFIRE and laser designation capability. Keep in mind the OH-58D didn’t start carrying weapons regularly until after ODS though.

Are we still getting a Cobra?! A double dose of good news!

Maybe/kinda/sorta. Rumor is AH-1F after previous indications of AH-1G and AH-1W. AH-1W was supposedly canned because of data access, AH-1G was changed due to complaints it would be out of place, and the latest I saw was the AH-1S got the nod, with indications it was a MOD-S (aka AH-1F).

AH-1F, my absolute most wanted helo

There’s a AH-1G in the game’s files but I suspect it’s quite old and it doesn’t have all the animation links. The AH-1F would fit in well with the 80s-90s era, even with the limited capability set.

I think a TOW Cobra would actually be more fun than any of the more modern stuff. The Ka-50 to me showed how boring a helicopter with ATGM that out range most mechanized threats is in DCS. It was just about maximizing your standoff and shooting fish in a barrel. I think any Hellfire armed helicopter would be much the same. What I would like about a TOW Cobra (and in principle also the HOT armed Gazelle) is that it requires to get close, making it vulnerable and requiring tactics to overcome this. It is all about sneaking around, making surprise attacks out of cover and/or using suppressive fire. If just this would work more realistically against DCS´s AI…

In any case, the AH-1F would make an excellent historical companion with the OH-58D, as these have frequently worked together.

Yes, but that’s preferred as the 30mm will be far more useful than the 12.7mm, plus AT-6 missiles over the incredibly poor AT-2.

I think a TOW Cobra would actually be more fun than any of the more modern stuff. The Ka-50 to me showed how boring a helicopter with ATGM that out range most mechanized threats is in DCS. It was just about maximizing your standoff and shooting fish in a barrel.

Most of what the HELLFIRE does is allow you to engage far more lethal threats as well as use them in a handoff fashion. Taking on an SA-19 is a hell of a lot more friendly with HELLFIRE than it is with TOW. Having said that… TOW will still outrange a T-90’s main gun (except the missiles) and TOW 2A will defeat most modern tank armor. But key thing is that the TOW will restrict the launch platform’s motion for about 15 seconds to maximum range.