Question about leaning and EGT

Last night while tooling along in the default X-Plane 10 Cessna 172SP at 6k and being so thoroughly unimpressed with my forward velocity, decided to get more involved with the mixture knob than usual. I had leaned at 4k then again at 5 and 6, but not getting much more than a hunch indicated, decided to zoom in on the tach and lean for max RPM. I mean having flown this a/c IRL, knew that there should be around 9 or 10 more kts. to spare.

So I leaned to RMP drop off, then back to max RPM. That didn’t result in much difference in the airspeed indicator, but at least I felt like I was doing my part and went back to counting pine trees and wondering if that cute bartender with the tight camo t-shirt would be working in Wrangell tonight.

About 15 minutes later I noticed that the EGT needle was pinned at the top of the range, where it should be based on my previous action, and decided that since this was a CAFCO job and that I owned the airplane, and that the next TOH would probably be on my dime, decided to richen up the mixture a bit. I mean this 450 lbs of dog food that I’m probably hauling needs to get through!

So with regards to recips and EGT, where should one lean to? There isn’t a green arc or red line on the gauge, which leaves one to believe that it’s a matter of personal preference. It’s probably in the POH somewhere, so maybe I should actually read it rather than just keep it around in case we get checked.

From what I recall you lean til egt peaks then lean it a bit further so it drops two notches on the gauge.

Read that somewhere I’m sure.

I was always taught…and it seemed generally accepted, to lean to peak EGT, then enrichen by 50F. You shouldn’t see much in the way of changes in manifold pressure or tach really…just temp and fuel flow…

As well…most (but not all) non turbocharged complex aircraft like to run at about square on the MP and prop rpm. So if you can pull 24"MP, you probably want to be at around 2400 RPM. This obviously does not hold true for geared engines (402C) nor does it work for turbocharged engines. Those babies you are way better consulting the POH and finding the listed power setting for your cruise power setting 60%, 70%, 80% or whatever…and setting it that way.

The POH should always be the final authority. Rules of thumb are nice…but engines are expensive!

Thanks guys. I found the applicable section in the POH… 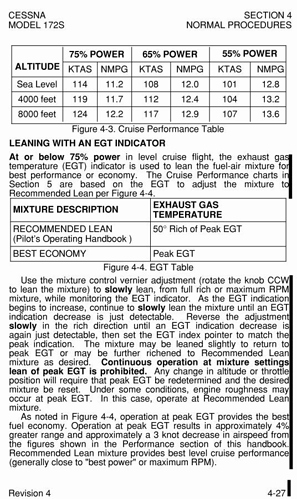 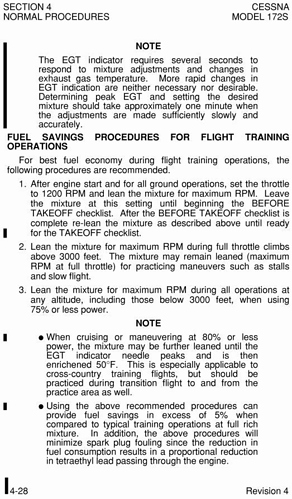 Cool. I think with some complex airplanes that have the individual CHT bar gauges…you should target the hottest cylinder for that peak + 50 technique…

Is CHT really used to lean the mixture? Wouldn’t that be an EGT gauge?

I found this broad discussion of EGT/CHT on AvWeb. It sounds like to do thorough analysis, you need a guage that displays both. The EGT is typically used for mixture setting and the CHT helps determine engine health.

Right…the EGT and CHT debate is always a lively one. Some even advocate for combing the two. I think the peak EGT+50F was probably developed for the masses because it was easy and doesn’t require a lot of monitoring. Whereas the peak lean -50 (while keeping the CHT in check) is probably one of those things that require more monitoring and awareness or you could damage things easier. It is interesting reading all the different techniques and viewpoints on it for sure…

I somehow managed to skip flying much more than 300 hours in piston powered airplanes. It all seems like voodoo magic to me now