Car starts running rough and is dropping some oil. Take car to Toyota for diagnostics as I was unsure of the fault myself (diesel). 170 pounds later for diagnostics (which show no error) and a supposed quick fix to the oil leak and a clean of the EGR valve (which is the most common fault), I am assured its all good to go.

Still in Toyota’s car park, the car takes 3 times to crank up, still running rough. Mr service guy takes it round back and has another look (my wallet stays hidden now) and says its now an injector problem…

He says its fine for the moment as it will just run rough and I can decide if I want to go ahead with new injectors a couple of grand replacement, but will in the mean time look for reconditioned ones to the latest speck for a cheaper alternative.

So I drop the kids off at school, driving home, smoke is bellowing from the back end and smoke from the front end. The is a god awful clunking sound as I drive in. My neighbour two doors up chirps in and says “that doesn’t sound too good”.

I am no mechanic, but I pop the hood remove the engine fairing and covers and quickly ascertain in less than 2 minutes that I can physically jiggle one entire injector assembly in its housing. So its either worked loose or stripped the threading (essentially blowing and injector).

I found that in 2 minutes and “proper” Toyota mechanic could not find the fault at all. Thought it was an outdated injector playing up. Well yeah it was playing up allright !!!

I have had words to Toyota and the car is making its way back to them on a tow truck tomorrow with a 6 foot 2 ex rugby player aussie with a really really nasty look on his face.

I remember going on a road trip in college with a buddy of mine to Key West Florida and he took his car into the dealer to have a full tune up before we left. Just outside Trenton NJ the engine starts kicking like a mule and the hood is banging like something is trying to get out. We open her up and the mechanic hadn’t tightened one of the spark plugs and it spit it right out!

That always stuck with me because the whole purpose of the tuneup was to avoid road trouble on the trip in first place.

Ugh. Car horror stories. All I know is…if you find a good mechanic…treasure him and be a repeat customer. Lots of shady people out there. I’ve been pretty lucky with my cars. I’ve only owned three in my life - a Camaro, a Honda CRX, and my new Subaru. I’m mechanically inept…so I’m lucky to have found good shops.

Who the ■■■■ leaves a six foot step ladder in the left lane of the interstate?

That actually happened to me on the 5 in Carlsbad, California about 8 years ago. Put a nice dent in the underbody of my Prelude.

A year and a half later, I took it to the neighborhood shop for the 180K service. Paid out the nose for it, but the shop has excellent ratings on Yelp.

Three months later, the engine seized and shut the whole thing down. Come to find out the timing belt was worn and had broken, and my pistons had their faces resurfaced by hard contact with the valves. My carefully built engine had been reduced to a big, expensive lump of aluminum. The timing belt was supposed to have been replaced, and valve lash measured and the springs checked for wear at the 180k service. It was immediately obvious the shop hadn’t done either- the head gaskets were obviously a few years old (from the last time I’d worked on the engine). Come to find out all those sparkling reviews on Yelp were from friends and family who opened accounts just to review the shop.

@Bogusheadbox
Hey- next time take this…

If something breaks- you can fix it easy!

I live in rural France. The speed limit for single carriage roads is 90kph. To the average French person (including 90 year old women) this translates to 130kph! Drive at 90 and within 30 seconds you are guaranteed to have a car 1 metre from your boot with the driver having fits because you are holding them up.
They like to let you know they are there by also having half a cars width on the other side of the road so you can see them in your side mirror. They may pull in at the last second when something comes the other way, but they might not, depends if they want to kill everyone. But what really gets me is … when they finally have a straight road to get past you, they pull back to a safe distance and then when the road starts bending again they go back to the " I will kill you if you don’t speed up mode".

Rant over, thank you. I feel better now 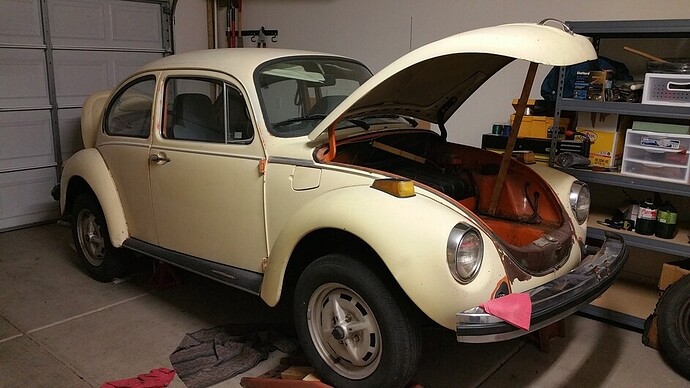 Run over a ladder and get back to me

Run over a ladder and get back to me

Sounds like more of a driver issue than a car issue.

As for the mechanic complaints that started this thread, a few years ago I had spent a few weeks trying to trace down an electrical short in one of the running light circuits - as soon as I’d turn the headlights on, the running light fuse would pop - with absolutely no luck. Getting to the electrical harness on a '74 super beetle isn’t bad, but I just could not isolate the short.

I was also getting ready for another road trip and needed a carb tune (I can never do those myself), so I brought the bug to a bug shop. Chatting with the guy writing the ticket, I mentioned the electrical short and he said they’d look at it, no problem.

I pick up the car a couple hours later, it’s purring like a kitten, and the electrical problem seems to have been solved! Great!

Fast forward to me driving along a California highway at night, headlights on, enjoying my now operating running lights, when I notice a smell in the car. I start looking around the floor, wondering if someone threw some food or garbage into my car window while I was at the last rest stop, when I remember VW’s don’t have floor lights - HOW CAN I SEE THE FLOOR?!

That’s when I notice there’s a red glowing light emanating from the fuze box which is also dripping melted plastic onto the floor. Those ijits at the shop put a piece of metal, snipped to fit, behind the fuze so that it wouldn’t blow!

And that, ladies and gentlemen, is just one reason why I have car mechanic trust issues.

Those ijits at the shop put a piece of metal, snipped to fit, behind the fuze so that it wouldn’t blow!

Pretty sure that’s an approved maintenance solution for Volkswagens. I know it is for anything British.

Computer has decided to poop itself. It seems to be either the mobo or CPU. I am livid.

You know what to do.

Aaaaaand by process of elimination (no post with one stick of RAM, no peripherals, and a different CPU), it’s the mobo.

It can sometimes be the case that a PSU spike killed the mobo. If you buy a new board then I’d be cautious in just using that same PSU on it straight away. Or if you do then quietly put it back in the bag, whistle and return it saying ‘wrong color’.

Ya’ll need to stop talking about hardware problems right now. I mean…it could be infectious…and that’s the last thing I…