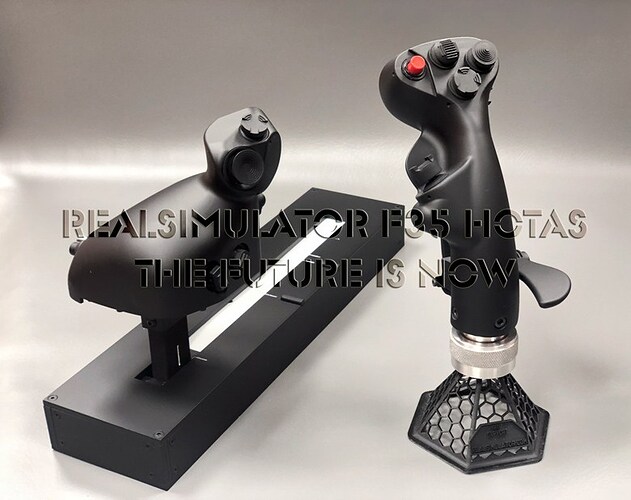 After long time of hard work, we have the pleasure to present you our new product, the RS-F35 HOTAS .

The Realsimulator F35 HOTAS system is made-up by: throttle base, throttle grip and flight sitck grip for the FSSB-R3L.

We show you a picture of our work in progress RS-F35 HOTAS system and continue the preproduction to make possible open the preorder ASAP. 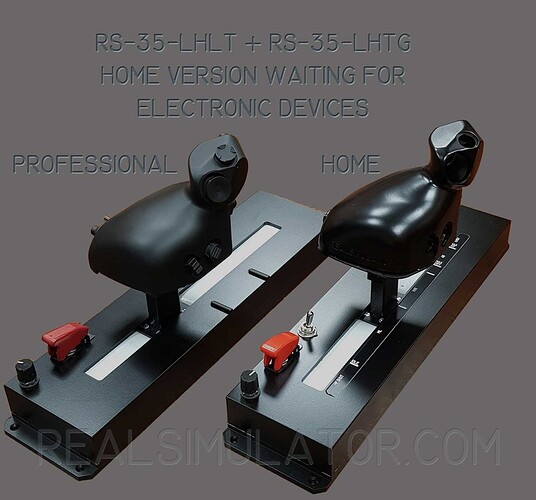 That got to be the ugliest throttle I’ve ever seen.

I’m not even sure how to hold that…

That got to be the ugliest throttle I’ve ever seen.

Seriously, I can’t understand why you’d develop and market a HOTAS for a jet that will likely never see the light of day in DCS or similar products.

I just don’t see them moving very many units of this.

Seeing the Viper throttle for the first time made me scratch my head a little, but this thing I wouldn’t even know where my hand goes on this. Those buttons are in weird places.

Yeah, it is cool, and there are those that “just gotta have it”, but for myself (who can’t afford to buy them all

- and I’m not sure I’d want to take the time to swap them out for each different sim aircraft), a high quality generic HOTAS is where I spend my money. I’d imagine they would have to be expensive. More power to them though.

Seriously, I can’t understand why you’d develop and market a HOTAS for a jet that will likely never see the light of day in DCS or similar products.

I’m equally perplexed by this. You’d think that for specific replica products, choosing the HOTAS of an aircraft for which an accurate simulation exists, would make a lot more sense.

I know what you mean…But I believe The Company “RealSimulator” does contract work for Professional Simulators.
I imagine they’ve been contracted to make one for USA or another country who fly’s the F-35…and since all the hard work is done…Design/Engineering/Production…Why not offer a cheaper replica for the Home Simulator Market???
It’s similar on how The A-10C Came to be in DCS…It was first a Contract Project for The USA Air National Guard that filtered it’s way to us.

Crazy as it looks, it’s oddly comfortable. You hold it almost like a mouse so it’s sort of serves as a
palmrest.

Don’t think it would suit all legacy aircraft however.

That would make a lot more sense - that’s probably the story!

Okay, that makes sense. I just figure out what part I was supposed to grab, a lack of scale accentuated that problem.

No, I’m not kidding!
I mean- of course one would think that being the perfect replica of the F35 throttle that’s what you’d use it for BUT it has a nice amount of switched and “wotsit” that it works (probably) wonderfully for space games!

Elite Dangeorus, Star Citizen, Space Engineers, those other ones that are realistic and complex…

There is a great deal of games, beside flight sims, that could really use such an unusual throttle.
Ugly as it is.

Just back from a re-install of LM’s Prepar 3D v5.1 and a long night of re-installing stuff, it just kept crashing on me and I don’t know why? So far so good though.

But default aircraft in this sim is the F-35 and LM’s depiction in sim of the throttle and stick look kinda close to these shots … the F-35 is supposed to be the absolute crème de la crème state of the art … or so LM will have us believe, its some Aircraft for sure, so maybe that’s what its throttle looks like?

Always thought LM’s cockpit of the F-35 looked kinda cartoon-ish to me, but what do I know?

I know its apparently an all glass cockpit display in real life though.

Not that I have any real plans to buy this controller, but you never know, it might just be the next gen most ergonomic and comfortable throttle control ever? always used to arc throw PC throttle controllers, but if a sort of flat slide throttle is what the real jet uses, maybe that’s for a good reason?

Are there any real pictures of close up detail of the F-35 cockpit and controllers (any variant) out there we can compare with?

It could just be that LM want to throw folk off the scent with their P3dv5 F-35 sim cockpit, Russia, China are bound to be able to get a hold of this sim too.

Whatever the case is, its hard to imagine the glass cockpit in P3D is accurate and its depiction of controllers too?

The stick base in pics, doubt that’s a controller base as we all must realise

a WIP pic maybe with a base to display it on … I really don’t know? LOL

If they are serious and these are indeed early visionary shots, good luck to them, have plenty of controllers here already though for now. It’s ugly as stated above and not very useful for a home cockpit. And the price, 3200 EUR… who are they kidding. I’ll give them creds for the way it operates though, but wow, what a cash grab.

The estimated product price of RS-35 Throttle for small manufacturing batches (5 units) is 3.200 Eur/unit, however for a batch of 200 units the price per unit is 1.470 Eur . If at the end of the preorder period the total number of orders is much higher than 200 units, the sale price will be recalculated; as it will be obviously lower, the difference between the new calculated price and the one charged, will be returned to all buyers.

Once the pre-order period is open, a progress bar will be updated periodically to reflect the current number of pre-orders.

If the order status is under 100% by the time pre-orders close, we won’t manufacture the item and the whole money paid (in EUR) will be refunded. Any case, we will be in constant contact with customers to hear his suggestions.

So if they meet those initial 200 pre-orders The price is 1.470 EUR…The F-16 Grip is still under development…If they have a similar pre-order For a Viper Grip/Base I think they would exceed the pre-order number because of popularity of The Viper…ether way it is very expensive for home simmers…I love their stuff but it’s still too much for me to justify…On the other hand if you’re a Dedicated Viper Driver building a home cockpit?? This might be a “Must Have” as I’m not aware of anything on the market presently that compares.