No, shouldn’t need them assigned to an axis.

Ugh. Don’t tell me there’s another big one coming…

I’m not well informed or anything - but it looks like there’s a few things that are broken and will need fixes in short order, so I’m guessing that there’s more downloading to do soon.

The downloads should be incremental, so if you’re not sure you’re going to play or play with all the features, you can download now and your next downloads should be a smaller size. If you want full access to everything and intend to play in MP on most servers, then stick with 2.5.5 and wait for a big patch in a day or two.

Do I need these assigned to an axis?

No, shouldn’t need them assigned to an axis.

@Franze is correct (as usual)…normally you just set them in flight position and leave them. However, I like having them assigned to an axis. Why? Well I tend to get shot up a bit (“No @Hangar200! Say it isn’t so!”) and when you lose an engine it’s nice to able to bring the other’s power up without taking your hands away from the collective.

I will test this today. (sigh)

This is what I see in the axis controller setup. 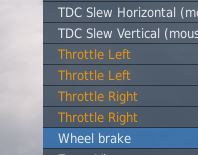 I get the same thing with my Mirage 2000 kneeboard key binds after switching from the MiG-21…I have to go all the way out and restart.

I checked and don’t have that, but I’m also on the steam version.

it’s nice to able to bring the other’s power up without taking your hands away from the collective.

I always fly with both throttles full. So far, no issues.

Ah, I see you’re a man of Russian flight operations as well.

Isnt that helicopter SOP? I dont see myself “hypermiling” a Huey just to get ten extra miles of reach.

Well I tested it. It seems only one of the two lines accepts/recognizes the axis. The other recognizes it and in the sim, it works just fine. (…and there was mc rejoicing)

I always fly with both throttles full. So far, no issues.

The checklist says to open the throttles to the MIDDLE (page 241 of the manual) which it indicates is standard for normal ops. There is a detent there.

The issue is the generators. They don’t work if the engine RPMs are above 80%. While I haven’t done a dedicates study, I have noticed that sometimes the rpms don’t expeditiously climb high enough and you get general failed indications. So putting the power levers above the detent works to get the generators on line.

Not really sure why or if you are not supposed to put them up to 100%…fuel consumption?

I am all about SOP until it interferes with gameplay. I just hover the mouse and roll ‘em all the way up. I’ve flown hours this way with no ill effects. In the Ka50 I more responsibly roll them right up to, but not past, the engine-out gates.