It has been quite a long time since I have flown in FSX or X-Plane, long enough that my copies of those sims are drastically out of date (though I did pick up FSX on Steam during a sale at some point).

I have been thinking that I have been spending too much time in DCS learning advanced topics and systems (forgetting them, relearning them and forgetting them again) and had the thought that maybe I needed to learn something a little more … mundane … to get me back to being grounded (pun intended?). I was never that great at instrument flying, navigation without a GPS/Waypoint system or properly versed in airport procedures.

I am thinking, after watching Frugals video for the DC-6, it might be fun to get back to those grass airstrip roots.

So … I am looking for some suggestions based on the following criteria:

I think that means X-Plane plus an aircraft or two, plus terrain. Or maybe Prepare3D?

What general aviation aircraft would the community recommend?

No guarantees here, though. I have been thinking about a DCS: M2000 multiplayer/episodic campaign and the F-5 is hitting pre-release pretty soon

I’ve been thinking about picking up x-plane 10 myself, on cd key websites its a bit cheaper.

EDIT: just tried X-plane 10 demo and I’m sold. Steam Summer sales are coming up soon’ish so i’ll hold it since it usually halves price around that time if the steamprices website is any indicator!

Note that you cannot download the demo from the official website, it gives you the full installer which requires a cd key. I got the demo from fly away simulations website.

So I’ve got both. I haven’t done a whole bunch of research into the assertions I’m about to make and wholly expect Beach or someone to come along and smack me with the stick of truthiness.

Personally the issue I ran into with X-plane is that I have no motivation to fly it. In DCS my motivation is simple: kill the thing. In FSX/P3D my motivation is generally land on the carrier, or complete the mission. In X-Plane, I wanted to fly general civilian aircraft, but there is nothing to give structure to my task, nothing to give the pretense of a task. You are responsible for imagining and creating that, and for me it got boring quickly. It’s like taking a Sunday drive, enjoyable to some, but to me it feels like waste of time I could be spent doing or making something else, or sleeping. When I searched around for something like this, or the mission system from FSX, there was a great deal of guffawing and insistence that such trivialities are for games like FSX and X-Plane is a simulator. I want very much to like X-Plane, but it just does not hold my interest as is.

For fairness’ sake, P3D is basically FSX but. The graphics are FSX but prettier. The GUI is FSX but a newer MS .net implimentation. The scenery is FSX but newer. Most of the payware and freeware planes I’ve bought work in it, and I’m enjoying the new lighting engine (I also swear they swiped X-Planes autogeneration of sim traffic, but having nothing to substantiate this), so I’ll probably stick with it over my old FSX:Steam install. Still, it is nothing ground shattering. It’s very much an FSX install that has been reupholstered.

You should most definitely be able to get the demo from x-plane.com

Try it, spend a good 30 minutes trying to figure out why it kept insisting for a CD-key. you get the full installer. Not the demo installer.

Well, you already have FSX Steam, so you’ve got that cost out of the way. For X-Plane, you’d have to go in for whatever it is going for at retail.

Personally (and this is a highly debated topic in the civil community), I like the feel of the X-Plane flight model and the fluidity of the gauge update rates better in X-Plane. There is a much wider variety of aircraft of all types for FSX, but X-Plane has made great strides. The Carenado planes are very good, although they do make some mistakes in deeper aircraft systems. But once you fly some add-ons in X-Plane, the feel of the ground handling and aerodynamics makes it hard to enjoy the flight portion of FSX. That said, you’ll probably get better scenery with FSX + Orbx type scenery.

Again, I prefer X-Plane helo modeling to FSX. There are some nice helos for FSX with good flight models - CeraSim seems to be the best.

Well, you can get good scenery in X-Plane, but if you want really high detail scenery in a smaller area, you can’t beat Orbx and FSX, particularly if you start adding a la carte airports to their wider scenery areas (for instance, buying the Pacific Northwest, then adding in a bunch of their custom airports). Of course, that can get expensive. There is a lot of good quality freeware X-Plane scenery out there, but you will likely have to find individual ones and download them to build your area up.

X-Plane TIR is OK, but FSX does it better. No idea yet on VR in the future.

What general aviation aircraft would the community recommend?

For X-plane, visit the X-Plane.org store to check out the GA aircraft that are available there, and then wait for them to go on sale. Looking at my “GA” directory in X-Plane shows this:

X-Plane out of the box has the better flight models. I can’t with certainty say DCS quality as I don’t methodically research Piper Cherokees like I do my warbirds, but out of the box the feeling of flight felt better than FSX. I can’t speak for veracity of instruments.

I totally agree with this. It really is a feel thing…(but there are good FSX aircraft that circumvent the sim and output a really nice flight model…aka AccuSim and similar)…

Totally agree. And the author of that article (I’ve heard) is one sexy beast.

X-Plane supports Track-IR, but in the least supportive way I’ve ever seen. There is no simulation of your head, or anything, it is just a camera. So if you’re not careful by moving your head around, you can easily send it flying outside the fuselage, past the wing.

Personally the issue I ran into with X-plane is that I have no motivation to fly it.

Yeah - what he said. FSX has a lot of really good missions included, and there are actually a ton of add-ons that add both scenery and missions (like being a bush pilot or corporate flying or whatever). There has been some work for X-Plane on mission type stuff, but it is rather clunky and hasn’t really gone very far.

I would swear there was a way to get Air Hauler for X-Plane to work in XP10, but I haven’t tried it. I’d like to give it a shot though.

Re: FSX or P3D - I dunno, I’m still trying to figure that out myself. I mean, I bought P3D v2, but I barely fly it because I just haven’t been bothered to move all my Orbx stuff over to it. And now P3D v3 is out and I really don’t want to spend money on something else…so I don’t really have an opinion on whether to go that route.

Also…check out this ORBX coverage map that shows the areas (geographic) as well as the individual airports… Keep in mind that the major areas (ie: Pacific Northwest, Nor Cal, So. Cal) all have nicely done airports…and lots of them, and those high detail airports aren’t necessary to really enjoy the larger areas. They are there for very specific airport scenery to the point that you can see soda machines and campfires on the airports and stuff. Very high detail stuff…

For what you described @Fridge I think FSX with some payware scenery is the way to go.

I am a recent X-Plane convert, but its strength for me is on the heavier side rather than GA. The FMS side of things up is what it works best at for me. The friction of getting things set-up and all working is pretty high though, and FSX is a much simpler life.

X-Plane will be on sale on the Steam Summer thing in about 2 weeks time, and it is definitely worth picking up then. That plus the free stuff like this is worth fighting through the trackIR and set-up time: 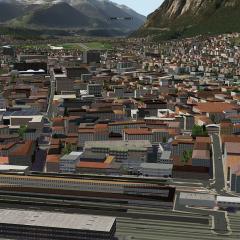 w2xp VFR world sceneries HD are sceneries based on osm data, which nearly show buildings and objects like it is in reality. Best used with orthographic sceneries. Sceneries are available for each continent: Europe, America, Africa, Asia, Antarctica,...

http://www.alpilotx.net/downloads/x-plane-10-hd-mesh-scenery-v3/ (use the bittorrent links on these)

It isn’t ORBX quality, but it is pretty good then for VFR.

I have been thinking about a DCS: M2000 multiplayer/episodic campaign

Not to hijack the discussion, but I’d totally be up for this…