I’ve decided that pretty much any campaign created by Reflected is most assuredly worth the investment in time and money. The Blue Nosed Bastards of Bodney for the Mustang is no exception, even if it is not one of his more recent offerings. To that point, it is built on the Normandy map as compared to his Wolfpack campaign, which has the benefit of being created on the Channel Map. The latter’s more developed airfields fit the WW2 narrative a bit better, as they have higher quality objects and more atmosphere. Reflected recently added a bonus mission to Blue Nosed Bastards for those owning the Channel map. If you own The Big Show campaign (and why not?) he has converted roughly half of them.

Even though this is a single player campaign, Reflected has included co-cop versions of missions 4 and 5, a nice addition that you might not be aware of unless you dig around in the campaign’s folder a bit \Eagle Dynamics\DCS World\Mods\campaigns\P-51D The Blue Nosed Bastards of Bodney.

Regardless, BNB has tons of atmosphere of its own, including detailed maps, briefing sheets, authentic voice coms, and commercial radio broadcasts to listen to as you head across the channel escorting massive (72 ship) formations of B-17Gs on the the way to strike various targets for the day. 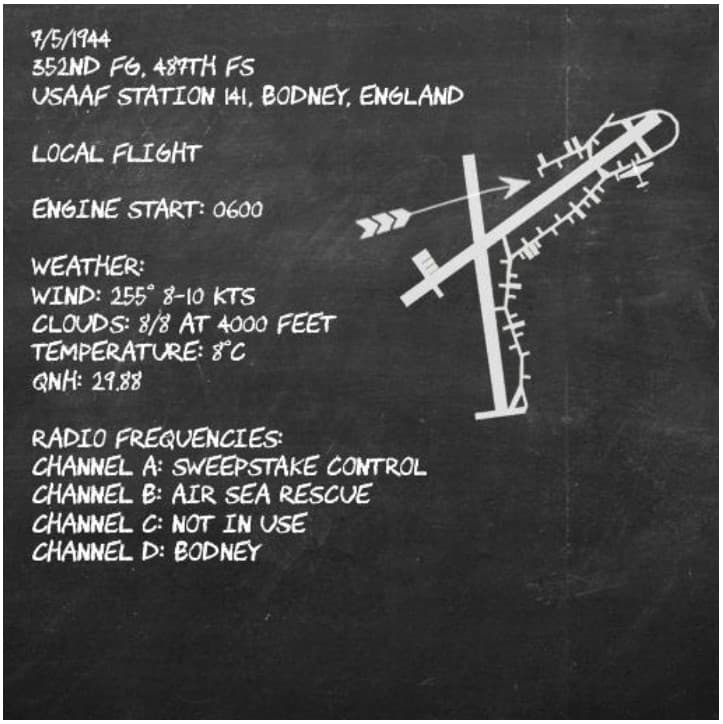 As a 352nd FG P-51D fighter pilot, flight and sometimes squadron leader, you are required to cold start, chose the correct radio channels during different stages of missions, and be on time at RV points in order to get the most out of the campaign. But by the time you complete missions 1 and 2, what were once seemingly impossible tasks (making takeoff times, engine and fuel management, and climbing to altitude with AI), become more or less routine. 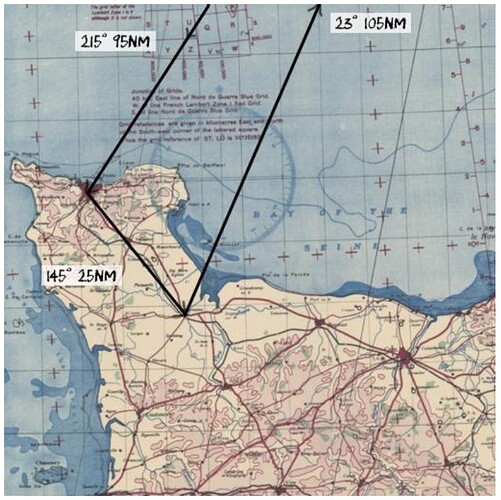 I’m through mission 4 and have somehow survived unscathed, with 3 EA in the bag. Though the missions are far from easy, I can’t help but think that Reflected slowly ramps up the difficulty, letting you get through some confidence builders before feeding you to the wolves. So far, the Antons are no big deal. But the K4s are a hand full in an even fight. As our flight rode heard on a box of tail-end-Charlies coming off of the target, we got bounced by a flight of 109s. They wisely waited until most of the bombers and escorts had moved on before executing their attack. We saved the bombers, but sadly lost number 4 from our flight. I saw his Mustang heading straight down trailing black smoke, but no chute.

Since I’m flying the campaign in VR, the screens are unfortunately dreadful. But you get the idea. 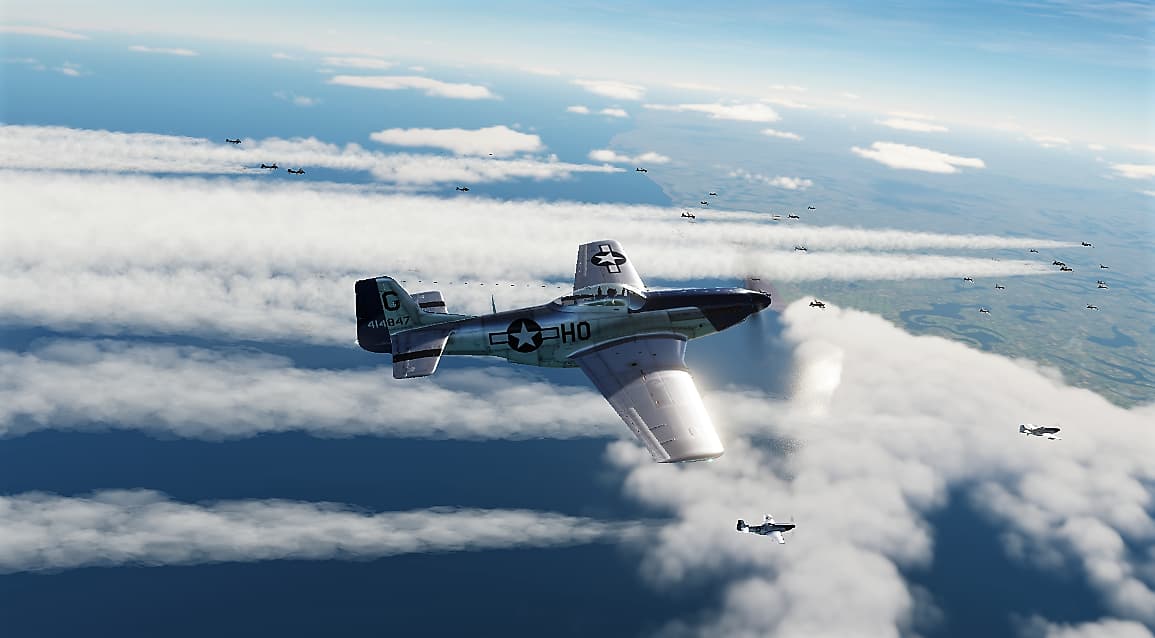 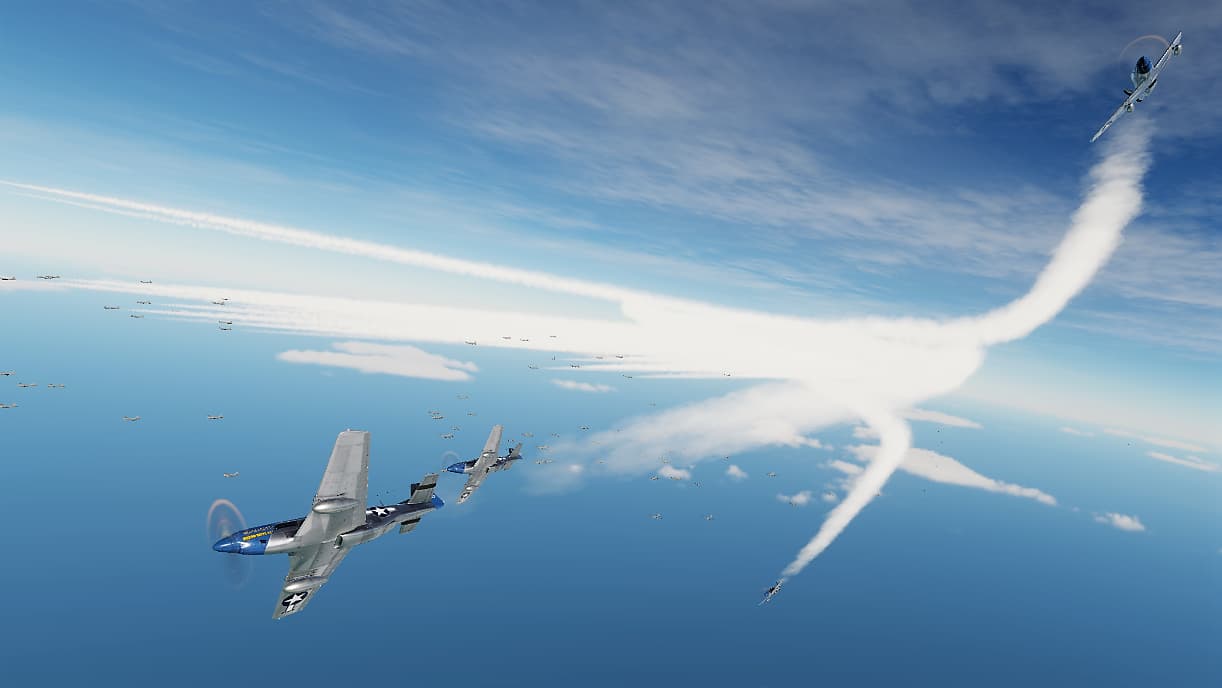 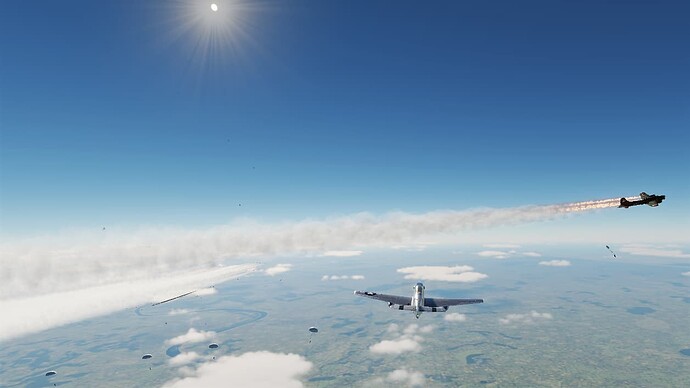 As mentioned in many encounter reports, after a huge furball, one can find themselves suddenly all alone. In the distance, I could see the main bomber formation heading for home, but none of my flight or the 109s. I set a course for England, but not long after going feet wet, approached a badly beat up Fort whom had fallen behind and below the main formation. Even though she had 4 turning and none burning, the bomber looked as if it had taken multiple hits from grape shot. Deciding not to leave her unguarded, I lowered my flaps a wee bit so that I could slow to match her airspeed and do a battle damage check. A couple of flak bursts must have exploded right on top of. A little while later, I was happy to see my wingman nuzzle up in a port echelon. In the canopy I could see a big grin and two fingers held in victory.

As bad as the Fort looked, the crew were all at their stations and waved back a few times. Brave lads indeed. No. 2 and I remained with him until he was feet dry.

Back at Bodney, No 2 taxis in. 3 was already in his spot, but sadly I walked over to no 4’s ground grew to give them the bad news. I knew that they would wait a few more hours, regardless of what I reported. 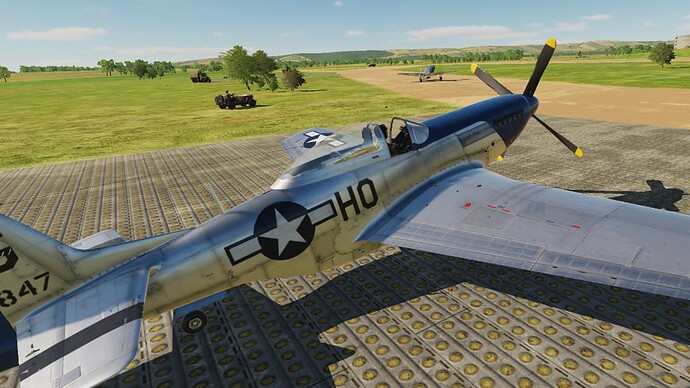 This and all of the Reflected WW2 campaigns are highly recommended for DCS warbird pilots.

Addendum: There is a bug in the Mustang added with DCS v2.7 which affects performance above critical altitude. I tried the fix below and it works well. I’ve also bound an axis to Carburetor Cold Air Control, but the LUA edit makes the cockpit levers work regardless. Plus they are also in the correct positions for startup.

the screens are unfortunately dreadful.

i.e.: those shots are awesome

Damn but that silver-back B-17 was shot up. Looked more like a flying swiss cheese.

Yeah, I wanted to watch it land, but shortly after it went feet dry in England, the whole lot of them despawmed. It probably takes a while for 60+ AI B-17s to land

A few more images from a recent escort mission.

I lead White flight of 12 Mustangs to the RV point with the 91st BG. The bombers were about 10 minutes late, which lead to some unsavory remarks from our flight. I think that they need some slack given the size of their formation.

View from above at the RV. I took a few bursts of .50 at EA when they were in the bomber stream, but didn’t take the bait when they dived. For the most part, I stayed on top and directed the defense. When we reached the flak, I kept our flight out of it, picking up the bombers as they came off the target.

We fought off two very aggressive attacks by groups of FW190s, losing two forts getting to the target, the dockyard at Rouen. Looking down at the destruction, I couldn’t help but feel sorry for the civilians. As usual, some of our bombs had been long. Damn this is a nasty business.

The bombers let us go as we neared the French coast. Doolittle has directed that we seek “targets of opportunity” while returning from missions. IMHO, that’s double-talk for “beat up the airfields”. But we have lost so many pilots doing exactly this, that I have a hard time letting everyone loose on the way home. I know that their fangs are out and they won’t listen anyway. I can’t directly countermand the general either.

Two and four were still with me as were about to go feet wet, but damn. There was a fat 190 heading back to base at about 4k. I found myself doing what I have warned others not to and rolled my Mustang in pursuit. He was nearing his base’s protective flak so I knew that this would be one pass, and most definitely haul ass. My overtaking speed was also such that if I missed, I didn’t want to give him the chance to get a shot off either. Throttle to idle, I slid in from his high 7 o’clock and sprayed him right wing root to left. As my bullets reached his left wing, it erupted in flames. I was passed him in a flash and pulling up, glanced over my left shoulder to see that he had taken to silk. Good. Let’s RTB. Four gave me a good ribbing for that all the way back to Bodney, where we found three already at the O club.

I told to myself that I will try one of those DCS WWII campaigns once the new damage model will be introduced. I still live in the other dimension, where it didnt happen (as I dont have other excuse not to try it).

Thanks NEVO. I was going to finish Wolfpack after this one, but now think that it would be more interesting to fly similar missions, but for the other side. Horrido! looks great and glad that all of the coms are in German with English subtitles.