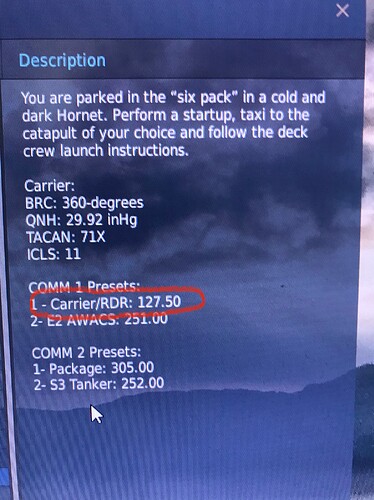 If that’s all that give for the carrier, then I would assume all communications regarding airspace management in the vicinity of the boat. You would talk to them leaving and returning to the boat. Once you depart, you would most likely switch to button 2 for AWACS to get a information on bogies and bandits. Comm2 would stay on button 1 to chat with your flight, unless you need fuel, which would call up the tanker on button 2.

I do not know what RDR stands for in this context. US carriers have 2 or three letter name abbreviations that are written all caps. GW for USS George Washington, VIN for USS Vinson, JCS for USS John C Stennis, etc.

Unfortunately I know of no carriers (since CV-59) with RDR…and none in DCS.

Regarding frequencies, DCS does a pretty good job of handling incoming aircraft commas according to recovery cases (CASE I, II, III), checking in with Marshall, switching to Tower and then LSO.

I have not checked how they handle launching aircraft. In the real world, typically all the aircraft preparing to launch are up on Tower (Air Boss; “Boss”) frequency, then switch to a controller (shipboard or E2) once airborne. Since you get “shot” off the deck, all that prelaunch coordination is the “Shooter’s” (Catapult Officer) job. When he returns your salute it essentially means “Cleared for takeoff”

When he returns your salute it essentially means “Cleared for takeoff

And if you’re not cleared for takeoff he flips you the bird?

That’s when you get the widely known, but seldom published hand signal which involves holding your forearm vertically in front of you, fist clenched, and pulling it out of your other hand clenched over the top.

LOL, I can imagine!

It’s just pulling your fist (head) out of your other tightly closed hand (your not head).

It looks like pulling a ball joint out of its socket.

When he returns your salute it essentially means “Cleared for takeoff”

I thought that salute return meant ”any last wishes?”

When I took SCUBA lessons back in the 80s, our instructor was a retired Navy frogman. That’s what they called them when he served. He was full of unconventional wisdom regarding the sport. When the class came to the point of discussing hand signals, he lectured us about the 4 most important. I’m low on air (hold closed fist to chest), I’m out of air (move a flat hand across your throat in a slicing motion), I want to buddy breath (move flat hand back and forth between mouths or regulators), and I’m not your buddy (extend forearm vertically followed by an extended index finger from closed fist. If Italian, slap bicep muscle and grimace) .

LOL, and when he kneels and touches the deck with two fingers, it means, “Ready or Not, you are going flying!”

Haha, that’s a fact! Those couple of seconds after he touches the deck, but before anything happens, are like an eternity.

Tangentially related, my roommate was at the T-2 boat. I was in the pattern with him and every once in a while you’d hear this,

“EEEEEEeEeEeEeeeeeeee!” noise, very high and very quiet on the radio. Almost like a radio squeal.

My buddy noticed it too and wondered what it was.

Then he noticed that it was only happening when he was getting shot off the cat.

Eventually he realized that it was him. With his hand wrapped around the throttle and the handgrip that carrier jets have to prevent the acceleration from forcing the throttle back, he was squeezing the Xmit switch every time he was getting shot off.

And every time, something between terror and the force of air being pushed out of his lungs was getting broadcast over the radio like the sound of a cartoon character falling off a cliff!

That’s very understandable, but memorable enough to warrant a callsign. Did he get a C/S out of the deal?

I would’ve voted for “Squeal”.

Ironically, no. His name was already a nickname and so short that it served as a sort of pseudo callsign anyway.

And so, somewhat to his lament, he never got a callsign until one night, years later, when he forgot to turn off the flash on his camera while taking a picture during NVG carrier ops…

he was squeezing the Xmit switch

“hot 'mic” - source of the most hilarious aviation-world anecdotes, from “heavy-breather” to the classic passenger cabin “welcome ladies gentlemen…” going to the wrong place (the jabs in response by everyone else on the freq are the best part), and some I can’t relate publicly.

When we first got foot-pedals to transmit with I contributed by rolling my chair onto it (the side-tone values weren’t adjusted high enough yet; couldn’t hear that I was transmitting) and after giving a standard takeover briefing to my relief, “Clipper 123 here is gonna kill Eastern 456 in about 8 minutes, watch him with this guy if you move him down…”.

Unkey the mic [pushed the chair back to get up] and from the radios, “Hey! who’s the other guy?!?, hope it’s not me!”, and the like, from a half-dozen people.

“hot 'mic” - source of the most hilarious aviation-world anecdotes

Not just aviation… It was a common occurance with the headsets we had when I was on Leopards. Radio Tx or IC was a toggle switch. Not surprising, crew chat got broadcast over the troop or squadron net quite often

Nope. It took me a bit and running the mission to figure it out. RDR is evidently a 3-letter abbreviation for “Rough Rider”. Teddy Roosevelt’s nickname for the troops he lead in the Spanish American Was the Rough Riders and this is CVN-71’s open channel radio callsign.

So when you check in to Marshal, the response is from “Rough Rider marshal”.

Thank you for that, I finally figured out that it was the 3-letter for the Roosevelt, but I’d never made the connection, just figured it was arbitrary like so many others in aviation.