interesting stuff; I think I remember this guy from ED forums 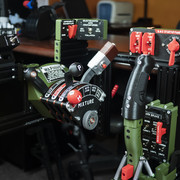 Hi fellow virtual pilots! My name is Hrvoje, from Croatia. For the past 5 years Ive been working on designing and engineering replica WWII hardware for a better, more immersive flying experience. It all started years ago as just 3d models, and few...

I had wondered what he had gotten up to, years ago he was working on a Hornet stick (before TM had announced theirs) but it got stuck in scope creep and development hell…

I dunno, reading through the thread, I’m taking a ‘believe it when I see it” approach.

I’m not an engineer, so what do I know, but from years of seeing promising starts like this fall flat, it seems like designing the hardware and making bold claims is the relatively easy part; actually producing and selling the product is the hard part.

Especially when he’s questioned on “how can you possibly deliver on all this?”, the defense is “10 years ago who thought there would be an all metal hotas, but then thrustmaster did it with the warthog!” The implication seeming to be that “technology has advanced and someone has found a better way. He further points to Virpils high quality controls as an example.

He forgot about the TM cougar, but casually dismisses correction as “missing the point”. That’s no small detail, it’s actually a critical counter point to his argument. In many ways, the warthog took a step back from the Cougar, with it’s plastic, non gimbaled internals. Illustrating it’s not like there was some technological limitation 20,30, or even 40 years ago in the controls market. TM and it’s competitors could have been making replica, high quality metal controls for years if they wanted to.

They didn’t want to, because they assumed, right or wrong, the majority of the flight sim market didn’t want to buy a $500+ hotas, or that they could deliver what the market wanted at the price the market would pay for and make a profit.

It’s all about scale, efficiency, and market forces, not technological breakthroughs.

It’s not like Virpils engineers are running laps around Thrustmaster, and that’s why Virpil is offering higher end products. Virpil set out to make a great, high quality product, and they succeeded. …But, they are making expensive, bespoke products at a much smaller scale than TM, which has accounted for larger scale manufacturing in it’s designs.

Right now, it seems he’s still in the honeymoon phase of development, building one-off prototypes to whatever spec he wants, without concern for brining things to market.

None of this is to say that I’d not be in line to buy the products if he offers them, but until I see a link to a webstore, it’s all just a ‘check out this awesome thing I made!” Post.