Couldn’t get the swipe to work. IOS problem perhaps?

27 posts were split to a new topic: DCS VR - SteamVR has encountered a critical error

FYI, I released an updated preset as a Skyrim mod on Nexus (The Sharper Eye - a lightweight VR ReShade preset at Skyrim Special Edition Nexus - Mods and Community), but it works fine for other 64bit OpenVR games as the previous releases. Might have to rename the dxgi.dll to opengl32.dll for OGL games, but otherwise you can just use it as-is for most VR games.

In this release, the sharpening filter is modified so that it only sharpens in the center of the image, but not at the edges where you can’t observe the difference, anyway, due to the lenses. That saves a little bit of performance. Whether or not that matters for you, I don’t know, but I thought I’d mention it

The author of the mod has a preset that just sharpens towards what you see in VR rather than the whole screen, makes it faster.

Will give it a go later.

Will give it a go later.

The variant from the Nexus seems to crash DCS, so a short experiment. Back to the regular one from Github in the OP.

The variant from the Nexus seems to crash DCS, so a short experiment. Back to the regular one from Github in the OP.

Because I like this mod so much, I am keen to use the latest and get it working as best I can. The version from NexusMods does crash DCS but then I thought ‘hang on, these are just shader text files’ (GPU’s have a shader language called Higher-Level Shading Language HLSL that are sort of like mini-programs to apply to the buffer, but basically it’s like source code text).

So I got it to work, and it’s great. The nice thing is the efficiency is now that the sharpening only happens from the center out, meaning it’s not wasting time working on stuff you can’t even see in VR, sort of like the other VR DCS mod with mask size.

Here’s the steps to get it to work for anyone left following this topic:

Author attributes etc are in the files, so hopefully ok to distribute here rather than run some site registration gauntlet.

Really happy with how it looks now, all working great.

for anyone left following this topic

Nice job there! Will try it out.

I have slight problems trying this out.
I am using standalone DCS along with legacy Rift CV1.
I dumped the files into dcsFolder/bin - which did exactly nothing.

Then I took the hint from the Readme and replaced dxgi.dll in the in folder with the one from Reshard (64bits).
Well this did work up to the point, that I can clear enable/disable the shader and open up the settings panel with END / HOME keys.

BUT:
The shader is only applied to the mirrored game window on my monitor - nothing happens in the HMD. Also the Reshade Settings overlay is only showed on the mirrored view.

None of the settings are applied (Contrast, Saturation, Brightness and Sharpening), where you can clearly see the shader being active on the mirrored window but not on the HMD.

Anyone experienced this as well?

The hook for VR only activates for SteamVR (AKA OpenVR). I think there is a command line parameter to launch DCS (standalone or Steam edition) so that the Rift uses OpenVR rather than the Oculus SDK but can’t find it on a quick google. I think @SkateZilla’s launcher tool has a switch/button for that case though, so worth a look at that.

A nice I see.
I actually fiddled around with that topic as well (SteamVR over Oculus native) but could (also) find nothing on google.

Yeah, let us know if you get it working.

I think it’s an option somewhere in here… 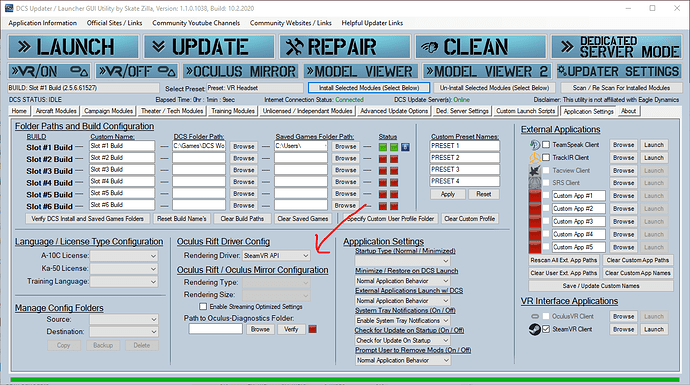 If @SkateZilla is around then he can also tell us how he does it, so maybe just something like ‘bin/DCS.exe --openvr’ or something, not sure.

there is commandline to force steamvrapi over oculus.

the setting is incorrectly placed under the oculus settings in previous versions of the GUI utility, has since beem renamed and moved to a VR configuration section.

there is commandline to force steamvrapi over oculus.

Cool - can you remember what it is, I could never find it online?

I will be home in a few and verify.

I personally havent used it in a while, ED may have disabled it,

Just tested it, still works, for Oculus Headset, It launches Both, but SteamVR is controlling the Program.

Yep, verified working, although I had to use the manual shortcut - which does not matter

Thanks for the help

in the App just change driver to SteamVR and it should launch that way too.