So this isn’t a proper AAR, more like just something to get my thoughts down and share the experience and the learning of using a Tomcat dual cockpit, with my first try as a RIO. I think a lot of it will be wrong, but hopefully people will come along and correct it as we find stuff out.

First off, it’s a great seat and an amazing feeling to just sit back there and do a job different from flying. I had spent some time in MP with the Gazelle but this is in a different league.

Parts of the RIO job I was sort of finding out about as I went:

Getting The Big Picture

To my surprise, the situational awareness in the Tomcat is really good. The combination of a zoomed out TID mode (the big round display), an AWACs up and looking, and the Datalink working is fantastic. Here’s the Ground Stab view, where North is up, and the view around the aircraft is shown. 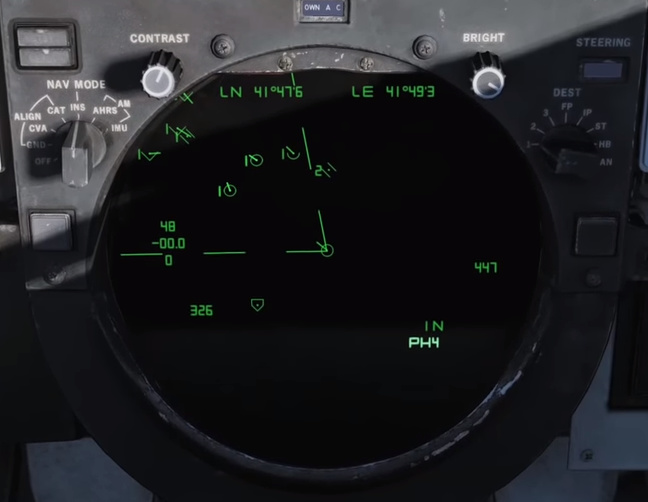 This shows the homebase boat (to the right of the ‘326’ number), the cone of our radar looking top left and the symbol for waypoint ‘2’, which looks like this:

The waypoints on this display provided a great frame of reference for where everything was, and provided a quick orientation at all times to where things were coming and going from.

I’m not going to try to teach what all that does because (a) there’s great videos out already and (b) I’ll get it wrong, but it did surprise me how usable this view was from a situation awareness point of view.

With the big picture view on, it was easy to hook up targets and then talk to the guy in front to provide some commentary on where things were. I felt like a local AWACs reading a picture back.

One of the things things obvious on retrospect was that pilot and RIO talk a lot as they fly around, and in an open Discord channel that’s not so ideal. I think something like SRS with separate channels is going to be far more useful here (plus sounds cooler).

When hooked in TWS, the datalink sort of gives a false sense of security of how well your aircraft is sensing targets, in that I needed to flip on/off the datalink mode switch to ensure we could get a possible STT lock for AIM-7’s. Because I could easily hook stuff up outside our radar cone/elevation, when it come to locking it was deceptively hard. With AIM-54’s all is pretty straightforward, in that it will do what you expect and happily select stuff that’s fed to you DL rather than radar.

Talking On A Target

One thing I did struggle with was how best to talk on a target, and given that poor old @Franze had me turn up and surprise him in the back. The hooked target readout looks like this:

and then after a second or two, looks like this:

So what I thought I would do would be do a ‘Bearing, Range, Altitude, Aspect’ (BRAA). The Bearing is shown in relative to our heading, so the ‘2’ shows it it is 2 degrees to our right. A ‘355’ would be 5 degrees to our left. I think what @Franze really wanted would be which bearing should we point at, so in the end I just ended up quickly just subtracting/adding from our heading or saying ‘he’s to our left’, ‘he’s straight on’. Not sure what the right thing to do here is.

Range was easy, as was altitude. The ‘MC’ I think stands for ‘magnetic course’, which I rarely relayed, as more just talked ‘aspect’ in that ‘he’s hot’, ‘he’s cold’, ‘he’s cranking left’ etc.

I never really felt I got the talk on quite right, but it is something that will come with a bit of practice.

For AIM-54s, I let the pilot fire them, although I guess sometimes the RIO does it?

A lot of the work seemed to be when near targets appeared (often by Datalink) it would be going to ‘Pulse Search’ mode from long distance and then using the DDD cursor to hook something so I could press the IFF button. It worked pretty well. The weird little display by the left leg (with the paper scrolling display thing) worked great at the FRIEND / HOSTILE catgorization.

I did find that if we lost a track then it would lose categorization pretty quickly. The datalink from other aircraft in the air seemed to provide categorization nicely, so often it was a case of confirming the other side of the HAFU to be hostile (or rather not return those IFF bars on the DDD).

I liked the IFF mini-game as I felt useful.

So we had a good big picture, we could fire Phoenixes in TWS, often with Datalink info but the thing I struggled the most with was keeping a hard lock on to guide an AIM-7. Here’s what I tried to do:

The Merge and Countermeasures

Once things were up-close I felt my main job was just to keep my head on a swivel and try not to put @Franze off to much. Once he had yelled ‘sidewinder’ then I tried to take my head out of my beautiful office and try visual spotting and keeping my eyes on the bad guy ('he’s behind us, top left etc). In VR Magoo-vision it was hard, but great fun.

I did throw down some chaff and flares at what seemed like appropriate moments, but lots to learn here in the countermeasures programs. I generally just mashed the buttons I had in binding on my stick, but it did feel cool. In reality I think they use the hand holds here, and as I lept around in VR it certainly felt fun.

Once we were bingo and heading back to the boat, I had a go at tuning the TACAN and trying to help out on that. I think I got it to the right frequency and T/R but messed up on the Pilot / RIO switch, which I think controls who does the TACAN or not. Next time though.

For coming back to the boat I didn’t do much other than relax and look out the windows. Once @Franze was entering the groove and nearing the ball I made some call outs of what I was seeing (it was easy for me to zoom in and say stuff, ‘you’re high’ etc) which might have helped. Because of all his Scooter time, he didn’t really need any help though. The landing in VR while not being able to control things was an experience for sure. Neat.

So just getting started I think. Only played a few hours, but so far so good. Very stable, no crashes or performance problems. Just a whole lot of learning to do now…

…you think that is a lot…you should hear them in the ready room!

For AIM-54s, I let the pilot fire them, although I guess sometimes the RIO does it?

Almost exclusively RIO launched at long range, bomber-size targets. Closer in? Fighter targets? It’s whatever you and your pilot worked out.

In reality I think they use the hand holds here, and as I lept around in VR it certainly felt fun.

Yes they did. So the idea was the RIO, grabs the handhold and uses it to position/stead himself as he twists his body to one side and the other, looking mostly around in the areas where the pilot generally cannot see - call it from the wing line aft.

In that position, the RIO is going to see a missile come off an opponent in the rear quarter - his hand is already placed to hit the Chaff / Flares with his thumb.

Awesome! Not sure when I am going to be up to the challenge of back-seat time.

Thanks @Fridge - I’m enjoying it a lot so far. You know me, I love my buttons…

In some ways it is a really good gaming ‘co-op’ experience, in that I feel a lot of it just going to be learning to work as a good pilot / RIO team, and working out how best to communicate. It really brings a different dimension to DCS when compared to the Hornet.

I haven’t even looked at the LANTIRN yet…

Great write-up! It certainly sounds from your descriptions and others I’ve read about the Heatblur Tomcat that DCS has hit a whole new level of simulation goodness.

I think the common tactic for using pulse STT is to actually tell your pilot to fly a tad lower than the target. Pulse mode is almost immune to notching but it suffers from ground returns.

That’s an awesome report and overview of some of what you saw. It’s interesting to see the rear cockpit so gorgeous and functional, it was never that way when I saw it a few months ago and I skipped all the updates between then and release to preserve the WOW factor…and…WOW! I mean, I should have known based on the front cockpit artwork and modeling that it’d be awesome, but it really, really looks great.

The Tornado has those too- almost identical.

You had me at Tornado…