I just learned that he died earlier this year.
He and his fellow aircrews saved a lot of people. 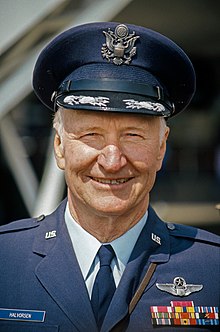 COL Gail Seymour “The Candy Bomber” Halvorsen (October 10, 1920 – February 16, 2022) was a senior officer and command pilot in the United States Air Force. He is best known as the "Berlin Candy Bomber" or "Uncle Wiggly Wings" and gained fame for dropping candy to German children during the Berlin Airlift from 1948 to 1949. Halvorsen grew up in rural Utah and always had a desire to fly. He earned his private pilot's license in 1941 and then joined the Civil Air Patrol. He joined the United Sta...

I’ll never forget when Mrs. Microbiology lived in Berlin, just under the approach to Tempelhof… I was visiting and heard the rumble of big pistons coming in. I went out to the balcony just in time to see the C-47 ”Candy Bomber” flying overhead.
The crews working the Berlin Airlift were heroes, each and every one.