A bright, mostly clear day is always a great day for flying, especially when flying a WWI crate - there are very few aircraft that connect pilots to flight as closely as these birds did. 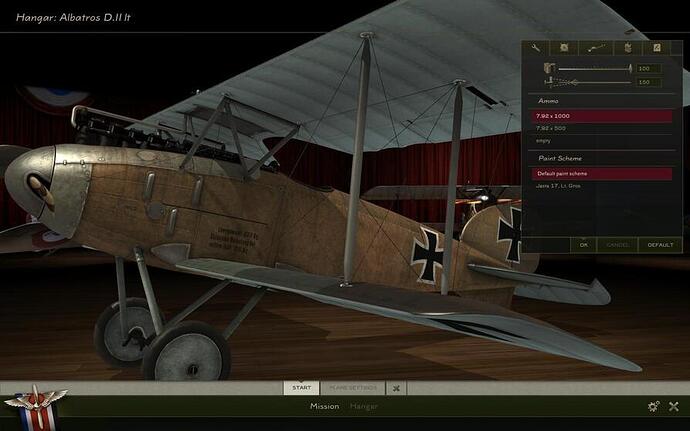 Today’s Career mission is a Line Patrol along the no-man’s zone at Arras. Hanz von Ganzs reports in as #3 in the flight of Albatros D.IIs. Start up is as easy as pressing a button (‘E’), but, as usual, right after takeoff my flight streaks off at full power, slowly pulling away from me. 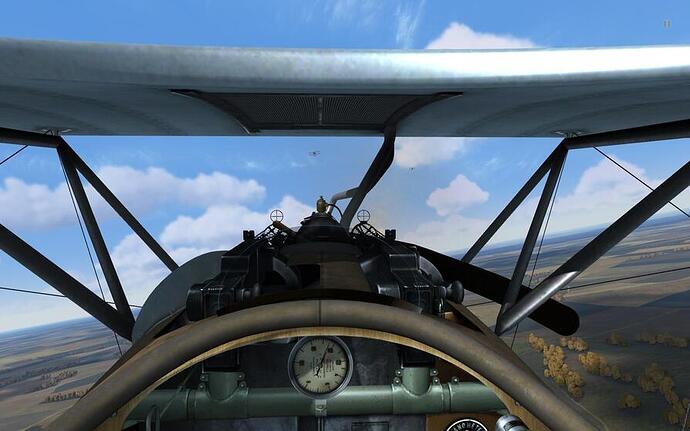 This almost always happens to me in RoF. I don’t know if this is an issue with my controllers (throttle axis need some saturation?), my technique (not fully coordinated flight?), or if it’s just bad AI lead behavior (lead should always pull back a little throttle to enable wingmen to stay with them), but it’s a very frustrating experience. In most cases, I miss out on the action, and often end up flying home solo, but that’s not the case today!

Just a few minutes after takeoff, before the flight can get too far ahead of me, I spot some flashes of light off in the distance. Were those tracers? Yup, tracers. Someone is attacking one of our balloons! 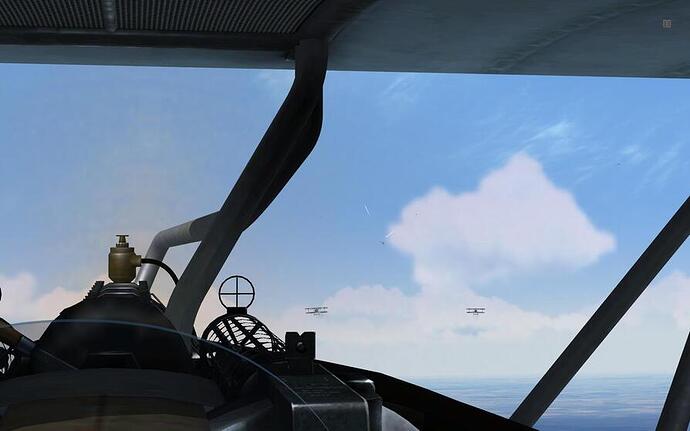 Before we even get close to the balloon however, I catch a dark speck, way above us, maneuvering to get behind us. The speck dives and turns in, and I’m able to see the roundels as it overshoots us. 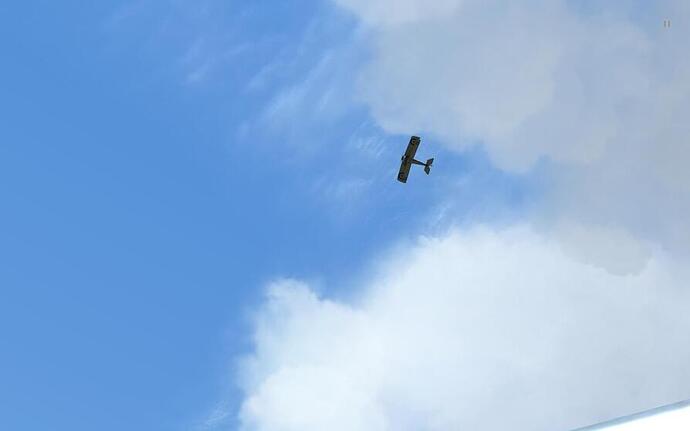 The Nieuport singles me out and turns in again. His zealousness defeats him, however, and he overshoots again - a grievous tactical error. 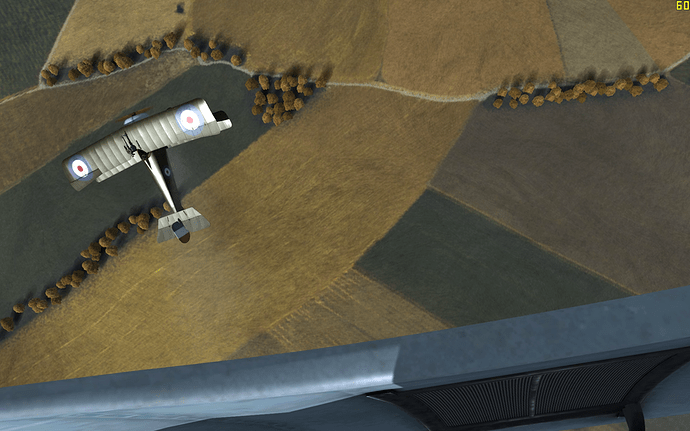 I immediately turn in and we begin our dance. The Nieuport throws energy away in every turn, but demonstrates they can gain it back quicker than my Albatros. I need to keep him turning… 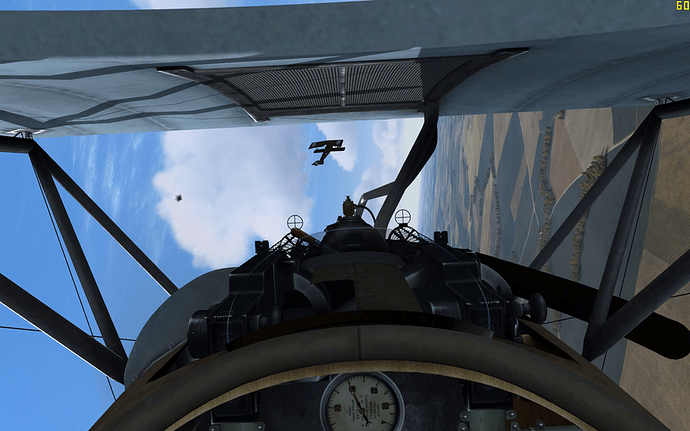 I keep the Nieuport on their toes, constantly lagging back into position on his six. Although we’re just a few hundred meters above the ground, the Nieuport snaps their wing over and tries to execute a split-s. I extend straight and level, certain I’m about to witness a fiery crash. 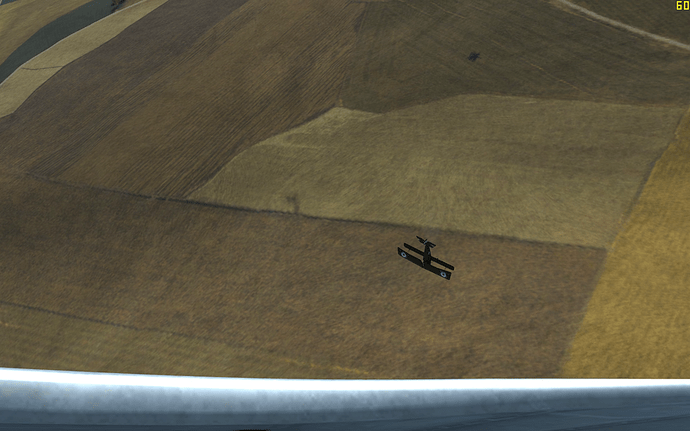 Miraculously, the pilot avoids the ground, but the tremendous loss in energy puts me at a significant advantage. I execute a simple barrel roll to get onto their six and then line up the first shots of the engagement. 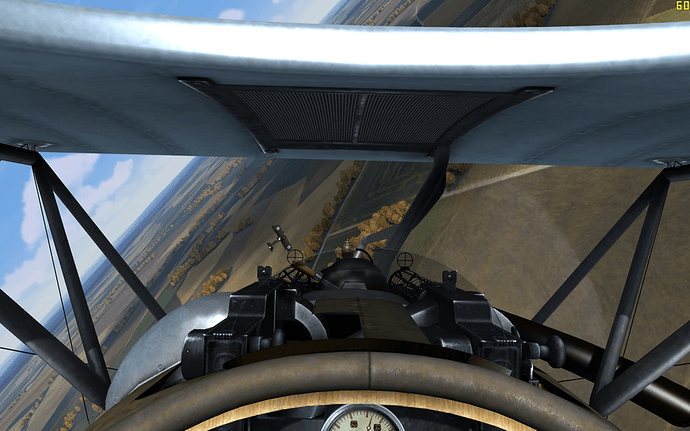 Undeterred, the Nieuport continues to fight, banking and yanking aggressively and almost at random. At one point, my energy excess leads me to nearly overshoot the Allied aircraft, and I pull into a high yo-yo to get back onto their tail. During the transition, however, we end up head-to-head - a potentially fatal situation for either of us. 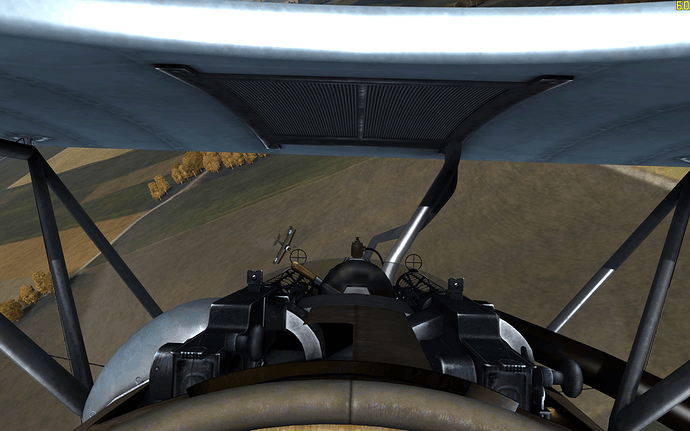 Neither of us can line up a shot and we pass through the merge, nose to tail. With the superior energy, it’s just a matter of a couple of turns before I end up saddled back on their six and start connecting with tracking gun shots. 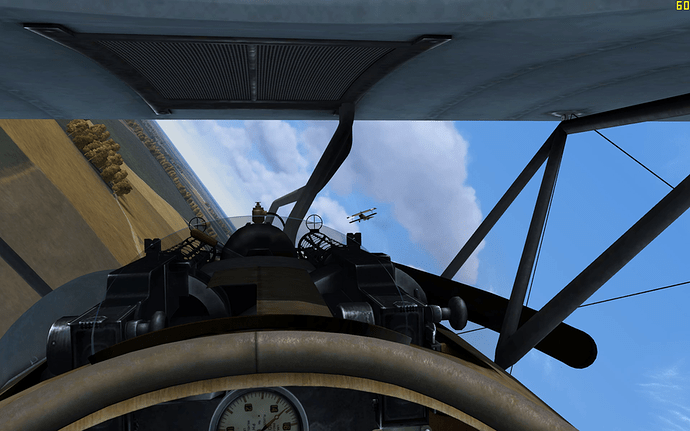 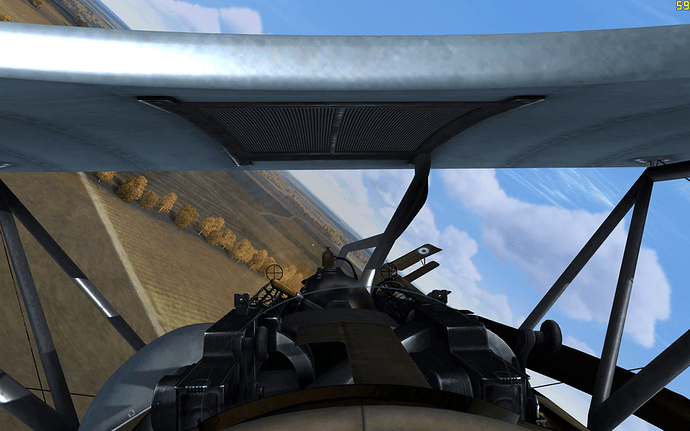 Although the enemy pilot continues to fight for their life – vigorously jinking and banking to throw off my aim – the airframe fabric is showing signs of shots that hit home, and, after one particular pass, the plane’s movements become even more erratic but slower - a sure sign of pilot injury. 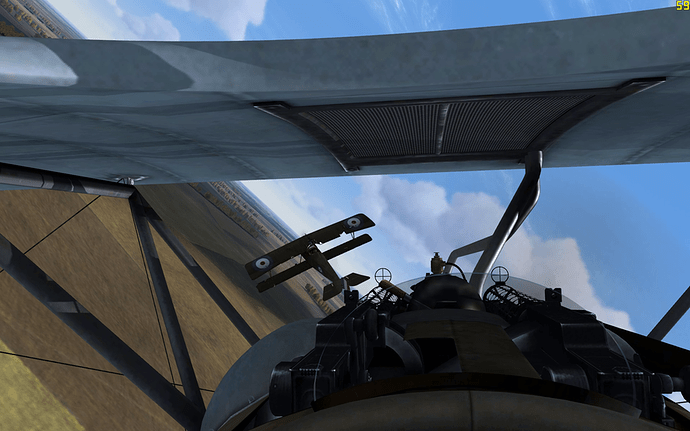 Confident I’ve won this battle, I clear my six and slowly saddle up again for the final salvo. The shots are well concentrated in the cockpit area. I must have hit something critical because suddenly the Nieuport is coming to a sudden stop in the sky and I have to sweve to the side to avoid a collision. As we pass within a few meters of each other, the conclusion of the fight becomes painfully obvious. 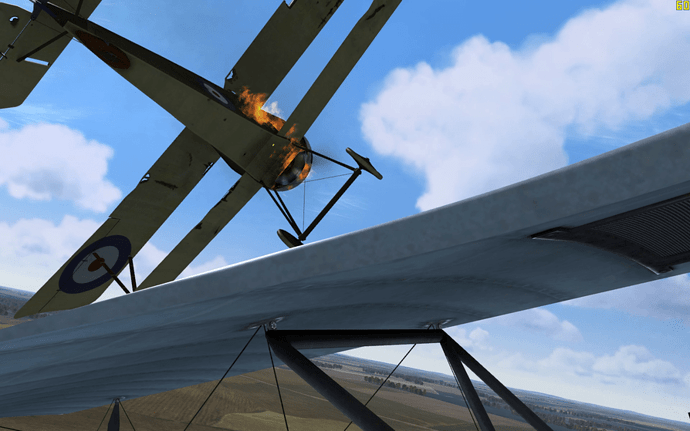 I can hear the engine grinding to a stop and I’m almost sure I can hear the flames crackling. I’m not able to see the pilot through the blaze, but the propeller stops as the engine seizes and the burning aircraft gracefully plummets to the field below. 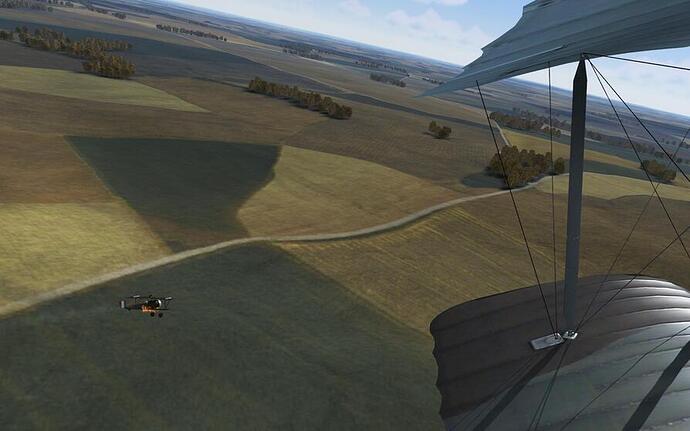 Both thrilled and horrified by my first kill of the day, I turn back towards my flight’s last direction to see if I can rejoin with them and continue the patrol.

I turn back to the north, the direction I expect the rest of my flight has gone, and I immediately see two separate groups of aircraft. One group has clouds of flak popping up around it and, since we’re still on our side of No-Man’s land, I’m taking it as a good since it’s an enemy flight. 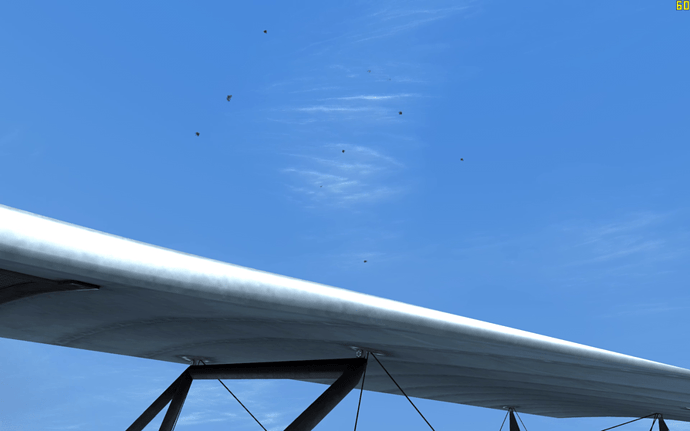 Sure enough, one of the aircraft begins maneuvering to get behind me, and I turn with him, climbing as I build energy for the inevitable fight.

In a flash, we’re merged, and I’m shocked to see the blue banner of a flight leader on the wing of my adversary. This will not be easy. 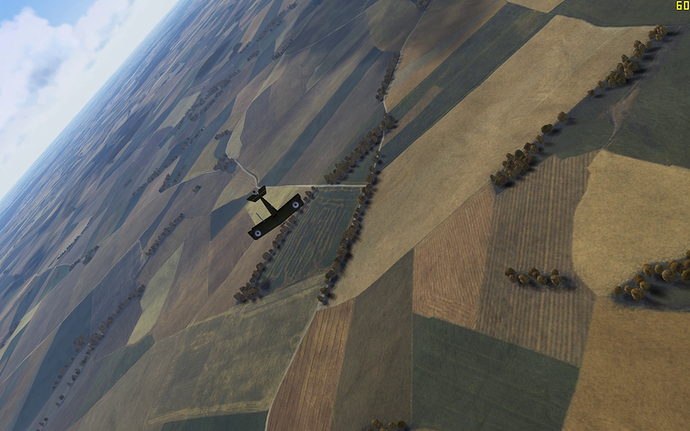 This particular leader, however, is not much of a dogfighter. Predictable and wasteful, it’s hardly a challenge to stay on the aircraft’s rear. I fire snapshot bursts into his aircraft as the opportunities arise, and the hits take their toll. 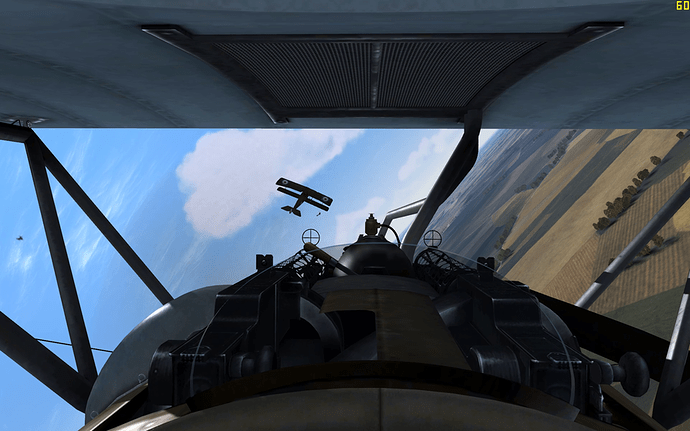 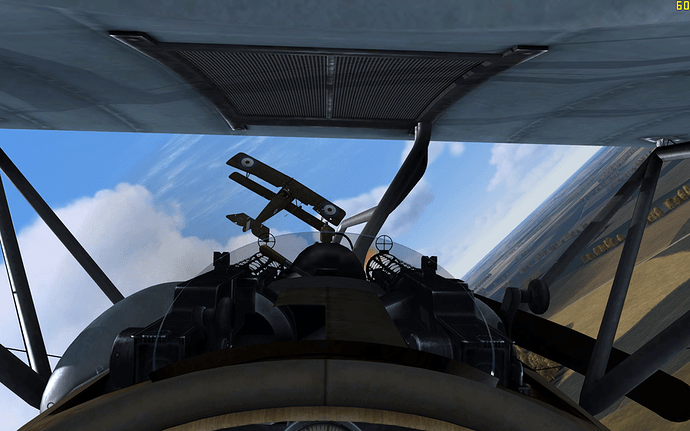 After four or five bursts, I see the lower wing starting to bend, indicating structural failure, and I just watch as the aircraft folds in on itself. Another victory.

Once again, I search for my fellow wingmen and, once again, I spot enemy aircraft. This time its a gaggle of friendlies (my flight?) harassing a larger plane - looks like an FE 2b. 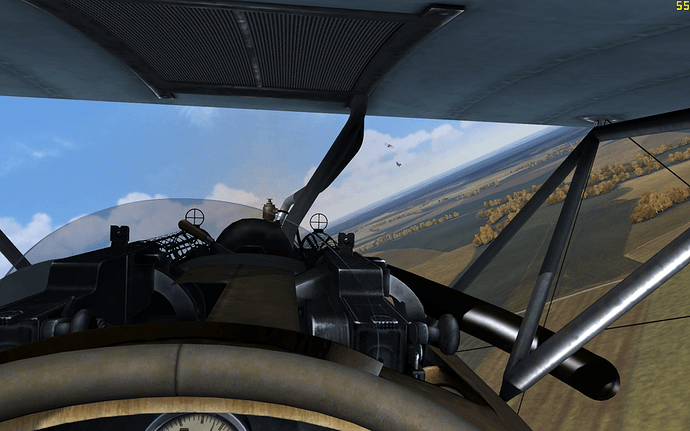 The fight heads my way, the FE 2b stampeding headlong into my aircraft. I pull up to avoid an impact and hammerhead around to get on his six. From my higher vantage point it’s clear the aircraft is in serious trouble. 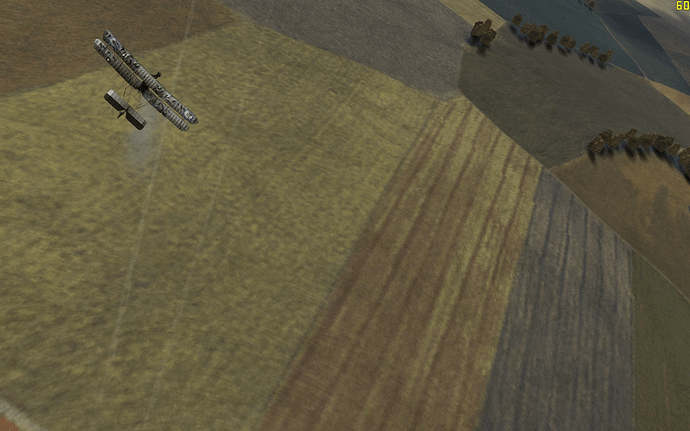 The front gun is manned, but the aircrew must be reloading as I line up as they don’t fire back at all. I unload into the aircraft, amazed I still have any ammo left. The hits tear up the FE, but she stubbornly stays in the air. 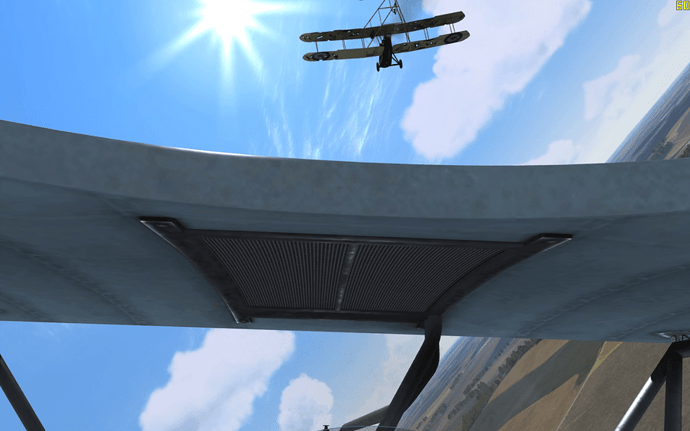 Slow to begin with, the large aircraft grows more sluggish with the battle damage - a fact I did not appreciate as I bore in for my third pass. The shots hit the fuselage, but the propellers continue to spin. Fixated I try to drive my bullet stream into the engine before realizing the closure rate is much too high. I swerve to avoid a collision - but it’s too late. 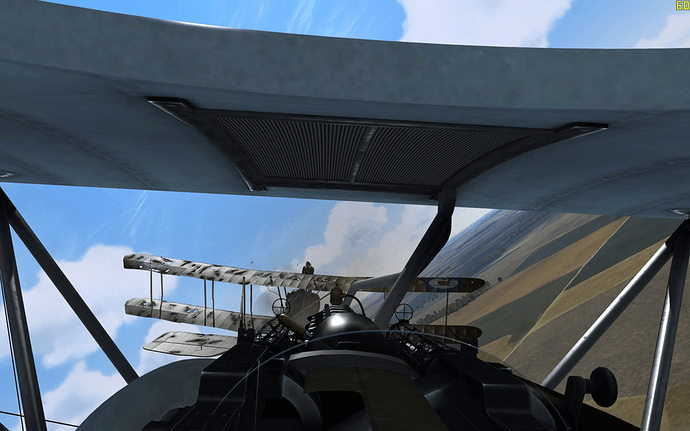 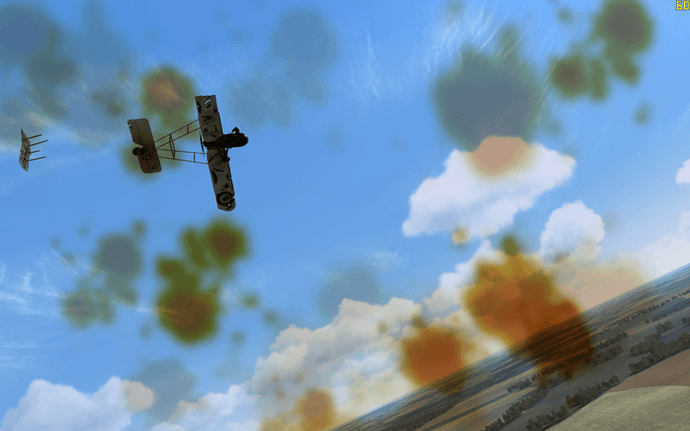 Engine and prop gone, I still have control of my aircraft - more than I can say for the crew of the doomed FE 2b.

I make a safe and soft landing in a nearby field, and am thankful my mistake occurred over friendly territory - had I made the same emergency landing on the Allied side of the line, there would be a good chance I’d never make it back to my squadron.

Wow…great write up! I feel bad that you shot down Dart and his Nieuport

So how does the sim handle the off-airport landing - you lose an airframe in the campaign or anything? I don’t know much about RoF campaigns…

With regard to losing your flight lead because they dash off so fast, I’ve learned that it seems to help to stay level at low altitude to build up speed, then climb gradually, keeping your flight lead or the #2 visible a little bit below your top wing.

With regard to losing your flight lead because they dash off so fast, I’ve learned that it seems to help to stay level at low altitude to build up speed, then climb gradually, keeping your flight lead or the #2 visible a little bit below your top wing.

Great write up. With regard to always chasing flight lead. I agree what Navynuke99 said and would add that when in the hanger, make sure you carefully set the fuel level to what you are really going to need. Too much and you will definitely be slower, too little and…well you’ll be in trouble.