A farewell movie to the F-16, from the Royal Norwegian Air Force.
Narration and interviews in norwegian, but pictures and video for all those fluent in Aviation… I like it on a capability level but not on an aesthetic level, if that makes any sense.

I disagree (but each to his own

) because I I the F22 is a thing of utterly sublime beauty.
Every military plane has always been form following function. They build them to do a job and the looks will always be 2nd to that.

I agree that the older planes do have a beauty to them but the way the lines are created on newer stuff like the Raptor, Rafale and Gripen is just epic. You don’t get sweeping curves on any other birds

the F22 is a thing of utterly sublime beauty

I also think the Raptor is good looking.
But as you say, to each their own.
There are a lot of older airframes that we consider beautiful, but can’t be called sleek, other than served with a good dose of irony.

F-4 Phantom?
AJ/JA 37 Viggen?
F-14 Tomcat?
I could go on, but my point is that none of those have what I would call sleek lines, but boy are they beautiful!

And then there are certain aircraft that stand out in the crowd, so to speak. I think the F-16 is one of those, along with the Spitfire. Of course, that’s the F-16 I fell in love with in my youth. Before CFTs and scab plates.

I think I may not of explained myself. @clutch mentioned the new style of function before form. But my argument is that it’s always been that way.
Tomcat is the most beautiful aircraft ever devised by the hand of man in my opinion
Even the spitfire only has its iconic shape because of its function. Still utterly beautiful.

Im of the opinion that as technology moves on and we find new ways to optimise the roles of these planes that the form will obviously naturally follow suit. Take the F117 vs the B2 vs the F22. We have optimised stealth and the form has followed.
All 3 planes are beautiful in their own right and all follow the function over form.

You may of noticed that I haven’t mentioned the F35. I’m not convinced that it is a beautiful aircraft. Cool, definitely. But is the multiple roles, multi platform nature of the plane diluting the form? Its a compromise aircraft. Gripen is a single engine, multi role fighter with a loosely similar mission on paper. But without the electronic warfare and Vtol needed in its design its a much sleeker more focused shape and much prettier for it.

I may not of explained myself

I’m not disagreeing with you. Just adding my thoughts on the matter.

I know mate, I just think I ramble off on tangents without explaining myself enough sometimes

Aesthetics is a personal thing. I see truth in what both @Clutch and @Victork2 are saying, as I understand them. For years the “function” was speed and maneuverability–requiring low drag, low weight and low lateral and longitudinal inertia. Those things forced planes to look like Spitfires and F-5s. Modern “function” adds with equal importance low observability, high payload and long loiter. The beholder decides for himself if the form forced by these new requirements improve or ruin the aesthetic. I am of the camp the finds the F-35 grotesque.

I am of the camp the finds the F-35 grotesque

I don’t hate the way it looks, I just don’t really like it either. The B model in hover mode looks AMAZING. But it isn’t beautiful doing it. It looks like it’s making a meal of it frankly. But while it’s definitely not the ugliest plane I’ve ever seen (and no that is not the bloody Gannet @schurem that’s beautiful too) it certainly isn’t the graceful beauty of the Raptor, the sleek and dangerous looking Su-57 or the mighty looking J-20.
I LOVE the looks of the J-20 BTW.

I don’t really like stealth aircraft. IMO aircraft looks peaked with the F-16, the F-14 and the Su-27. And Concorde of course. Stealth aircraft are grey, often dark grey. An early tomcat has all kinds of beautiful colours. Gloss light grey, white, red inside the moving parts, etc. And beautiful markings that show pride and esprit de corps. 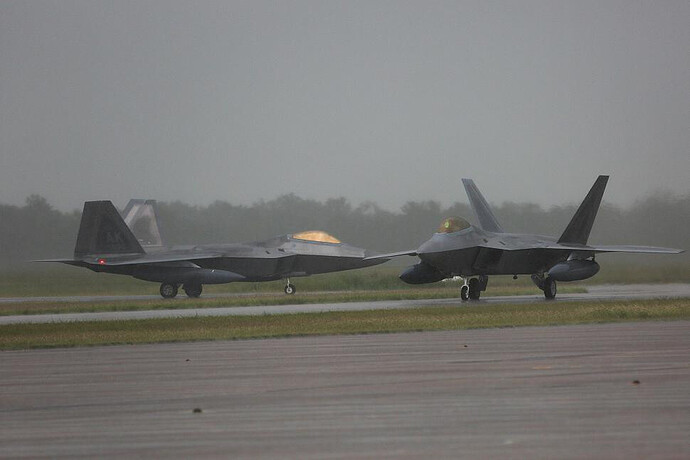 For me the machines from the time when aerodynamics trumped everything, yet were still a matter of intuition and taste (and a whole lot of slide-rule mathematics!), those machines look best. Machines built by teams that were often led by one or just a few people you’d know by name as an afficienado instead of a faceless comittee of functionaries. Heineman’s hotrod, Kellies’ folly, Tom’s cat. 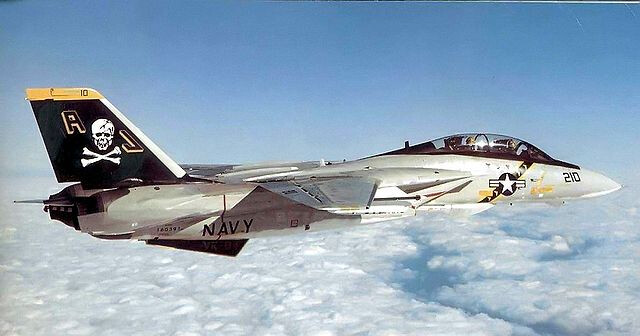 I don’t like stealth aircraft. It’s just not the sort of tactics I like, to hide and sneak up on some fool, bludgeon them from behind unwittingly. Blegh. Real men form a line abreast at angels 35, radiate the entire northern hemisphere with their mighty AWG-9s and run at the enemy at mach 2.4 firing sparrows at practically WVR. It’s how it was done when men had mustaches and partysuits and slinking about unseen was left to the sort of guy who’d rather be in a long tube full of seamen.

RoNAF over the Med during Unified Protector (Libya) 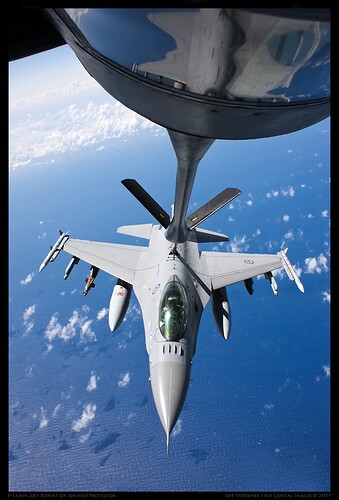 I am of the camp the finds the F-35 grotesque.

I was thinking the same until I saw it live close to a Tornado and an EFA.
Now I think it’s small and cute.

Very cool video, there’s an obvious love for the jet there.

Similar love has happened with Hornets in Switzerland, Canada and Australia - they have one jet they’re proud of, it’s almost part of the national identity.

I mourn quietly as a child of the 80’s seeing these fourth-gen jets being retired. They’ll always be my own first love.

Indeed. It doesn’t have to share the love, unlike in the USA where kids groing up can have different favorite fighters.

They’ll always be my own first love.

Same here. I still have my copy of the Swedish aviation magazine Mach, where they present the neighbors (Norway) new fighter jet…

I don’t think this thread has answered: what will replace the F-16?

what will replace the F-16?

The F-35A has already entered service with the RNoAF. They are in the vid.