Hard to believe, right? Took advantage of the recent sale to purchase an EVGA FTW3 Ultra. Beautiful card, which runs cool. But…doesn’t work the a G2 or a G1. Not vendor specific BTW. So this morning I grabbed the kids Quest2 and get back up to speed with all things Meta. 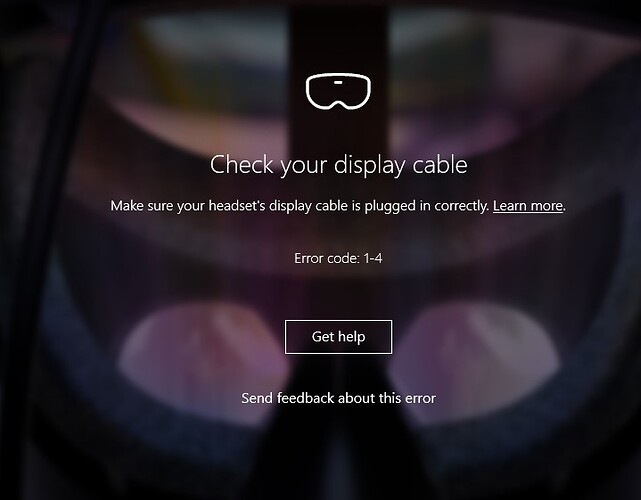 Is it factory overclocked?

That’s too bad. There must be a way though, right? Both the card and the headset have been around for over a year. As for me, after I installed my 3080ti, X-Plane would only run in OpenGL (no Vulcan or Metal). But after running the latest drivers from Nvidia, it eventually behaved itself.

What kind of problem are you having? Isn’t it the (in)famous usb connection? We discussed that one here on Mudspike as well.

I had that usb problem too but solved it eventually.

The error is 1-4, check display cable. That sent me in a 2 hour wild goose chase juggling cables. It’s a know issue to Nvidia and HP. So far, they haven’t solved it. Plenty of discussions about it.

I haven’t overclocked the card. Just default out of the box.

I haven’t overclocked the card

No, but is it factory overclocked?
Just trying to rule out possible causes.
What kind of mobo and cpu?
It worked on the old GPU with the same mobo/cpu combo?

Also worth checking the cable connection to the headset. Any chance that may have wiggled out a litte?

Before I answer these, the problem has been known to Nvidia and HP engineers for around 4 ,months, judging by their responses in various forums. Reddit HP Reverb forum has a good thread on it.

Rebooted a number of times, tried older drivers, and finally gave up and started searching. I had cables and headsets scattered all over my home office last night. Should have bailed early and used Google in the beginning. Probably like most of you, thought that I was doing something wrong.

To quote @HiFlyer’s link above:
"NVIDIA has identified a DisplayPort connectivity issue between certain VR headsets and our GeForce RTX 3090 Ti:

Never mind. The G1 and G2 cables are a completely different connector on the headset side. They look similar, but the G2 is quite a bit smaller.

Ok. Never had a problem with my 3090, besides those associated with AMD mobo chipsets. Guess this is unique to the ti editions…?

(HP Reverb with G1 cable is not affected)

BTW, my HP Reverb G1 doesn’t work. Same error. I tried plugging it in all of the 3 DP ports and both onboard and powered USB 3 hub. No joy.

Since I moved from 2080TI to 3090, I will get Windows Mixed Reality connection error with G2 after every computer start. Good thing is that in my case this can be resolved by powering the goggles off and on (using the button in cable) while the error is shown in Mixed Reality app. This resolves the error.

Frustrating yes. I had same error with my new PC (ASROCK MB, AMD5900X, G2, 3080Ti). I tried every port (usb) and found only one that worked, intermittently though. Updated stuff (BIOS, drivers, etc) and it’s worked fine for months. All I’ve got.