Action at Andigny-les-Fermes 7th November 1918.
1/5th Lincoln’s last casualties during the Great War.
B and C Companies of the Lincolns, at the centre of the advance, experienced great difficulty in crossing the Petite Helpe River. Unable to find suitable material to make a bridge, trees were felled and man-handled into the river. Captain Robin Dunn, commanding B Company, was about to be swept away by the current as he tried to secure a tree into position. Captain Charles Goodall, commander of C Company, leapt into the river and rescued his fellow officer. Eventually, between them, Dunn and Goodall managed to fix the tree trunks into position. As rest of the Companies made their way over the makeshift crossing, Captain Dunn walked forward into the village of Bellevue, it was found to be unoccupied. It was the same for all of the first objectives of the 138th Brigade. They were secured without a fight just after 8 a.m.
By mid-day contact had been made with the Battalions on both flanks and the advance continued virtually unopposed. However, during the afternoon, as the Lincolns pushed forward in the direction of the high ground to east of Haut-Lieu and Cheval Blanc they came under fire. A number of shrewdly positioned German machine-guns halted the advance. Despite several attempts by fighting patrols to press on, the fire proved to be too accurate and intense. As darkness fell and Artillery support was not yet in position, the Lincolns were forced to withdraw. These final actions of the day had come at a cost.
Captains Bull and Dunn had both been wounded as were six of the other ranks. Four of their comrades had been killed. Lance Corporal Violet Blanchard from Grimsby, Private John Bridge from Hanley in Staffordshire, Private Charles Brumpton from Ulceby and Acting Corporal William Robinson, from Grimsby. A Father of four, Robinson from Patrick Street had only returned from leave three weeks previously. He had been wounded in 1916 when serving with 6th Lincolns. The four comrades now rest in consecutive graves in Avesnes-sur-Helpe Communal Cemetery.

Acting Captain Dunn received a GSW to the right side of the back in this action and was transferred to hospital in England.

After prolonged treatment he made a good recovery and in 1919 was in a recuperation hospital near my house. Sadly the following event took place on a local road I often drive along. I will visit the spot on Remembrance day as well as thinking of Captain Dunn and Lt Pegg every time I pass. 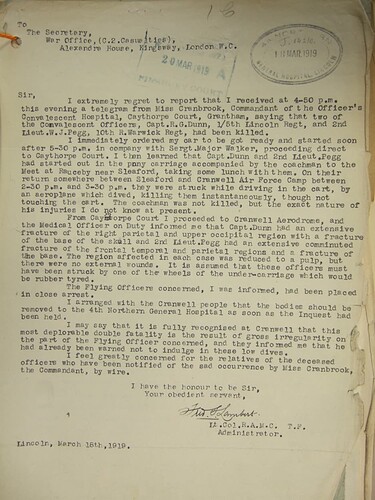 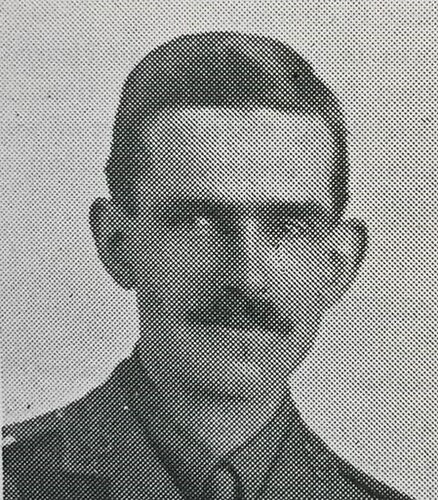 Interesting story, considering.
Is that road near the aerodrome? Seems like they suspected the pilot of misbehaviour. It would be interesting to know if he was charged with a crime. There should be records of that, right?

Is that road near the aerodrome?

Yes. It is now the A17. Between Cranwell Aviation Museum and the turn off for RAF Cranwell. Not much of a journey timewise even when propelled by one horse power.

i am sure the pilot will have been court-martialled. I shall find out from the RAF Cranwell College Hall Library/archivist

Thanks for finding that!
So he was charged with manslaughter due to gross criminal negligence, but was found not guilty and discharged.
I wonder about the incident though… A lot of details are left out, but I doubt just the wheels could’ve taken out both officers and knocking the driver unconcious. But if it was an Avro 504, as depicted in the article, the skid might have hit them? The aircraft flew across the road, and the unfortunate officers were probably sitting side by side, with the driver in front…?

Did some googling…
This page says it was a Ninak.

This should be the Trevor Chater that piloted the fateful aircraft. 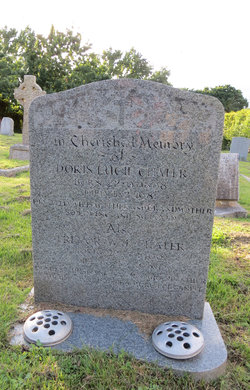 For a few quids, one can read his service records…

The official archive of the UK government. Our vision is to lead and transform information management, guarantee the survival of today's information for tomorrow and bring history to life for everyone.

Did some googling…
This page says it was a Ninak.

I’m shocked at the number of accidents listed on that page!

Well, the early days had a significantly different safety record than we have now.

I’m shocked at the number of accidents

Indeed…
The irony is that by doing that ‘dive training’ stunt, which killed those officers and led to his discharge, he might just have saved his own life.

the early days had a significantly different safety record

A lot of Darwinian selection going on back then. And it was pretty bad past WWII as well.
I don’t remember exactly when, but during a period of a few years in the 50’s or early 60’s, the SwAF had about one fatal accident…per week…! Imagine losing about 50 pilots per year, in a small country like Sweden. Granted this was during the introduction of jet aircraft and we had the worlds fourth largest airforce, but still.